Guy Crushes Woman While Doing A Backflip In Hilarious Video

Bernie, Bloomberg Teams Argue Over Who Had A Heart Attack

Jeb Bush made a surprise appearance during the Emmy Awards Sunday night. 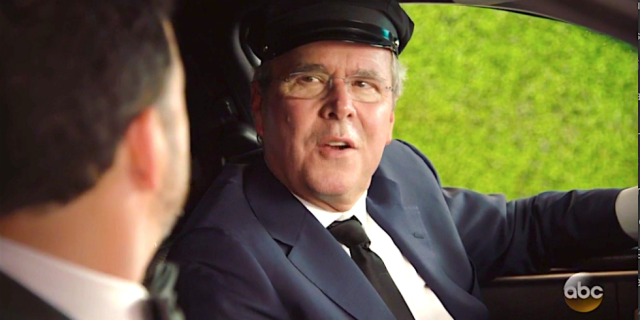 In a skit where the host Jimmy Kimmel was searching for a ride to the awards show with several celebrities — and being repeatedly turned down — he finally got in the front seat of “Veep’s” Selina Meyer’s presidential limo, which was being driven by none other than Jeb.

“I’m between jobs,” Bush explained. “Did you know you can make $12 an hour driving for Uber?”

“Are you nominated?” Bush then asked Kimmel about the awards show.

After the late night host replied yes, Bush said, “Wow, what’s that like?”

“If you run a positive campaign, the voters will ultimately make the right choice,” Bush sarcastically advised Kimmel. “Jimmy, that was a joke. Get out of the car.”

Video: #Emmys open with skit with @JimmyKimmel trying to get a limo Uber ride from @JebBush #TTT16 pic.twitter.com/6DHZZthw05

1
'Before I Even Run, I Already Lost': Track Star Behind Transgender Lawsuit Speaks Out
US
2
'Two Most Popular People In The Country' — Harry Reid Predicts Barack And Michelle Obama Will Save Democrats From Destruction In 2020
Politics
3
'Hey, I Pulled A Pelosi!': Things Take A Twist On 'The Five' When Jesse Watters Rips Up Donna Brazille's Papers
Media
4
Emails: Burisma Consultant Linked To Hunter Biden Approached Top State Department Official To Arrange Ukraine Meeting
Investigative Group
5
Mike Bloomberg Said Elderly Cancer Patients Should Be Denied Treatment
Politics