MSNBC “Morning Joe” co-host Joe Scarborough grew prickly late Monday about a CNN report claiming that he and co-host and work wife Mika Brzezinski met with Donald Trump at Trump Tower last week. The story claims they were there to “rekindle a once-rosy relationship” and hopefully get him to appear on the show.

It’s no secret that Joe and Mika once had a cushy relationship with The Donald. In their more romantic days, he’d often call into their morning program and perform for them like a circus monkey. Everyone benefited. The TV hosts even visited Trump’s  hotel room in New Hampshire during his victorious primary. When CNN reported it, Scarborough cried that the network’s sources were wrong — but again, he wouldn’t deny visiting Trump in his hotel room. Despite all their claims to be the only TV anchors on the planet to predict his rise in the presidential election, after a late spring and summer of hateful rhetoric against him, the relationship fell apart.

And the pair didn’t really seem to care too much.

Except, as CNN media writer Dylan Byers reported Monday, maybe they care more than they’ve let on. Byers reported that Scarborough and Brzezinski met with Trump last week in an effort to patch up what has become an antagonistic relationship. Trump has called Mika “neurotic” and “insecure.” In May, Joe announced that he won’t be voting for Trump. In return, Trump recently outed Joe and Mika’s supposed private life on Twitter. Neither the network nor the duo have denied any reports about their relationship.

Scarborough fired back at Byers, but it’s unclear which part of the report he is denying. 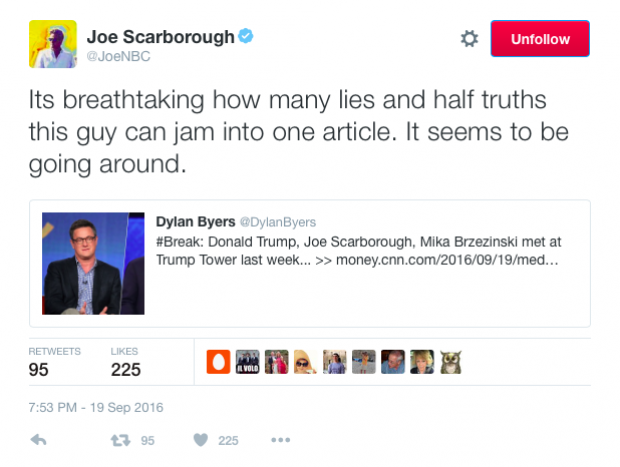 Byers stood by his reporting. He shot back that Scarborough could have returned his requests for comment. 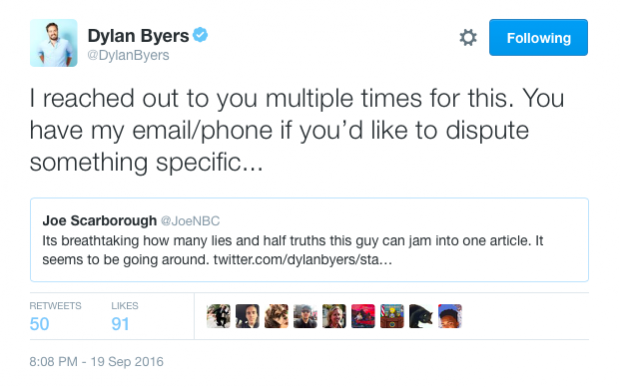 Ex-CNNer Peter Hamby — now head of news at Snapchat — ridiculed Byers’ story — not for being incorrect, but for being unnecessary. 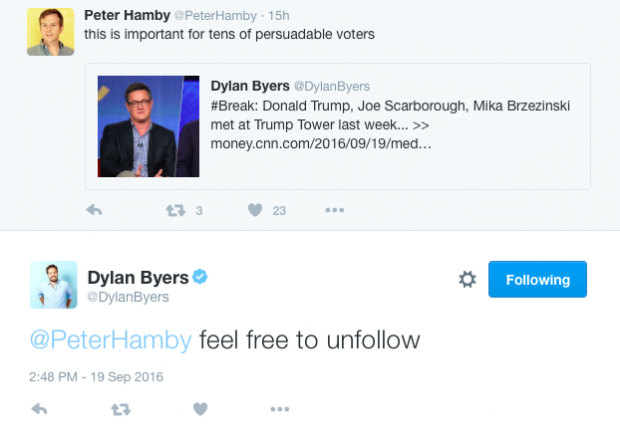 As of 7 a.m., Scarborough had not addressed the matter on his morning show.