Ted Nugent said President Barack Obama has been “peddling snake oil to our fellow black Americans,” and that he has done little to improve the lives of African-Americans.

“With the exception of politics, you can be arrested for peddling ‘snake oil,'” the 67-year-old singer started his lengthy post on his Facebook page Tuesday. Nugent criticized Obama after he told attendees at the Congressional Black Caucus Foundation that he views the black community not voting as a “personal insult.” (AUDIO: The Nuge: If You Hate Me, You Hate America) 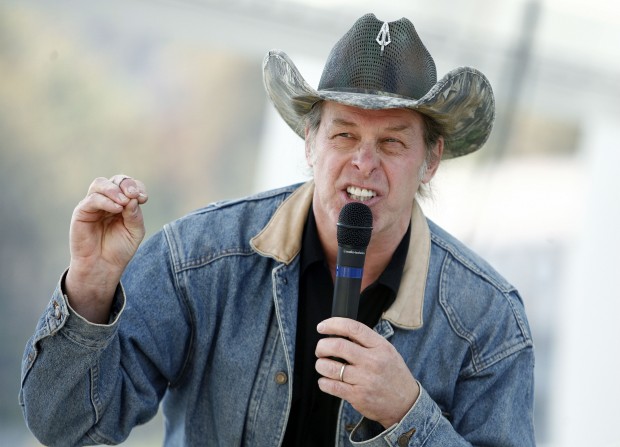 “A snake oil salesman is someone who knowingly sells fraudulent goods or who is themselves a fraud,” Nugent wrote. “He or she is more commonly known as a con man. President Obama attempted to con black Americans when he stated at the Congressional Black Caucus Foundation that he would take it as a ‘personal insult’ if black Americans fail to vote for Clinton in the upcoming election.” (AUDIO: The Nuge: If You Hate Me, You Hate America)

“President Obama was peddling political snake oil to our fellow black Americans,” he added. “For the past eight years, Mr. Obama has not done much of anything to improve the lot of black Americans. Arguably, things have gotten worse for black Americans during this president’s tenure.” (RELATED: Ted Nugent Just Dropped A Truth Bomb On Gun Control Advocates Everywhere)

“Black unemployment is double that of whites,” he continued. “For younger black Americans that means an unemployment rate of near or above 20%. In the March 24 issue of National Review, even ultra-liberal black broadcaster Tavis Smiley told HuffPost Live’s Alyona Minkovski, ‘Sadly — and it pains me to say this — over the last decade, black folk, in the era of Obama, have lost ground in every major economic category.'”

“Black Americans would be wise to reject the destructive liberal policies and politicians who have devastated their communities and their families,” he wrote. “Let’s make America great again for all Americans. Vote Trump for president.”

On Saturday night, Obama spoke to the Congressional Black Caucus Foundation and said it would be an “insult to his legacy” if the African-American community failed to get out and vote.

“There’s no such thing as a vote that doesn’t matter,” Obama said. “It all matters.  And after we have achieved historic turnout in 2008 and 2012, especially in the African-American community, I will consider it a personal insult, an insult to my legacy, if this community lets down its guard and fails to activate itself in this election.”

“You want to give me a good sendoff,” he continued. “Go vote. And I’m going to be working as hard as I can these next seven weeks to make sure folks do.”