Donald Trump campaign ads are appearing next to Islamic extremist propaganda on YouTube, and the campaign has made no visible effort to correct the issue, although The Daily Caller News Foundation has called attention to the discrepancy in multiple email conversations.

What’s more, the placement of Trump ads on these videos indicates Google is sharing a cut of the revenue with the creators of these accounts in accordance with YouTube’s partner program, meaning Trump campaign funds may be inadvertently lining the pockets of Islamic extremists.

ISIS homegrown terror relies heavily on internet-disseminated propaganda, and countless experts have noted that homegrown attacks are in fact inspired by these propaganda campaigns. The suspected New York City bomber, the Boston bombers, the San Bernardino gunmen and the Orlando shooter all viewed radical Islamic terror propaganda online before carrying out their attacks.

The Trump ads attach to videos that span the jihadi gamut, from Islamic chants to outright calls to action.

In the following ad, Trump holds his hand over his heart in front of an American flag background next to a YouTube video on the channel, “Where ever you find a kafir [non-Muslim] you kill them.” 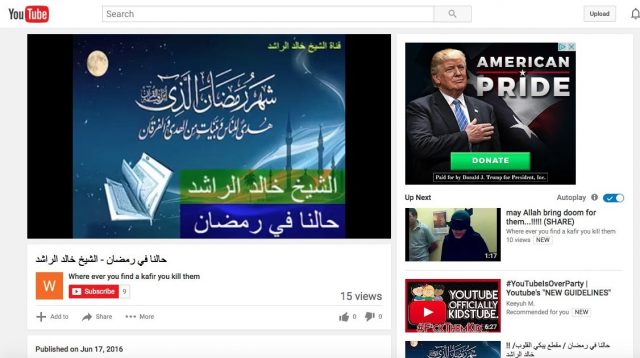 Screenshot of Trump ad running alongside a video on the channel “Where ever you find a kafir you kill them” taken by GIPEC researchers in New York, NY. (Screenshot/YouTube/GIPEC)

The screenshot is one of many provided to TheDCNF by researchers who monitor online activity of shadowy groups at the Global Intellectual Property Enforcement Center (GIPEC). Another pair of screenshots show a Trump ad running before a video featuring an Islamic State flag. It’s a Turkish translation of an anthem to ISIS released by the group’s propaganda arm Ajnad Media in 2013, according to Aymenn Jawad al-Tamimi, a fellow at the Middle East Forum. 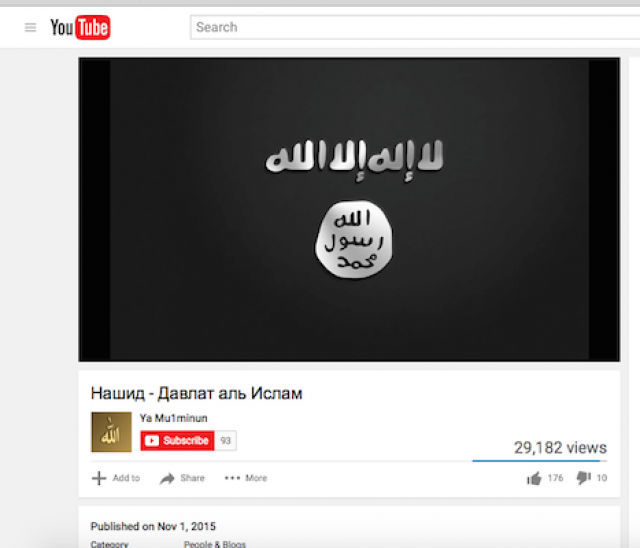 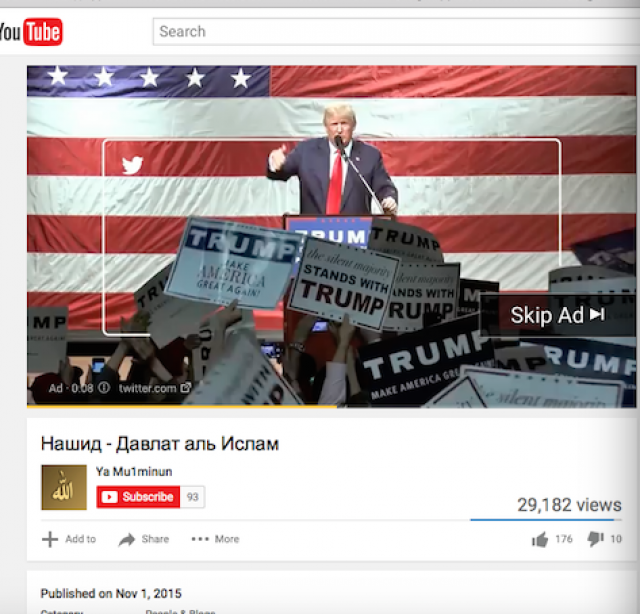 The original song has played hundreds of thousands of times on YouTube, and has become so popular it functions as a quasi-national anthem for ISIS, according to the Middle East Media Research Institute. It’s the song “most strongly identified with the Islamic State,” MEMRI research fellow M. Shemesh writes in a piece explaining how ISIS uses “nasheeds,” or Islamic hymns, to reinforce its message and recruit jihadis.

The Trump campaign, however, was largely cavalier about the issue in several emails with TheDCNF. A spokesman told TheDCNF the campaign had provided guidelines that should have precluded any such juxtapositions, then asserted that the campaign “is always” in contact with Google.

The Trump spokesman could not give any specific examples of action taken to address the ad placements, and signaled no clear intent to re-approach Google in light of the revelation. This, despite Islamist propagandists possibly earning money his constituents are donating to his campaign.

“Aspire to greatness,” blares a Trump ad, placed alongside another Turkish translation of an ISIS nasheed released by Ajnad Media called Nahadna Nahadna (‘We have risen, We have risen’). Al-Tamimi translates: “We have slaughtered the soldiers, we have filled the land / We were the fuel, so be the spectators.” 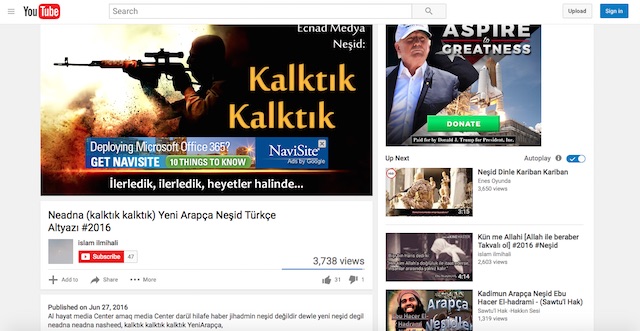 Screenshot of Trump ad running alongside the Turkish translation of the nasheed Nahadna Nahadna, taken by GIPEC researchers in New York, NY. (Screenshot/YouTube/GIPEC)

In another ad, Trump grins and gives a double thumbs up next to a YouTube video titled “Nasheed jihad” featuring a photo of masked Muslim gunmen surrounding a white man in an orange jumpsuit. 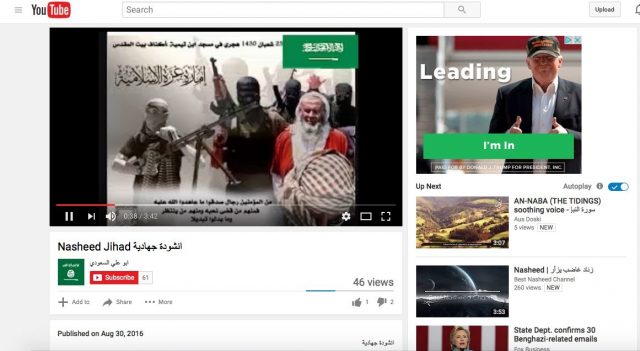 “Trump owes it to his campaign contributors and his country to not allow this to happen,” attorney Keith Altman, who is representing the family of an American student killed in the Paris terror attack, told TheDCNF. The family is suing Twitter, Facebook and Google for providing “material support” to ISIS by knowingly allowing the group to use their platforms.

Trump stands in front of an American flag with his hand over his heart in another ad found by GIPEC researchers that is emblazoned with the words “AMERICAN PRIDE.” The ad is placed next to a propaganda video showing fake footage of U.S. soldiers torturing prisoners at Guantanamo Bay prison. 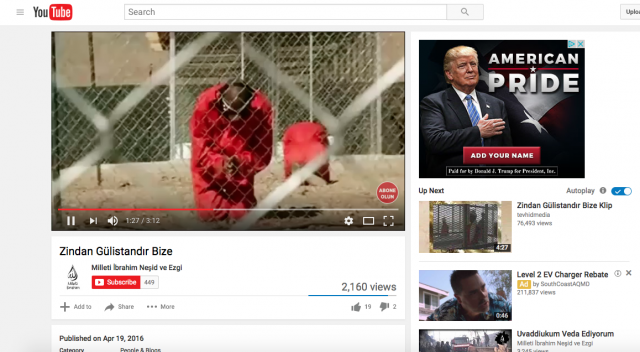 The owners of these propaganda accounts have apparently given YouTube permission to place the ads with their videos in exchange for a share of the profits via a Google account, the researchers found. The YouTube partner program guidelines say each video must be approved for monetization to enable advertising, so that the “partner” can receive a portion of the profits.

YouTube exercises its right to de-monetize videos that don’t meet its advertising standards, but does rely — perhaps in large part — on users to flag the videos. YouTube users such as Philip DeFranco have complained of ads being dinged from their videos because of profanity, explicit content or no apparent reason at all. DeFranco, who has more than 4 million followers, has accused YouTube of “censoring” channels by removing the ads and, therefore, the revenue content creators need to continue producing videos.

Google has not provided numbers or specific information regarding its revenue in such cases, so it’s unclear how much the owners of the videos with Trump ads might be profiting. Digital Citizens Alliance tried to get answers from Google when it released a report on these partnerships in March, but the group’s deputy executive director Adam Benson told TheDCNF they never heard from either YouTube or Google.

According to estimates by SocialBlade, a website that tracks ad revenue on various social media platforms, these specific videos could bring in anywhere from $0 to $100 or more, depending largely on the number of views they get. Of course, $10 here and $100 there could quickly add up depending on the number of Trump ads running on these sort of videos. The sheer number of propaganda accounts makes the amount of funds difficult to adequately quantify, which is perhaps part of extremists’ fundraising calculus.

“It is troubling to see candidates ads still showing up next to videos that appear supportive of terrorist groups,” Benson told TheDCNF. “It remains a mystery as to why Google would split ad revenues with people appearing to push murder and mayhem.”

Google and YouTube have put some protocols in place aimed at fixing these discrepancies, which not only threaten the organizations that pay for the ads, but also internet users who might see them as a sign that the site or video it’s paired with is legitimate. A GIPEC analyst told TheDCNF Google could be doing a lot more by investing significant sums into systems and software that monitor and detect extremist content as they are posted.

“These companies that have multi-billion dollar valuations are relying on free labor of their members to notify them of these horrific videos and posts,” the analyst said.

YouTube asked for links to the videos in question when TheDCNF reached out for comment, but did not otherwise respond, except to issue a statement that’s long been circulating.

“YouTube has clear policies that outline what content is acceptable to post, and we prohibit content related to dangerous or illegal activities and terrorism,” the statement reads. “YouTube’s teams review videos that are flagged around the clock, and work quickly to remove material that violates our policies. We also have stringent advertising guidelines, and work to prevent ads appearing against any video, channel or page once we determine that the content is not appropriate for our advertising partners.”

Google and YouTube seem content to allow these mistakes to continue happening rather than take meaningful action to stop the discrepancies.

“I’m not at all surprised, because I assume the vast majority of the ads are going where the campaigns want,” former Republican Rep. Pete Hoekstra, who chaired the House Intelligence Committee and is now a senior fellow at the Investigative Project on Terrorism, told TheDCNF.

The kinks will likely sort themselves out with time, he said, but campaigns probably aren’t willing to put up a fight in the near term because that would require resources, and would also divert attention to an aspect of internet campaigning some people clearly don’t like.

“Does any campaign have the resources or the capability or the incentive to try to get it exactly right, right now? And the answer is probably no,” he added. “It will take time to fix it and all that, and the return when you’ve got 11 weeks left [of the campaign] — you recognize there’s going to be some misses.”