In 1991, a guy named Rodney King was a victim of police brutality by the LAPD. On April 29, 1992, a jury acquitted the cops who beat him, and Los Angeles plunged into six days of rioting.

A few hours after the verdict was announced, the world watched as a truck driver named Reginald Denny was dragged from his truck at the intersection of Florence Ave. and Normandie Ave. in South Los Angeles, beaten unconscious, and left to bleed in the street:

Mr. Denny’s crime? Being a white guy driving through a black neighborhood, right after some white cops were acquitted of police brutality against a black guy. Denny was targeted for his race and beaten nearly to death.

A little while later, a stand-up comedian named Bill Hicks recorded the following routine about the Reginald Denny beating.

Now, Bill Hicks was nobody’s idea of a right-winger. He was fervently anti-war, anti-gun, pro-drug, pro-abortion, etc. He passed away not long after that was recorded, but if he were alive today, he’d probably be in the same category as Jon Stewart and Samantha Bee and John Oliver and the rest of them.

He just wasn’t an idiot.

I’m reminded of all this because of the “protests” (i.e. riots) in Charlotte last night. Because of stuff like this:

Protesters are burning stuff from the trucks now. This is all happening on I-85 @wsoctv pic.twitter.com/82fdCyfCkX

This family was traveling on I-85 when they say #CLT protesters who were throwing rocks at drivers shattered their windshield. @wsoctv pic.twitter.com/Lz3Z3nU7iC 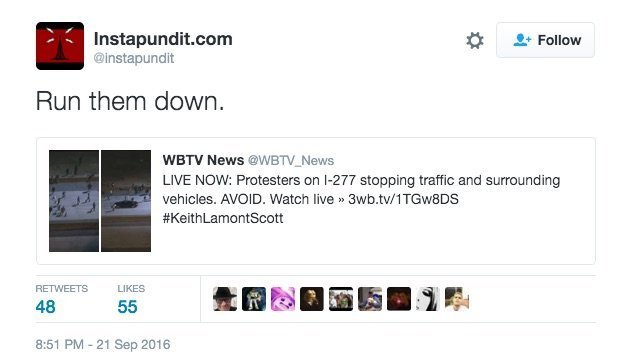 Glenn “Instapundit” Reynolds was briefly suspended from Twitter for that last one, and he was only reinstated after he agreed to delete it. Reynolds’ response:

“Sorry, blocking the interstate is dangerous, and trapping people in their cars and surrounding them is a threat. Driving on is self-preservation, especially when we’ve had mobs destroying property and injuring and killing people.”

But he’s only saying so because those rioters are black. Right? A black cop shot a black suspect in a city with a black police chief, in a country with a black president, and some black people are rioting and looting over it. So of course, it’s the fault of white dudes like Glenn Reynolds.

Reginald Denny survived that brutal beating almost 25 years ago, but his speech and ability to walk were permanently affected. He’ll never be the same. All because of the color of his skin. All because his attackers were angry about something he didn’t have a damn thing to do with.

But hey, at least he didn’t defend himself. Then people would’ve called him a racist.

What happened to Rodney King was wrong. But that doesn’t make what happened to Reginald Denny right. It doesn’t balance the scales. Hurting innocent people for the actions of other people who vaguely resemble them is wrong. It’s evil.

The names change, but the story’s still the same. And now, almost a quarter of a century later, it’s even worse. Now it’s considered racist to defend your own life against rioters, if they look like they could be Obama’s sons and daughters.

"Protesters." Who were in the middle of the highway, throwing rocks at cars and burning stuff and threatening people. Good work, @EdMazza. pic.twitter.com/yvBvIvSel9