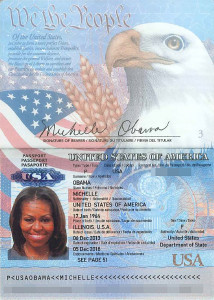 DC Leaks published a scan of the first lady’s passport that came from Ian Mellul’s email account Thursday. He is a White House staffer who purportedly does advance work for Hillary Clinton’s presidential campaign.

The hack also included detailed schedules for White House officials, including a trip Joe Biden recently made to Cleveland, along with Mellul’s correspondence with other staffers.

“We take any reports about a cyber breach seriously, particularly if it contains some sensitive information,” Josh Earnest said during a press conference. “Certainly, this is something we are taking a close look at.”

“The leaked files show the security level of our government,” the hacker said in an email to the New York Post. “If terrorists hack emails of White House Office staff and get such sensitive information we will see the fall of our country.”

“We hope you will tell the people about this criminal negligence of White House Office staffers.”