After years of searching by Congressional investigators, FBI agents and investigative journalists, the timeline of Hillary Clinton’s email scandal still contained gaps in which the buck could be passed. Paul Combetta, the IT tech from Platte River Networks, was Hillary Clinton’s fall-guy. The Clinton campaign said Mr. Combetta acted alone when he used BleachBit deletion software to permanently destroy 33,000 supposed yoga, recipe and marital communications on Hillary’s private email server, pursuant to a 60-day email retention policy. The data was so ruined that “even God” couldn’t read it.

Then came “Stonetear,” whose actions could become the modern-day equivalent of Watergate in this campaign. On September 16, 2016, Twitter user @GOPpollanalyst, who goes by the online name “Katica,” sent me this bombshell via direct message to my @RepStevenSmith congressional parody account: 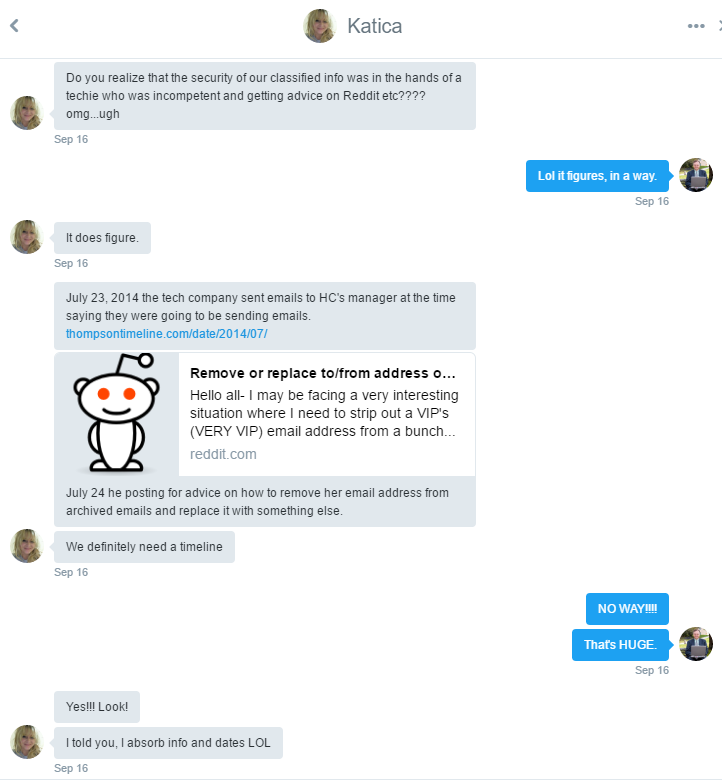 The July 24, 2014 Reddit post contained this request for advice about “stripping out” the email address of a “VERY VIP” email account, which was posted just one day after the July 23, 2014 agreement between the State Department and Congress to release Hillary Clinton’s emails:

Assuming that “Stonetear” was discussing Hillary Clinton’s emails, these finds appear to be the smoking gun in the Clinton email scandal. The posts prove intent to obstruct the production of evidence to Congress, either through deception or deletion, and that these events took place after the evidence was requested. There is no legitimate reason for anyone to act this way if the emails merely contained information about yoga poses and wedding invitations.

But is “Stonetear” really Paul Combetta? Katica found a number of data points to strongly suggest they are one and the same:

Considering all of this together, either Paul Combetta is “Stonetear” or he has a lookalike who works in IT, goes by the same username and lives in Rhode Island, which is extremely unlikely. While the social media posts linking “Stonetear” and Combetta were already convincing, the “Stonetear” Reddit posts also fit perfectly into the Clinton email scandal timeline.

Based on the FBI report and Katica’s smoking gun discovery, it looks like the “shady sh*t” Combetta was involved in goes much deeper than just BleachBit:

On September 8, 2016, Congress discovered that Combetta was granted immunity by the Department of Justice in relation to information he provided to the FBI in its investigation into the Clinton email server. On September 13, 2016, Combetta appeared before a Congressional oversight committee and invoked the Fifth Amendment privilege against self-incrimination, refusing to testify. We don’t know the scope of the DOJ’s immunity order because neither the FBI nor the DOJ told Congress it even exists, and Combetta did not bring it with him to the September 13, 2016 hearing. However, if the immunity order applies to Congressional hearings and these facts, Combetta may be forced to testify in a future hearing.

After a lot of discussion about the potential fallout of this decision, Katica and I decided the “Stonetear” information had to be released.  Late Sunday night, we tweeted the (then-live) short link to the Reddit “VERY VIP” post and four screenshots to Katica’s 2,000 followers, followed by an immediate retweet of her post to my 16,000 followers.

The response was immediate. We stayed on the phone to monitor the uptick in retweets together, as well as to read and respond to the tech people who went onto Reddit and archived “Stonetear’s” posts (something neither of us non-techies even considered doing at the time). The Redditors also gave us input on the IT details contained in the Reddit posts and hunted down even more social media connections between “Stonetear” and Paul Combetta.

After a nearly sleepless night, the next morning we direct messaged and/or posted on as many threads of influential Twitter accountholders, reporters and members of Congress as possible. The story broke shortly afterwards on several conservative websites, such as Conservative Treehouse and the Daily Caller. “Stonetear” started deleting his Reddit posts within a few hours of the stories breaking, which was caught on video while it was happening and posted on YouTube.

[dcquiz] Later in the day, the story made it into US News and World Report, the first mainstream media outlet to cover the story, followed the next day by The Washington Post. By Tuesday, a congressional committee demanded Combetta submit to recorded interviews by this Friday or threatened to issue a subpoena.

All of this was caused by the amazing sleuthing of a student majoring in eDiscovery and litigation, then promoted by a Twitter parody account, then expanded upon and disseminated by an army of Reddit users. Nothing can be weirder than this election, but I hope this article proves that this revelation didn’t involve a “conspiracy” between Putin and Trump—it was simply the crowdsourced efforts of people who are sick and tired of Hillary Clinton’s corruption and cover-ups.