Michelle Obama gave “The Late Show with Stephen Colbert” the biggest ratings boost it has seen in a year.

Tuesday night, the first lady joined Colbert to talk about leaving the White House and the CBS show averaged a 2.8 ratings share in Nielsen’s overnight ratings,  according to the Hollywood Reporter.  (RELATED: Hillary Clinton’s ‘Tonight Show’ Appearance Gets Higher Ratings Than Donald Trump’s) 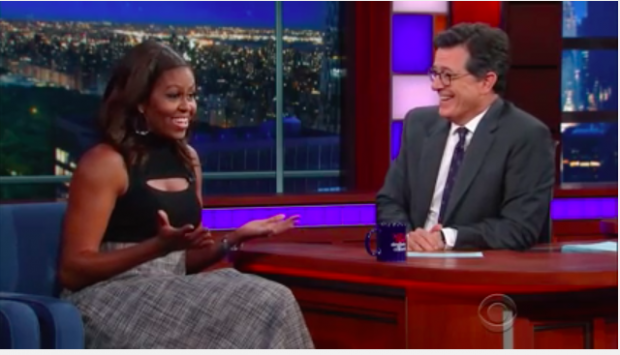 During Obama’s appearance, she said she had “no sympathy” for either Melania Trump or Bill Clinton because they are the ones that have to go there “and stand by the person running for president.” (RELATED: Michelle Obama: I Have No Sympathy For Melania Trump)

“If you don’t agree, you should’ve agreed before they ran,” Obama said. “If I didn’t agree with what Barack was saying, I would not support his run. So I stand there proudly, and I hope they are too.”

Obama also tried to do her best impression of Barack Obama when they are all sitting around the dinner table at the end of the day.

The first lady’s “Late Show” appearance tied the ratings for when Hillary Clinton showed up on NBC’s “The Tonight Show Starring Jimmy Fallon” the night before.