There were 15,696 murders and non-negligent manslaughters in the U.S. last year  — an increase of 1,532 over 2014 and more than any other year during the Obama presidency — newly released data shows.

The murder spike marked an increase in all categories of violent crime, according to the FBI’s Uniform Crime Report (UCR), which was released just after midnight Monday.

An estimated 1,197,704 violent crimes were committed in 2015, an increase of 3.9 percent from 2014. The number of murders increased 10.8 percent over the course of that year. Rapes increased in number by 6.3 percent, and aggravated assaults by 4.6 percent. 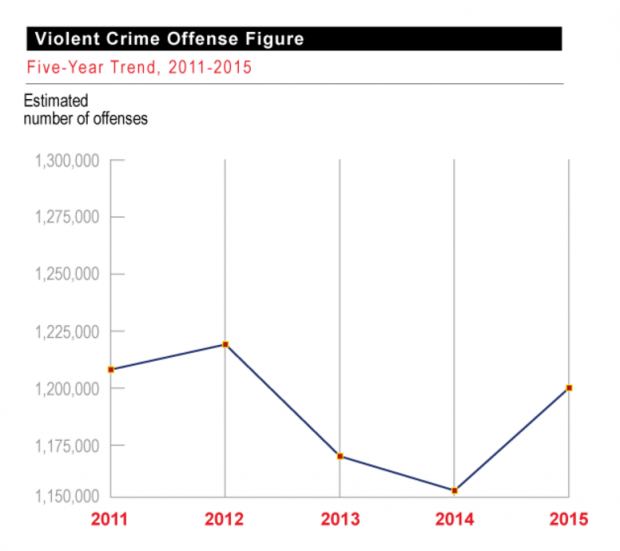 The release of the report comes hours ahead of a the first presidential debate between Hillary Clinton and Donald Trump.

The new data will likely play into the hands of the Republican real estate mogul, who has positioned himself as the law and order candidate by accusing President Obama and Democrats of being soft on both traditional domestic crime as well as on terrorism.

“I have a message for all of you,” Trump said at the Republican National Convention in July. “The crime and violence that today afflicts our nation will soon come to an end. Beginning on January 20th 2017, safety will be restored.”

Obama has pushed back against Trump’s allegations of weakness.

“This idea that America is somehow on the verge of collapse, this vision of violence and chaos everywhere, doesn’t really jibe with the experience of most people,” he said during a White House press conference in July.

“Although it is true that we’ve seen an uptick in murders and violent crime in some cities this year, the fact of the matter is that the murder rate today, the violence rate today is far lower than it was when Ronald Reagan was president and lower than when I took office,” he added.

The one bright side in the UCR is that property crimes like larceny and theft have decreased year-over-year.

But another negative is that clearance rates for violent crime cases also decreased in 2015.

Last year, 46 percent of all violent crimes, 61.5 percent of murders, 37.8 percent of rapes, and 54 percent of aggravated assaults were closed by arrest or “exceptional means,” according to the data.

Clearance rates were higher in all of those categories in 2014 when 47.4 percent of all violent crimes, 64.5 percent of murders, 38.5 percent of rapes and 56.3 percent of aggravated assaults were cleared.

As Democrats are keen to point out, despite the alarming rise in murders and rapes, violent crime levels across all categories have decreased drastically in the past several decades.