Syrian dictator Bashar al-Assad and his Russian allies have been using bunker buster-type bombs in an attempt to destroy the last remaining rebel-held hospitals in the besieged city of Aleppo, according to a humanitarian medical group.

Syrian and Russian forces are engaging in a particularly intense bombing campaign after a ceasefire brokered by Secretary of State John Kerry fell apart last Monday. At least 600 civilians have been killed, 44 of whom were children, while another 1600 were wounded, according a Union of Medical Care and Relief Organizations (UOSSM) press release provided to The Daily Caller News Foundation Monday.

The use of bunker buster munitions against hospitals and other civilian relief centers in Aleppo represents an attempt by Assad and his allies to bring a decisive end to the rebellion by simply killing off the population. Five years of internal warfare that included the use of deadly barrel bombs, is forcing the Syrian population to go underground, seeking shelter in fortified buildings and underground relief centers. Bunker buster munitions are custom designed to penetrate underground facilities, making the last refuge for the city’s tens of thousands of civilians effectively useless.

Assad has also targeted three out of four response centers run by Syrian Civil Defense. Commonly referred to as the “White Helmets,” the Syrian Civil Defense is one of the only response units on the ground in Syria helping rescue civilians trapped in rubble from the deadly air strikes. 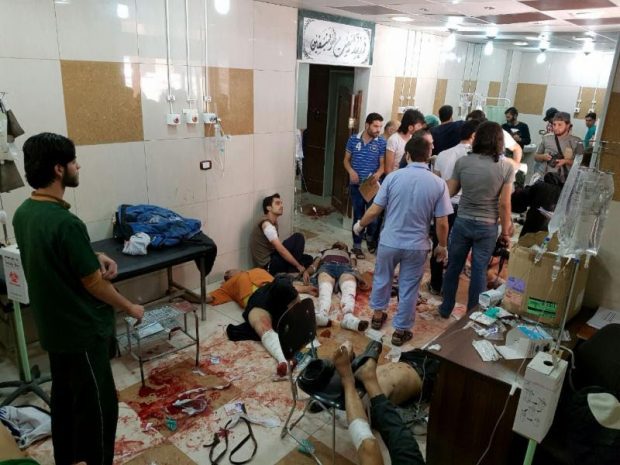 Patients in a Syrian hospital are treated on the floor due to a lack of space and increased air strikes from Bashar al-Assad’s forces. Source: Union of Medical Care and Relief Organizations

A lack of space, equipment and medicine requires Syrian aid workers to resort to desperate measures as the civilian casualty rate climbs. Some doctors have been forced to operate on bare hospital floors.

“What is happening now in Aleppo is nothing short of a human catastrophe, whatever area hospitals that are still operating are running on full capacity, we had two children that had to share a bed and ventilator because of how low our equipment and space is,” Dr. Bakri M., a medical aid worker told the UOSSM. “When you have surgeons operating on patients on the bare floor that is nothing short of a disaster.”