AFP volunteers and staffers knocked on doors and called voters across the state of Missouri Saturday and Sunday, earning a total of 713,367 voter contacts in the group’s push against Kander.

“When it comes down to defeating Jason Kander, it won’t be a matter of how many millions were spent on TV ads, it will be the personal connections our volunteers make with voters,” Missouri State Director Jeremy Cady told The Daily Caller News Foundation.

“That is the reason why so many of us are willing to spend our days on the phone or out in the sun hitting doors to ensure we make a difference this November.”

The group planned to hit the 500,000 voter contact mark by the end of the weekend, and quickly surpassed it’s goal due to an aggressive ground game.

The group sent out a mailer to an additional 700,000 targeted addresses that attempts to link President Barack Obama’s policies with Kander.  “Remember when you had money left at the end of the month? We can’t afford Jason Kander’s agenda,” the mailer read. 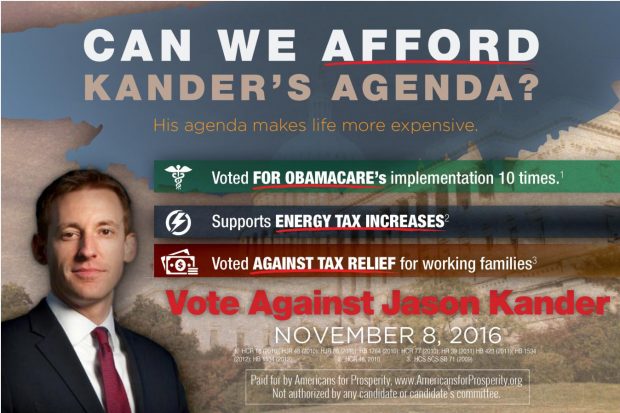 “In the past month alone our dedicated team of staff and volunteers have contacted over half a million voters either by phone or at the door to highlight how Kander’s agenda will cost Missouri families more,” Cady said in the official press release.

“Kander has proved he won’t listen to Missourians by voting ten times to protect Obamacare even after we overwhelmingly rejected it at the polls. Furthermore, his support for energy tax increases and his vote against tax cuts for lower and middle income workers proves he will only make it harder for Missourians to get by,” the press release stated.

Kander attacked Blunt for being a member of the “establishment,” and accused the Republican of being too close to lobbyists. Blunt held a seven-point lead in the first week of September, but the latest Emerson University poll revealed a two-point lead for Kander.