Katy Perry promised to use her “body” to “help change the world” and get Hillary Clinton elected.

On Monday, the 31-year-old singer posted on both Twitter and her Instagram account a naked photo of herself with certain body parts on the top and bottom being blurred out. The text with the photo read, “Katy Perry Tomorrow Votes Naked.” (RELATED: Can You Tell That Katy Perry Is Voting For Hillary Clinton?)

TOMORROW, I USE MY BODY AS CLICK BAIT TO HELP CHANGE THE WORLD pic.twitter.com/1a2GMm6PMi

The singer has been a very vocal advocate for the Democratic presidential nominee, performing at numerous rallies and fundraising events for Clinton. Earlier this year, Perry was even being spotted wearing a t-shirt that read, “Hillary Clinton is a bad-ass.” (RELATED: Katy Perry Just Made It Clear She Thinks Hillary Is Going To Be President) 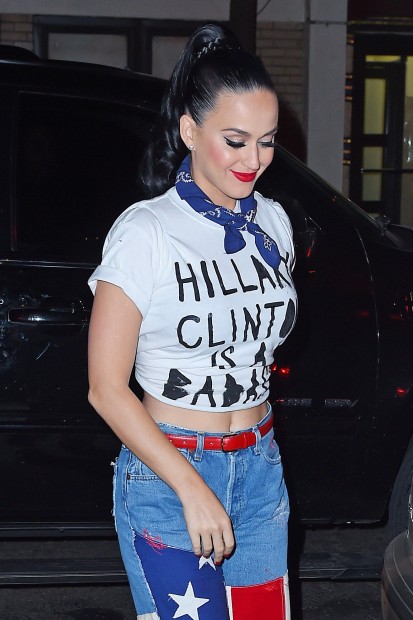 The singer also performed her hits “Rise” and “Roar” in July at the Democratic National Convention, where she pleaded with supporters to use their voice to get Clinton elected.

“You’ll have as much say as any billionaire,” she added. “Or you can just cancel out your weird cousin’s vote, if you like. It’s not where you come from; it’s what you grow into.”