“Trump’s problem is he’s a one-trick pony and in a 90 minute debate the trick runs very thin. …Trump was a gentleman’s D minus.”

“I, too, have the sniffles.” — The Daily Beast‘s Olivia Nuzzi, rating to Trump’s sniffles.

“Lester, you are going to need a gong.” — The Daily Beast‘s Jackie Kucinich.

Trump misses his own afterparty

“Trump skipping the after-party that was advertised as him attending, at moment when TV coverage of his performance is far from favorable.” — NYT‘s Maggie Haberman.

WaPo‘s Wesley Lowery: Lester Holt Was Not A Strong Moderator

“Factcheck: @BuzzFeedAndrew is not the MSM (but his reporting on Trump’s Iraq flip flop has been great).” — WL.

Journo Hate Mail: Wesley Lowery creates a cologne for himself

“I am dreading this debate. It will confirm just how terrible this whole fucking campaign has been. She can’t win. He can’t lose.” — Ana Marie Cox.

Um…except Cox may have to walk that back

“If Trump leaves a $100 on HRC’s podium tonight it’s bc he’s used to having to pay women to whip him like this.” — Ana Marie Cox.

A quick pre-debate question: “Do we think Donald Trump will again refer to his penis in a debate tonight? I put chances at 6 percent.” — Conor Friedersdorf, staff writer at The Atlantic.

Comedian and Trump foe Rosie O’Donnell gets a mention!

“This was the first-ever general election presidential debate Rosie O’Donnell was mentioned in.” — IJR‘s Hunter Schwarz.

“HE WILL NEVER BE PRESIDENT.” — Rosie O’Donnell, comedian and ex-host of ABC’s The View.

“Hillary Clinton won. That’s my take anyway. Trump needed something big, and instead he acted like himself.” — HuffPost Washington Bureau Chief Ryan Grim.

“The CNN panel is unanimous Trump was awful tonight. That makes me expect a Trump bump in the polls.” — Washington Examiner‘s Tim Carney.

“What did I just watch?” — Karen Attiah, The Washington Post.

“A bunch of men on CNN interrupting each other while debating whether Trump’s interrupting of Clinton was a problem is an amazing farce.” — Courtney Nguyen, senior writer, WTA Insider.

“The whole time that the camera was on him, he came across as rude and petulant. …I think everyone agrees that Trump was just awful.” — Democratic strategist and ardent Hillary Clinton supporter James Carville.

“Hillary: ‘I hope the fact checkers are turning up the volume’ DONE AND DONE AND DONE” — Neil Irwin, senior economic correspondent, NYT.

“God, every time Clinton has an attack line, it’s so telegraphed and so awful.” — David Rutz.

I enjoyed “House of Cards” but felt that its politicians were too bizarre to be plausible. I watch Trump and think: “Netflix, I apologize.” — Nicholas Kristof, NYT columnist.

“Anyone who would say Trump won this debate – We just had an entire segment on whether Donald Trump is a racist.” — Hari Savugan, former DNC national press secretary.

The situation inside the debate media filing center isn’t pretty

Covering the debate or Aleppo?

“World would be marginally better if there were more reporters covering Aleppo and fewer reporters at Hofstra.” — The Atlantic‘s Jeffrey Goldberg.

“Hofstra University’s wifi for thousands of journalists has been down for last 45 mins at #debates. A Hofstra hot mess.” — Philip  Rucker, national political correspondent, WaPo.

Politicos refuse to let their kids watch the debate

“The kids are all tucked in. Headed to sleep. Oblivious to the 90 minutes of discouragement our nation will soon endure.” — Rory Cooper, managing director, Purple Strategies.

“It saddens me to be putting my kids to bed early tonight because of the likelihood the debate won’t be family friendly. Bet I’m not alone.” — Justin Wolfers, college prof and NYT columnist. 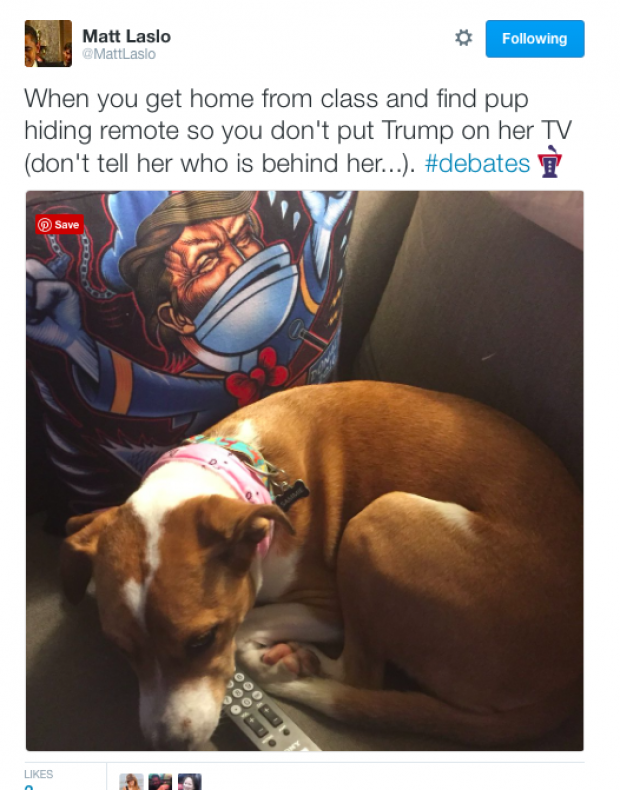 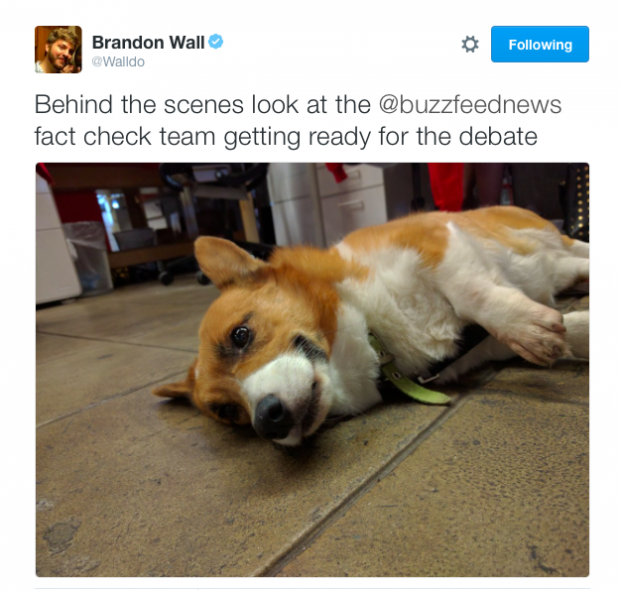 Debate Night Food In Newsrooms in D.C. and New York

Byron Tau is a reporter for WSJ. 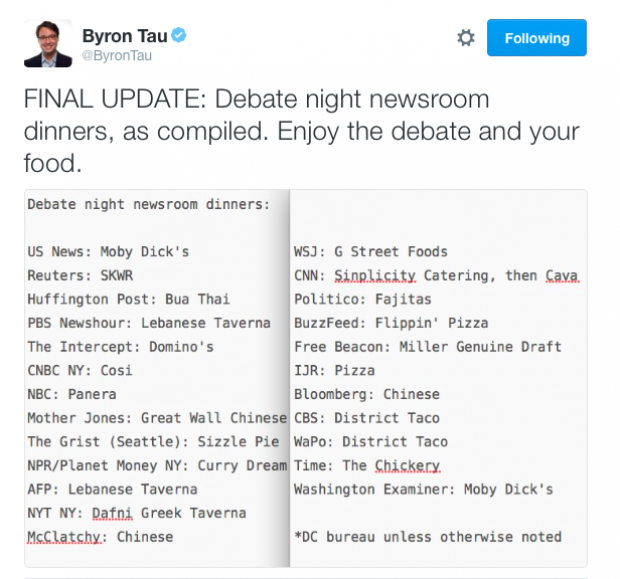