A conservative student at the University of Michigan has fairly brilliantly subverted a new campus-wide policy intended to force professors — and the entire campus community — to use exotic pronouns to refer to students who insist they belong to some alternate, fictional gender.

The student, Grant Strobl, has declared that he shall henceforth be referred to as “His Majesty, Grant Strobl.”

Strobl was able to announce his new pronoun because the taxpayer-funded school launched a new web page allowing students to declare their preferred, “designated” pronouns.

A Tuesday email from Martha E. Pollack, Michigan’s provost, and E. Royster Harper, the vice president for student life, links to the Wolverine Access student web portal, which students with a free-form box to fill in their pronouns of choice in a “new Gender Identity tab within the Campus Personal Information section.”

“The University of Michigan is committed to fostering an environment of inclusiveness,” the email from the two campus bigwigs explains. “Consistent with that value, the University has created a process for students to designate pronouns with the University and have those pronouns reflected on class rosters this fall.”

“A designated pronoun is a pronoun an individual chooses to identify with and expects others to use when referencing them (i.e., he, she, him, his, ze, etc.).”

Strobl described the email allowing students to designate their identities as “absolutely ridiculous” in an interview with The Daily Caller.

“Once professors print their rosters, they have the preferred pronouns of every student and are expected to use them,” Strobl said. “It could mean that professors could be disciplined for using pronouns incorrectly.”

[dcquiz] The chairman of the University of Michigan chapter of Young Americans for Freedom added that the pronoun “his majesty” is superior to oddly concocted pronouns such as, say, “ze.”

“I figured ‘his’ is an established pronoun and I entered ‘majesty’ — an honorific,” Strobl told TheDC. “Both words exist in the English language, unlike these invented pronouns.”

“It’s our jobs as conservatives to keep this country sane,” Strobl also noted, adding that he believes other students “are starting to change their pronouns” in ways school officials likely failed to anticipate.

“I encourage all U-M students to go onto Wolverine Access, and insert the identity of their dreams,” he told The College Fix.

Omar Mahmood, a 2016 University of Michigan graduate currently working at USA Today, suggested that he shall henceforth be called “Mr. Grand Mufti Sir” by his alma mater.

The email from the two high-ranking University of Michigan officials details that “Designated Pronouns will automatically populate on all class rosters accessed through Wolverine Access. Rosters pulled from other systems will not have designated pronouns listed. If a student does not designate a pronoun, none will be listed for them.” (RELATED: University Of Michigan Web Page Encourages Students To Change Their Pronouns)

“Asking about and correctly using someone’s designated pronoun is one of the most basic ways to show your respect for their identity and to cultivate an environment that respects all gender identities,” the email pontificates.

Students and professors who fail to use biologically wrong or completely made-up pronouns “can acknowledge that you made a mistake, and use the correct pronoun next time.”

The end of the email expresses gratitude to the “pronoun committee” which “worked the past year to formulate this process.”

The Gender Identity tab allows UM students to change their pronoun to whatever they wish at any time, opening up the possibility that a student could demand a new pronoun every single day. 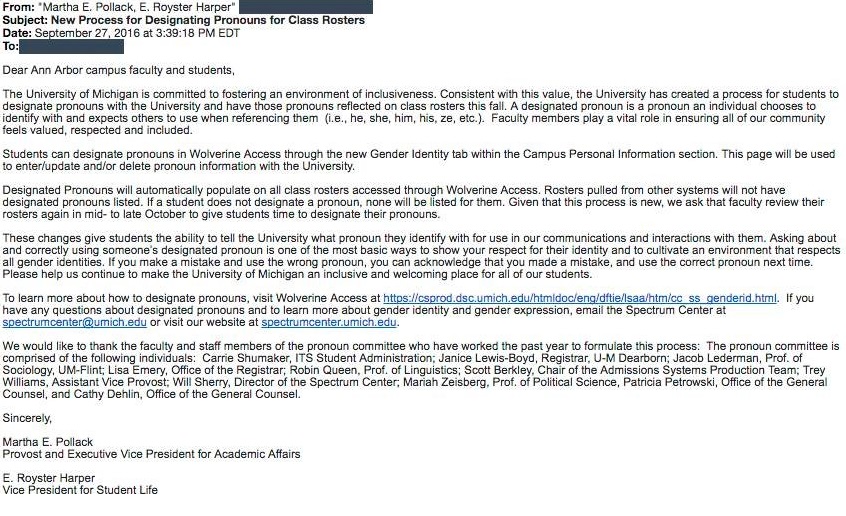 Guides on “proper prounoun usage” are all the rage on college campuses this academic year. Officials at schools around the country are pushing students to swap out pronouns such as he, she, him and his for gender neutral prounouns such as “ve,” “ver” and “vis.” There’s also the basic “they” as well as “thon,” “xe,” “faerself,” “hir,” “xyr” — and much else. (RELATED: Taxpayer-Funded University Instructs Students That Using The Wrong Pronouns Is ‘OPPRESSIVE’)

This fall, Vanderbilt University festooned its campus with professionally-designed posters which instruct students to use strange pronouns to refer to students and professors who refuse to admit they are either males or females. (RELATED: Overpriced Fancypants University Festoons Campus With Absurd ‘Ze, Zir, Zirs’ PRONOUN POSTERS)