Prior to West’s campus visit, a TCU student organization called Better Together planned a protest against the event. In an email sent out to group members, the Better Together leadership team accused West of having “a history of being outwardly hateful towards and prejudice against the Muslim community.”

The group leaders also stated that because they didn’t agree with some of West’s past statements, the members needed “to come together and show the true values of our community and how his speech against members of our community is intolerable.” 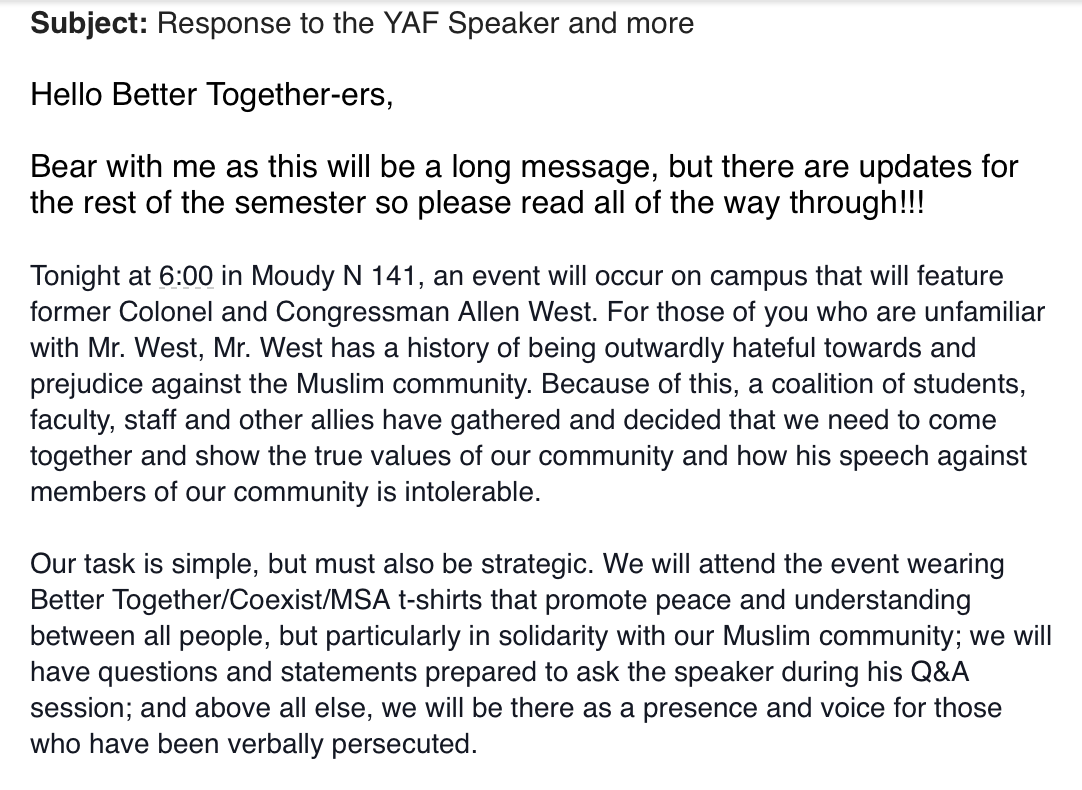 The event drew a crowd of more than 200 students, and according to Ashley Sherman, TCU YAF secretary at the time, once all seats were filled, students began sitting on the floor and in the doorway in order to hear West speak. Many members of the crowd were West supporters, but TCU 360, the university’s student newspaper, reported that more than 50 Better Together protesters were in attendance.

Sherman, challenging the student newspaper’s report, told The Daily Caller that “YAF registration staff estimated that closer to 20-30 students participated in the Better Together sit-in.”

West, who has always been openly opinionated when it comes to radical Islamic terrorism, stood firm in his convictions throughout his speech.

“I think Rep. Allen West did an excellent job differentiating between Islam and Radical Jihad. West laid out why Radical Islamic Terrorism is a great threat to this country and world and shouldn’t be ignored. That’s where I think Better Together protestors were mistaken. Allen West wants to let everyone know the truth of Radical Islamic Terrorism and how it should not be labeled as the same as Islam,” TCU College Republicans president Matt VanHyfte told TheDC.

A few months after the April 19 speech, TCU Magazine released its summer 2016 edition. A spread in the Alumna Matters section of the magazine titled “On Campus: activity and learning in all corners of the quad” summarized the West event and called his views “anti-Islamic.” 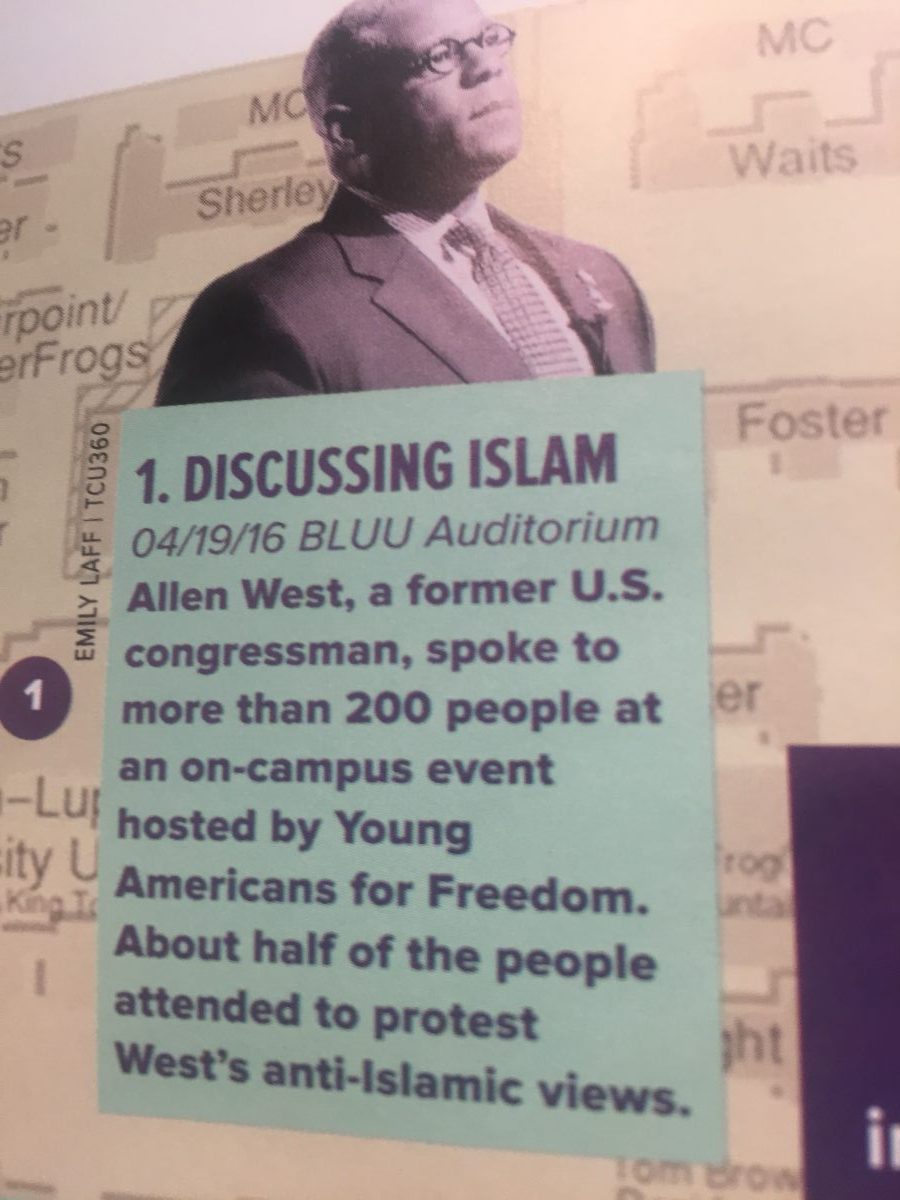 “It was incredibly disappointing to read the University’s blatant attempt at devaluing the tremendous success TCU YAF had in bringing Lt. Allen West to campus. The suggestion that half of those in attendance were participating in a protest, is a factually inaccurate attempt to take away from our chapter’s success, given the fact that the room was packed beyond full capacity with students, faculty, and members of the Fort Worth community, in the aisles and hallways to hear from and meet West,” Sherman explained.

“After witnessing the speech first hand, I find it disappointing that the university chose to emphasize the effort of the students who went out of their way to assassinate the character of Mr. West rather than the content of his insightful presentation,” said Lauren Dooley, a sophomore at TCU. “Despite what was reported by the school, Mr. West’s speech was anything but Islamaphobic.”

TCU isn’t the only college who has been less than welcoming to the decorated Lieutenant Colonel. According to YAF.org, prior to West’s speaking event at Saint Louis University this week, a campus administrator “claimed West, who is a veteran of both Operation Desert Storm and Operation Iraqi Freedom, does not ‘have experience with radical Islam.'”

The same administrator also informed the SLU students responsible for organizing the lecture that the words “radical Islam” could not be used on any advertisements for the event.

Despite the criticism West has received, students, supporters and Young Americas Foundation will continue to promote and spread his message. “YAF activists will not back down in the face of challenges from politically correct campus bureaucrats,” YAF’s website declares.

1
Adam Schiff Warns Trump After Roger Stone Sentencing: Pardoning Would Be 'Breathtaking Act Of Corruption'
Politics
2
Matt Gaetz Comes Out Swinging On 'The View,' Declares The 'Death Of The Political Left'
Politics
3
Trump Has A Positive Approval Rating For First Time Ever
Politics
4
Bernie Loses It When Bloomberg Calls Him The 'Best Known Socialist' Who 'Happens To Be A Millionaire With Three Houses'
Politics
5
Pete Buttigieg Has A Surprising Jeffrey Epstein Connection
Editorial