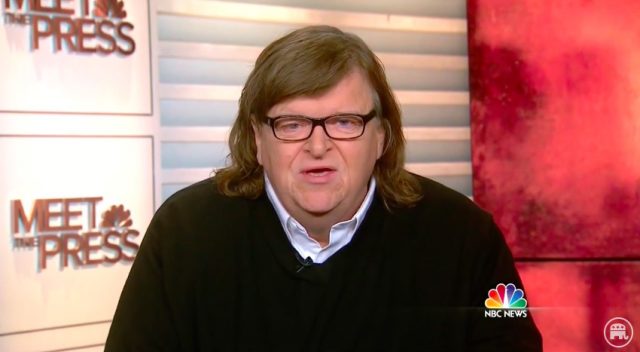 During an interview with Chuck Todd on NBC’s “Meet the Press” Sunday, the filmmaker said the establishment has abandoned voters and argued that they may vote for Donald Trump out of frustration.

“I mean, in my state of Michigan, Bernie Sanders won. If Hillary Clinton and the Democrats had a tough time with him, that should have been the red flag to everybody that there is a mood out there where people are upset at the Democrats and the Republicans.”

During his interview, Moore said Americans see Trump as a “human Molotov cocktail.”

“Across the Midwest, across the Rustbelt, I understand why a lot of people are angry,” he said. “And they see Donald Trump as their human Molotov cocktail that they get to go into the voting booth on Nov 8. and throw him into our political system.”

“I think they love the idea of blowing up the system.”

Moore, who clarified that he is not voting for Trump, said people don’t pay attention to the media or “people in power” any longer. (RELATED: Michael Moore Claims He Knows ‘For A Fact’ That Donald Trump Doesn’t Want To Be President)