Perhaps Damascus steel is better known as “pattern welded steel,” since it is formed by combining two different types of steel to create a certain functional quality. Forseti Knives considers making Damascus steel “a unique and highly sought after work of art.” The name comes from medieval times, when knives and swords forged with Damascus steel were marketed in the city of Damascus. Their value comes from both their usefulness and their unique designs. And right now they are on sale.

Here are ten Damascus steel knives from Forseti – and their detailed descriptions – that you can currently get for a discounted price: 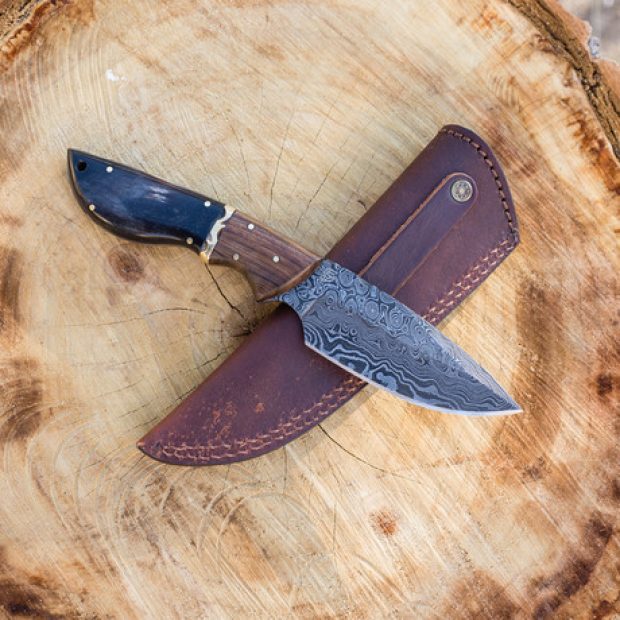 Normally $113, the Quanah Damascus knife is on sale for $87 (Photo via Touch of Modern)

Quanah Parker (1850-1911) was among the last of the free-ranging Comanche warriors who once terrorized the high plains. Parker ascended to the rank of war chief through brave acts in almost constant warfare with Anglos and other Indian nations. But Parker was more than a warrior, he founded the Peyote Religion, and was an influential political leader; negotiating peace with the US that spared his people the indignities heaped on other nations that fought back.

The combination of Rain drop Damascus and marble horn handle gives this Forseti Steel Comanche “Quanah” Damascus Knife a majestic look and solid hand. Whether worn on your belt during your next big game hunt or under glass as a show piece, this Damascus blade won’t disappoint! It even includes a full grain, hand stitched leather sheath for comfortable carrying.

Quanah Damascus Knife on sale for $86.99 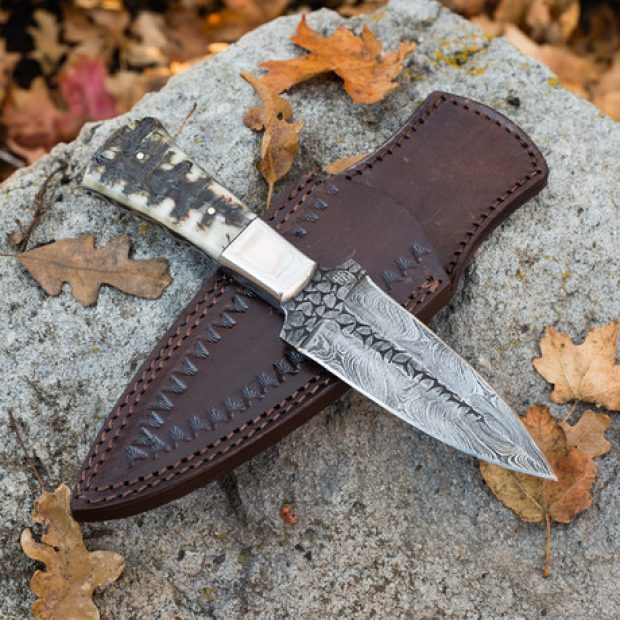 Normally $125, the Pugio Damascus dagger is on sale for $95 (Photo via Touch of Modern)

The Forseti Steel Pugio Damascus Dagger is a work of art in both form and function. The Damascus twist pattern and the inlayed Stag antler handle create a visually appealing harmony. As a tool, the extremely sharp double edge on this modified dagger and solid hand will make the most finicky blade connoisseur salivate. It even includes a full grain, hand stitched leather sheath for comfortable carrying.

Pugio Damascus Dagger on sale for $94.99 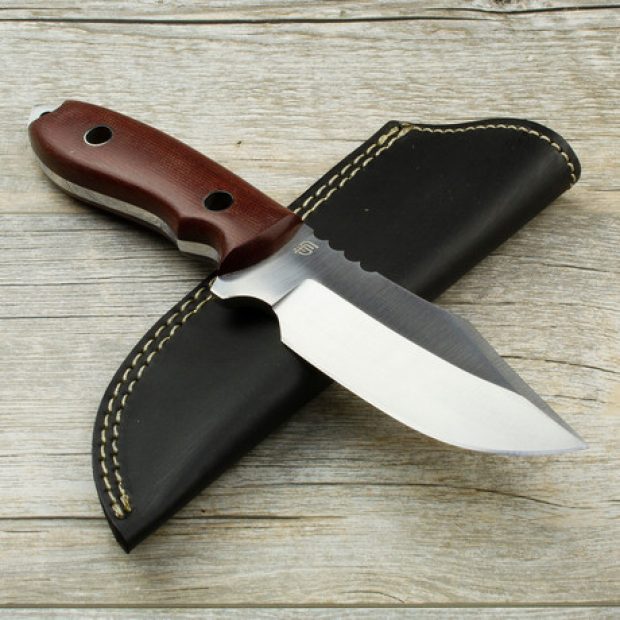 Normally $94, this tactical military and hunting knife is on sale for $72 (Photo via Touch of Modern)

Within the United States Special Operations community, an operator is a Delta Force member. These men are considered the “pointy end” of the military and are responsible for hostage rescue, counterterrorism, and direct action against high-value targets. Which is why the Operator’s Tactical Military and Hunting Knife is designed with a solid 5” blade made of 1095 steel, which will hold its edge and stand up to rough use. The classic shape of the blade and penetrating tip make this a very functional knife, and the full tang adds more weight to the knife, but gives you extra resistance.

The upgraded 4” Micarta handle gives you ample room for holding onto the knife. Plus, with multiple finger grooves you have the option to hold the knife in different ways. You can keep your hand completely on the handle, or you wrap your forefinger around the front finger groove to give you total control over the blade. Slotted ridges on the spine ensure your thumb doesn’t slide on the blade and gives more leverage when slicing.

Operator’s Tactical Military And Hunting Knife on sale for $71.99 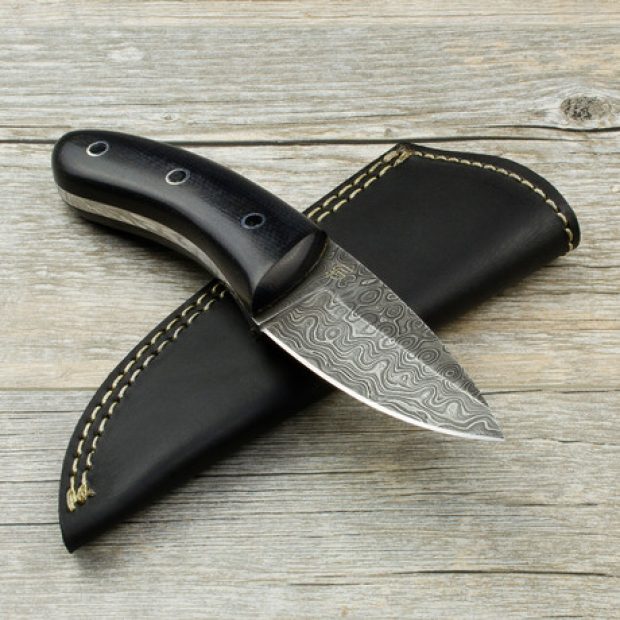 Normally $106, this EDC Damascus knife is on sale for $80 (Photo via Touch of Modern)

The Stealth EDC Handmade Damascus Steel Knife is the perfect knife for personal protection as well a great knife for skinning. The razor-sharp Damascus steel blade will hold up to the abuse of skinning an animal and won’t chip or get damaged when hitting bone. The Damascus steel is easier to sharpen than many other tooling steels and will give you a lifetime of enjoyment. 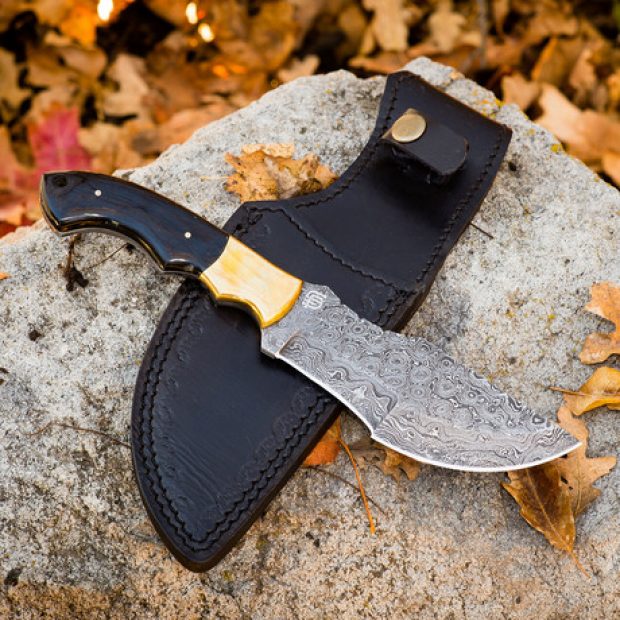 Normally $157, the Spetznaz Damascus tracker is on sale for $117 (Photo via Touch of Modern)

Known for their toughness and versatility in battle it only seemed fitting to name this robust blade after the Russian Spetsnaz. It features a curved drop-point blade and an offset “saw”. The buffalo marble horn handle with brass bolsters and raindrop Damascus steel pattern, creates a beautiful one-of-a-kind knife.

Spetsnaz Damascus Tracker on sale for $116.99 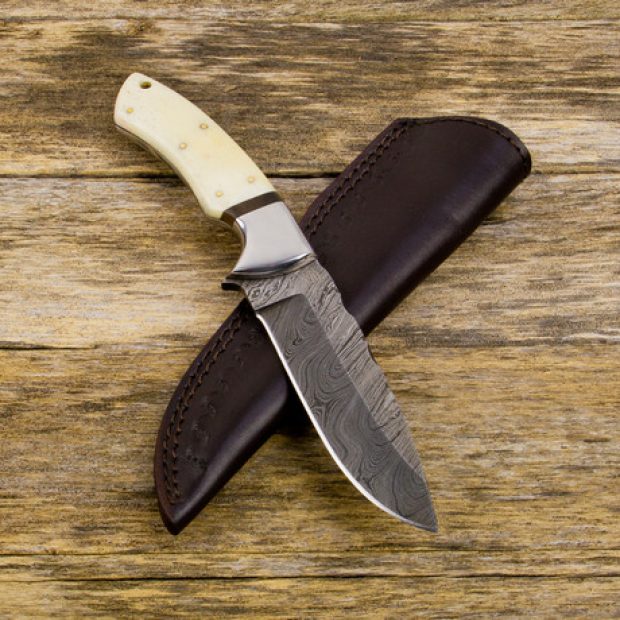 Normally $121, the Sir Edmund Damascus knife is on sale for $90 (Photo via Touch of Modern)

The Sir Edmund Damascus Knife is designed to meet the rigors of camp. This bushcrafter knife is made from 4mm blade stock and is therefore heavier and stronger than most knives. It retains the full tang construction of the rest of the Forseti Steel knives with a longer handle that is made to suit larger hands. The drop point blade and razor sharp Damascus twist blade make this an ideal knife for field use but is not over-sized for carving projects. It even includes a full grain, hand stitched leather sheath for comfortable carrying. 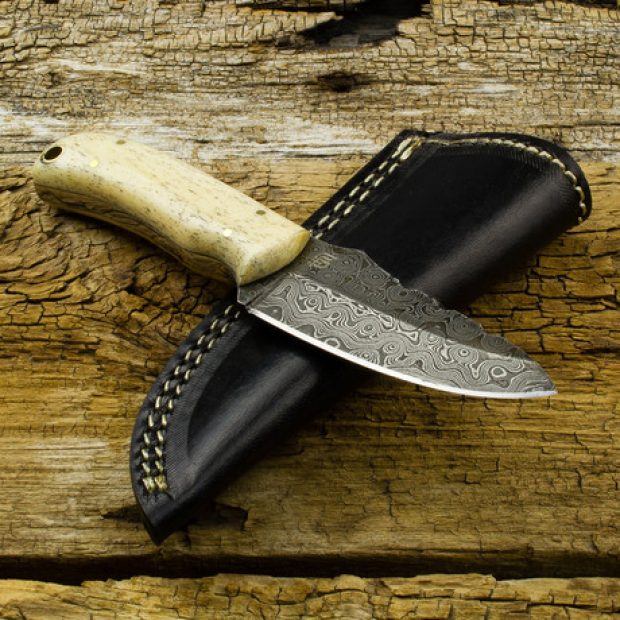 Normally $94, the Laplander Damascus knife is on sale for $72 (Photo via Touch of Modern)

Because of their nomadic lifestyle, fishing, trapping, and herding, the Laplanders needed a great, general purpose skinning knife. Compact enough that it is easy to use and versatile enough that it could be used for many different tasks, this knife is perfect for any hunter or herdsman. Many large skinning knives feel great in your hand, but they are unwieldy and impractical to use in real life situations. The 3” razor sharp blade on this knife is perfect for skinning, and the upturn of the spine allows your hand and thumb to keep a strong hold on the knife.

Laplander Damascus knife on sale for $71.99 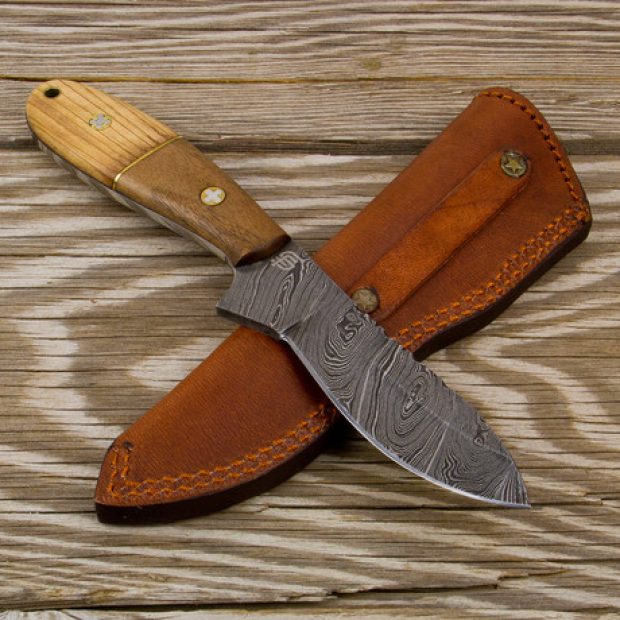 Normally $94, the Taksin Damascus skinner is on sale for $72 (Photo via Touch of Modern)

Taksin the Great was the King of the Thonburi Kingdom. He was raised in the ways of Thai nobleman and became a mighty military leader. Taskin lead an army to liberate Siam from its Burmese captors. After establishing peace in Siam he fought and drove back Burmese invasions throughout the northern Thai Kingdom. He returned to find that various warlords had overthrown Siam. He forcefully took back and liberated Siam a second time.

This Taksin Damascus Knife is designed to reflect his swift and demanding rule in the Thonburi Kingdom. This sleek skinning blade is complimented by the rich contrasting colors of an inlaid walnut and olive handle. Whether hunting, skinning or admiring the beauty of the Taksin, this truly is a knife fit for a noble King.

Taksin Damascus Skinner on sale for $71.99 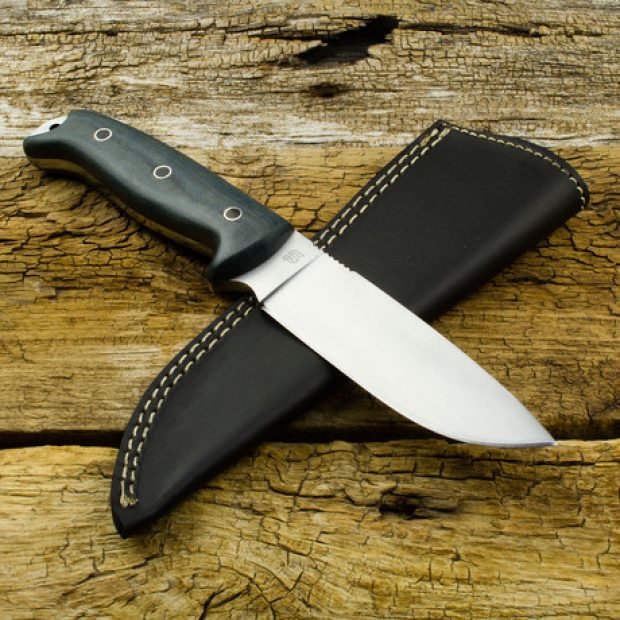 Normally $94, the Legionnaire tactical survival knife is on sale for $72 (Photo via Touch of Modern)

The Legionnaire Handmade Tactical Survival Knife is named after the unique military group and the men that make it up. The clean, classic lines of the knife make it practical for everyday use, and the robust 5” blade made of hardened 1095 steel will stand up to any punishment you can dish out. The full tang of this 9.5” knife gives it a comforting heft and solid feel. A quality Micarta handle will fit nicely into your hand, and the centered balance ensures functional use and gives you a great deal of confidence when using the knife. 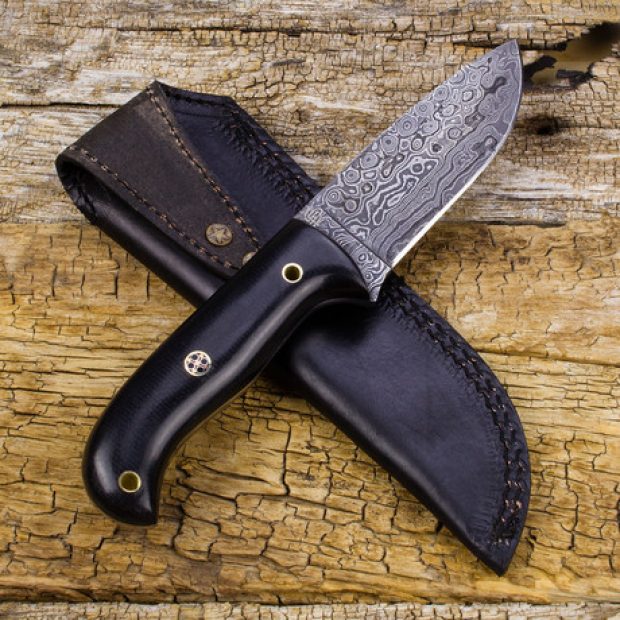 Normally $125, the Holman Damascus hunter is on sale for $95 (Photo via Touch of Modern)

Known as the “Blind Traveller”, James Holman was a British adventurer, explorer, and writer. Completely blind and suffering from debilitating pain and limited mobility, he launched a series of solo journeys that were unprecedented in scope and ability. In 1866, the journalist William Jerdan wrote that “From Marco Polo to Mungo Park, no three of the most famous travelers, grouped together, would exceed the extent and variety of countries traversed by our blind countryman.” In 1832, Holman became the first blind person to circumnavigate the globe. He continued travelling, and by October 1846 had visited every inhabited continent.

Few of us can imagine what it is like to be blind, let alone traveling the world as a blind person. The style of this handmade Damascus steel Holman Damascus Knife is suited to an adventurer and traveler. Built of 256 folded layers on hardened Damascus steel and with a dark Micarta handle the knife feels amazing to hold and has the heft you would expect from a handcrafted Damascus steel hunting knife.

Holman Damascus Hunter on sale for $94.99

Forseti sure makes great knives, and there’s no denying how cool they look. I’d probably get (at least) one of these knives anyway, but now that they are on sale, it is a no-brainer.

Damascus steel knives from Forseti are on sale (Photo via Forseti)