Mike Pence won the vice presidential debate — or at least that’s what you’d think if you were reading Twitter Tuesday night. 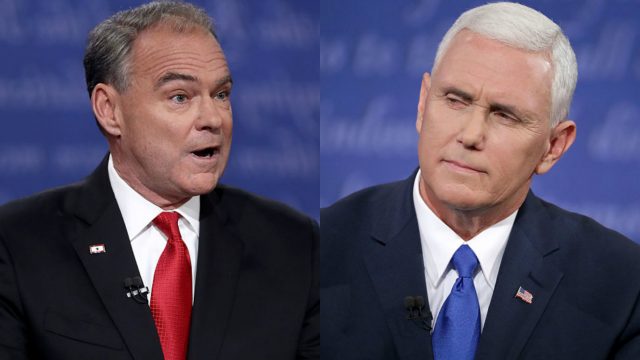 After Pence and Tim Kaine went head to head for 90 minutes on stage in Farmville, Va., it was clear that Donald Trump’s running mate had won the crowd over — while many complained that Kaine interrupted his opponent entirely too much. (RELATED: Everyone Is Talking About Tim Kaine’s Bizarre Behavior During The VP Debate)

Ok is there any doubts who won this DEBATE! The respectful Mike PENCE or The VERY DISRESPECTFUL TIM KAINE!

Mike Pence definitely won the #VPDebate hands down! Kaine is programmed and fake. Trump/Pence for the landslide win!

@realDonaldTrump @mike_pence what an honorable man who is a solid leader. Pence has won this debate.

#cbsnews Governor Mike Pence won this debate in a landslide. Kaine comes across as a buffoon.

Mike Pence won the debate before it even got started

Mike Pence won this debate…. good thing nobody cares about the VP….

#MikePence He is killing it in debate. He won hands down

Mike Pence just won the entire debate with that devastating attack on the Clinton Foundation. #VPDebate

Well if you vote based on VP debate @realDonaldTrump wins! @mike_pence has dominated this debate.

Let’s hold the election right after this debate.#Trump wins in a landslide.

Mike Pence is killing this debate. If Trump wins, I’m chalking a lot of it up to him.