In what won’t likely appease anyone who was offended by Jesse Watters‘ Chinatown edition this week on FNC’s Bill O’Reilly program, Watters has issued a quasi non-apology.

But really, he came so close to saying he was sorry.

The Mirror covered the many journalists — some of them of Asian descent — at predominately liberal news outlets who took offense to Watters’ video. CNN, for example, which isn’t entirely liberal leaning, couldn’t fathom why Fox News wasn’t agreeing that his video was the most offensive, most racist piece of journalism its media reporters had never seen. 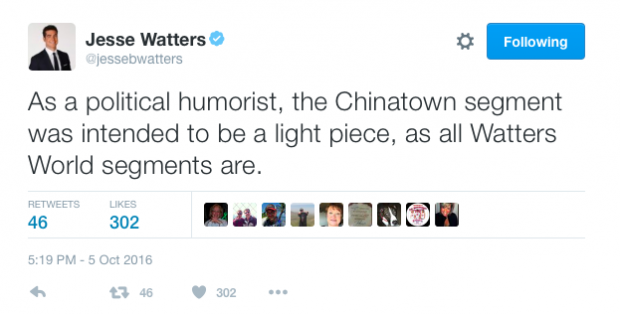 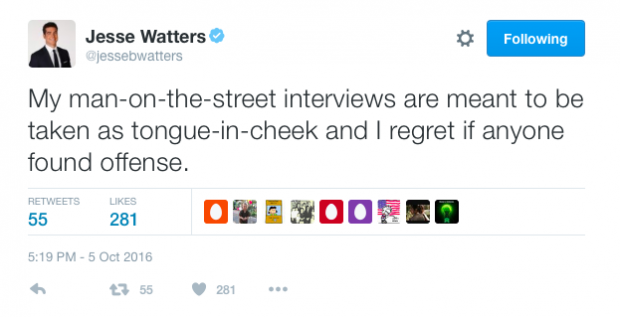 Brian Stelter, CNN host of “Reliable Sources,” wanted everyone to understand that people “DID” find Watters’ video offensive — as in several reporters in Washington and New York.

“Watters is expressing ‘regret if anyone found offense,'” the ass kisser wrote on Twitter, adding, “Many DID find this offensive.”

And of course, Media Matters‘ Matthew Gertz assessed Watters as a human being.

“Jesse Watters is a bad person,” Gertz wrote on Twitter.

He wrote, “Jesse Watters is a 38-year-old man who earnestly used the term ‘man card.'”

Carlos Maza, a research fellow at Media Matters, declared, “Lots of Fox News shows mock marginalized groups, but Jesse Watters gets a truly disturbing amount of joy out of it.”

But none of these Media Matters employees (present and past) would be outdone by the aptly named Jarett Wieselman of BuzzFeed (yes, I’m making fun of him that his name contains a word that sounds like “weasel”):

“In this year of cruel xenophobia, this venom from @jessebwatters is far and away the most heartless thing I have seen,” he wrote with an incredible dramatic flare.

He wrote, “In Jesse Watters’s defense, he has also made a racist video making fun of Italians.”