Federal agencies have spent an average of roughly $1 billion a year on advertising and public relations contracts, according to a report released by the Government Accountability Office Wednesday.

The report noted spending is highly concentrated within a few agencies, with the Department of Defense being responsible for over 60 percent of total contract obligations.

In addition to the $1 billion spent on contracts, another $430 million has been allocated toward nearly 5,000 federal public relations employees’ salaries on average, with public relations officers making a median of $90,000 in 2014. 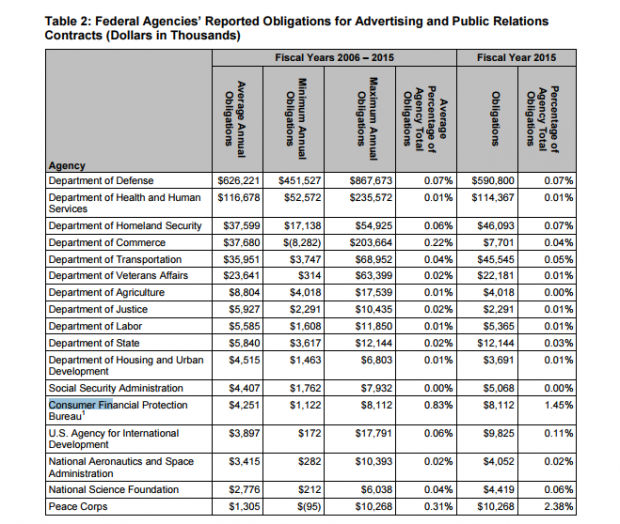 “With the increased popularity and accessibility of expanded media platforms, the federal government’s ability to publicize information has changed rapidly, but the total scope of federal public relations activities is largely unknown,” the finding say.

The Consumer Financial Protection Bureau, a watchdog agency created under the Obama administration, spent the largest percentage of its budget toward advertising in comparison with other agencies.

A number of agencies vastly increased their budgets toward the cause, with Veterans Affairs upping its number of PR jobs from 144 to 286 over the course of a decade.

“With increasing pressures on limited federal resources, it is crucial to know how much is spent across the federal government on public relations activities and which federal agencies are spending the most,” Senate Budget Committee Chairman Mike Enzi said in a statement. “It is important to understand the primary purposes and reported benefits from the investments of tax dollars paid by America’s hardworking families. I look forward to GAO continuing its efforts to shine more light on these activities.”

1
Here's How This Pro-Beijing Outlet Made It Into The White House Coronavirus Press Briefing
US
2
'That Is A Lie!' Joe Scarborough Goes On Screaming Rant At Networks – Including His Own – For Not Fact-Checking Trump During Live Press Briefings
Media
3
'Give Me The Price': Trump Ignores Journalist For Not Knowing Oil Costs
US
4
Bernie Sanders: Trump Isn’t To Blame For Coronavirus
Politics
5
WATCH: ABC’s Jon Karl Salutes Fauci — Fauci Fires Back With Finger Guns
Politics