Fox News anchor Sean Hannity, a rabid Donald Trump supporter, shot out a tweet at colleague Megyn Kelly Wednesday night after she blasted him on her TV program. Apparently, according to news reports, they’ve always been “cordial.”

Translation: They hate each other.

But depending on which site you read, one is sane and the other is crazy or in the tank for Hillary Clinton.

Breitbart News, an extension of the Trump campaign at this point with ex-Breitbart executive chairman Stephen Bannon employed as Trump’s campaign CEO, played the whole thing against Kelly. 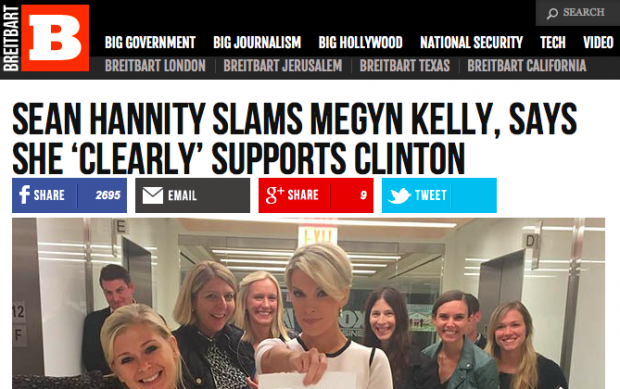 In the article, which is ostensibly a relatively straight news piece by Ben Kew, the headline above gives a huge shout-out to Hannity’s belief that Kelly “clearly supports Hillary Clinton.”

On her show, Kelly remarked, “Donald Trump, with all due respect to my friend at 10, will go on Hannity, and pretty much only Hannity, and will not venture out to the unsafe spaces these days, which doesn’t exactly expand the tent.”

Breitbart News slanted the story in Hannity’s favor and did not report what Kelly had said. Kew wrote that when a Twitter user said Hannity “should learn to stand by his colleagues” he replied, “Sure. When they stand by me.”

Stelter and Hannity have sparred for months now, with Hannity calling Stelter a pipsqueak after Stelter called Hannity out for exaggerating Clinton’s health issues and reporting conspiracy theories. (This was — oops! — before she got pneumonia.)

“Megyn Kelly was right,” Stelter wrote in his late-night newsletter, later calling her a “a take-no-prisoners journalist.”

Still, Stelter’s story about Kelly and Hannity was relatively free of nasty barbs against Hannity.

The funny part came when Stelter wrote Hannity for comment: “When I asked Hannity to elaborate on his tweet to Kelly, he replied with a blank email.”

Salon, a liberal site that once employed Joan Walsh (who crazily thinks Tim Kaine won the VP debate), made the Hannity-Kelly fight its LEAD STORY Thursday. The story basically contains no new information — they just highlight the whole thing as “Fox News Fight Night” and the feud as a “civil war.”

Shouldn’t a lead story of a publication at least contain some new info?

The author, Brendan Gauthier, described Hannity’s tweet about standing by his colleagues when they “stand by me” as “catty.”

BuzzFeed didn’t cover the strife between Hannity and Kelly at all.

HuffPost has Hannity “freaking out” after Kelly mocks him.

The rest of the story tips in Kelly’s favor and makes her sound fair and balanced.

Media Matters, a de facto arm of the Hillary Clinton campaign, covered the Hannity-Kelly tiff along with a few other stories saying Trump does Hannity to “avoid risk.”

“Reporter” Tyler Cherry wrote, “Trump’s insistence on staying in the Hannity cocoon is no surprise, given that Hannity has been one of his biggest cheerleaders throughout the election, using his prime-time show to openly shill for Trump and advance his lies.”

“Of course, Kelly could have vented to her friends on Twitter DM or email, but she chose to go after her colleague on the air for not challenging Trump enough in interviews instead. And Hannity could have run to management and cried about it or vented privately, but he used the bullhorn that is Twitter to fire back. Good for them both.”

Like a breath of fresh air, Mediaite played the whole fight straight down the middle.