Samenow, who also serves as the Capital Weather Gang’s chief meteorologist, attacked Drudge in an article entitled, “Drudge Report’s playing down and politicizing of Hurricane Matthew was ‘deplorable.‘”

He wrote that the Internet muckraker’s comments about the hurricane were “not only infuriating to meteorologists who knew the dangerous storm was holding its own, but it may also have put people’s lives at risk.”

“To make matters worse, Drudge took to Twitter and accused the government of purposefully inflating Matthew’s intensity to send a message about climate change,” Samenow wrote.

Drudge’s tweets, screen captured below because he deletes all of his tweets after a while, were quick to accuse the federal government of politicizing the first major hurricane to hit Florida in a decade. 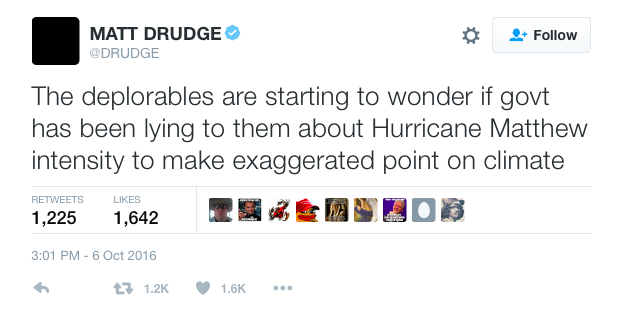 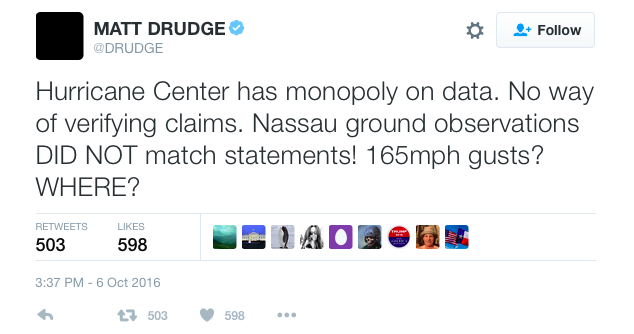 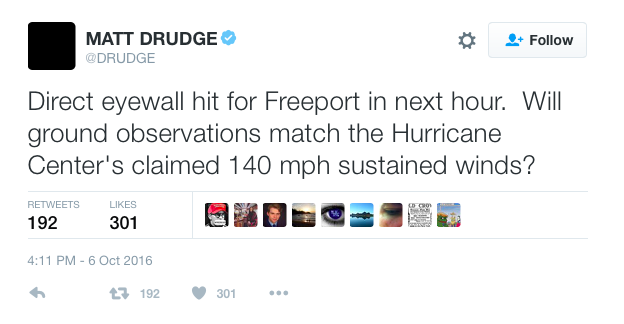 Other meteorologists were quick to condemn Drudge.

Whatever respect I had for Drudge, which was minimal to start with, was destroyed with this tweet. How insanely asinine can one be? https://t.co/aqjzjRfb8B

Following the lead of those meteorologists, others piled on Drudge to accuse him of risking people’s lives.

@DRUDGE people are going to die because of you. This is no joke. You are going to be the cause of people loosing their lives. Live w. that

@DRUDGE meteorologist Matt Drudge everyone. How will u feel if ur followers in FL die bc they worship everything u say and u downplayed it

Still, at least one user had fun with it all, posting a picture of Storm from X-Men wearing a Hillary button.