“Great work everyone,” Jesse Ferguson, the Clinton campaign’s deputy national press secretary, wrote in an April 26, 2015 email to other Clinton campaign officials. “This interview is perfect. he lands nothing and everything is refuted (mostly based on our work).”

Ferguson was celebrating Stephanopoulos’ interview with Peter Schweizer, the author of “Clinton Cash: The Untold Story of How and Why Foreign Governments and Businesses Helped Make Bill and Hillary Rich,” a book which laid out numerous examples of Clinton Foundation donors receiving political access and government favors.

The emails, which were hacked from Clinton campaign chairman John Podesta, were released on Friday by WikiLeaks.

Stephanopoulos, who was Bill Clinton’s communications director in the 1990s, was heavily criticized for the interview, both because of his aggressiveness with Schweizer and because he failed to disclose that he has donated $75,000 to the Clinton Foundation in recent years.

The references to the team’s “work” suggests that the campaign somehow shaped Stephanopoulos’ interview.

Other Clinton insiders were pleased with the interview, the leaked emails show.

“This is amazing. A pleasure to read,” campaign communications director Jennifer Palmieri wrote.

“This is therapeutic to watch,” said Clinton’s traveling press secretary, Nick Merrill. “George is cool as a cucumber, doesn’t rush into it, but just destroys him slowly but surely over the course of the interview, culminating when he asks him about A/S Fernandez confirming that HRC had absolutely nothing to do with the Uranium 1 deal.” 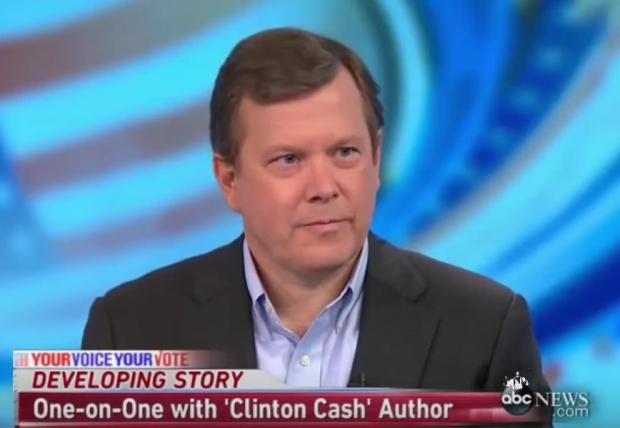 “It was beautiful to watch,” chimed in Karen Finney, a senior communications adviser for the campaign.

ABC News did not respond to The Daily Caller’s request for comment. On Sunday, network host Martha Raddatz will co-moderate the presidential debate between Clinton and Donald Trump.

Other emails discussing “Clinton Cash” shortly after the Stephanopoulos interview show that the campaign was desperate to obtain a copy of the book before its May 5 release.

The desperation reached the point where the campaign considered an option that even campaign manager Robby Mook seemed to believe might be a violation of federal campaign laws.

Mook, working off of a suggestion from Podesta, asked Marc Elias, the campaign’s general counsel, if the campaign was allowed to deploy controversial political operative David Brock to look for the book.

Brock is a former journalist and Clinton foe who now runs several pro-Clinton entities, including Media Matters and the super PACs American Bridge and Correct the Record.

The idea to put Brock to work came about on March 21.

Palmieri, the campaign’s communications director, wrote that the campaign was “having a hard time” finding the book and that it “would be big” if someone could obtain a copy.

“Feels like what Brock is good at,” Podesta wrote.

Mook responded, “Oh that’s a great idea,” and then he reached out to Elias.

“Marc, can we communicate with Brock about getting a copy of this Clinton Cash book? We need it very urgently if possible,” he asked, showing that the campaign was unsure whether communicating with Brock was above-board.

The lawyer asked if the book was a published book or a campaign research book.

“It’s a book about to be published by Harper Collins called Clinton Cash,” Mook replied.

The emails do not include a response to that question, and it is unclear if the campaign ever contacted Brock on the matter.

Brock’s super PAC, Correct the Record, currently coordinates with the Clinton campaign by exploiting a loophole in election law that allows for coordination on the Internet. However, at the time of the email exchange, Correct the Record functioned only as an opposition research arm of American Bridge, a pro-Clinton super PAC which is prohibited from coordinating with the campaign.

A day after Mook’s outreach to Elias, Podesta suggested using Brock in another capacity to push back on the book.

That exchange came in response to an email thread showing that the campaign tried to shape CBS’s coverage of the book during a segment of “60 Minutes.”

“Unclear exactly what [60 Minutes] is doing, but Craig has had an initial meeting with them to see if we can finesse this from starting off in such a ridiculous place as to have its premise be that book,” Merrill wrote.

“So the hope is that before we start having to push back on the story we have at least some hope of combatting the premise as ridiculous. And of course, having the book would help that,” Merrill continued.

Mandy Grunwald, one of the campaign’s communications gurus, asked the group “which correspondent” and “which producer” were working on the story.