“Go fuck yourself,” Jesse Lehrich wrote on Twitter during the contentious debate.

Lehrich, a longtime Democratic operative, was responding to an exchange in which Trump said that he would not have sent American troops into Iraq and that, because of that, Army Capt. Humayun Khan would still be alive.

Khan, a Muslim-American who was killed in Iraq in June 2004, became a centerpiece of the presidential contest this summer after his father spoke at the Democratic National Convention. Clinton has cited the Khan family when going after Trump for what she says are bigoted comments about Muslims.

Trump claims that he has always opposed to the Iraq War, which Clinton voted to authorize as a New York Senator in 2002. An interview he had with Howard Stern in March 2003 has been cited as evidence that he did support the invasion to at least some small degree.

“Yeah, I guess so,” Trump said when asked if he supported the Fall 2002 invasion of Iraq. “You know, I wish the first time it was done correctly,” he added. 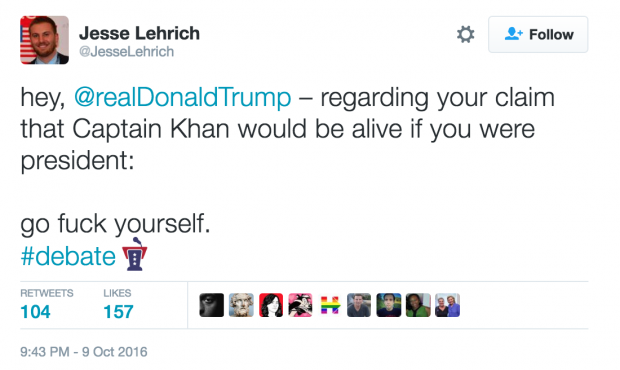 In the spin room after the debate, which was held at St. Louis’ Washington University, Clinton campaign press secretary Brian Fallon told The Daily Caller’s Vince Coglianese that Lehrich’s remark “has no place in our campaign.” (RELATED: Clinton Campaign Regrets Sending ‘Go F**k Yourself’ Tweet)

“He apologized, as he should have,” Fallon said.