James Comey had that killer look in his eye again.

The FBI’s investigation into Hillary’s hazardous email practices had generated some 10,000 pages of reports and analysis—about two and a half million words, or the equivalent of four copies of “War and Peace”—but the [FBI’s] Criminal, Cyber, Response, and Services Branch had contributed little to this mountain of evidence. So far, Comey’s cyber team had managed to retrieve only a fraction of the 31,000 “personal” emails that Hillary had wiped clean from her server in Chappaqua.

“It’s the one area of the bureau’s work that Comey thinks is subpar,” said a former Justice Department official who spoke with top FBI officials. “There have been times when the IT technicians have thrown up their hands in despair. Comey ordered the department reshuffled and doubled in size. But he’s found it hard to build an army in the middle of a battle.”

Clearly, someone on Hillary’s staff had gone to extraordinary lengths to make certain that the information wiped from the server would be virtually impossible for the FBI to retrieve. 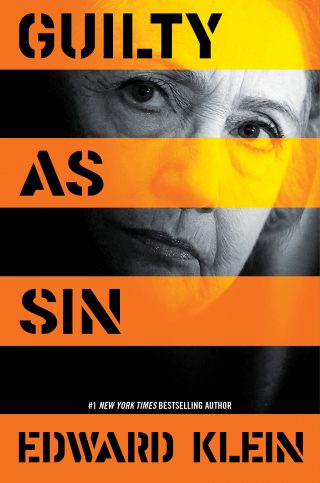 The Cover of Guilty As Sin, courtesy of Regnery Publishing.

“[Hillary] and her lawyers had those emails deleted, and they didn’t just push the delete button; they had them deleted where even God can’t read them,” said [Rep.] Trey Gowdy, chairman of the House Select Committee on Benghazi. “They were using something called BleachBit.” (A publicly available overwrite algorithm, BleachBit is used to securely erase the contents of computer hard drives to prevent recovery of files.) “You don’t use BleachBit for yoga emails or bridesmaids emails. When you’re using BleachBit, it is something you really do not want the world to see.”

The most likely suspect was Bryan Pagliano, the IT specialist who helped set up Hillary’s private email server. When Trey Gowdy’s committee subpoenaed Pagliano and ordered him to testify about Hillary’s email server, he invoked his Fifth Amendment privilege against self-incrimination. Shortly thereafter, the Justice Department granted Pagliano immunity from criminal prosecution in exchange for his testimony.

Pagliano kept Hillary’s computer security logs and knew who had access to her email system. He was aware that hackers in China, Russia, North Korea, Iran, and other countries had attempted to attack Hillary’s server. After one such attempt, Hillary’s system was shut down and her top aides were warned not to send “anything sensitive” to the secretary of state.

“After another suspicious attempt,” reported The Washington Times, “Mrs. Clinton said she was scared to open email—but failed to report the matter.”

Of all the hackers, the most infamous was Marcel Lehel Lazar, an out-of-work Romanian taxi cab driver who used the Internet moniker Guccifer—a combination of Gucci and Lucifer. Guccifer boasted that he had broken into several American computer accounts—those of the Bush family, Sidney Blumenthal, and Hillary Clinton. The FBI extradited Guccifer to the United States, where he pleaded guilty and gave jailhouse interviews to Fox News and other media outlets.

Guccifer said he had breached Hillary’s server and come across evidence that other hackers were also on her server.

With Guccifer locked away in a federal prison, Comey launched a worldwide manhunt for others who might have hacked Hillary’s email server.

“Jim wanted to track down more hackers wherever they were hiding, get them in custody and bring them back to federal penitentiaries where he could have them interrogated,” said a former Justice Department prosecutor. “If he could prove conclusively that hackers, working either on their own or for foreign governments, breached Hillary’s email server and acquired America’s most vital national secrets, he would have finally got what he’d been looking for all along—the smoking gun.”

A smoldering gun—if not a smoking one—turned up unexpectedly when Iran’s Justice Ministry announced that Shahram Amiri, an Iranian nuclear scientist, had been found guilty of being an American spy and had been hanged for treason. Critics immediately blamed Amiri’s death on Hillary, who had discussed Amiri’s fate on her unsecure—and easily hackable—email system.

“I’m not going to comment on what [Amiri] may or may not have done for the United States government,” [Sen.] Tom Cotton, a member of the Senate Select Committee on Intelligence, said on “Face the Nation,” “but in the emails that were on Hillary Clinton’s private server, there were conversations among her senior advisers about this gentleman. That goes to show just how reckless and careless her decision was to put that kind of highly classified information on a private server. And I think her judgment is not suited to keep this country safe.”

“Amiri had given Iranian nuclear secrets to the CIA and used a cover story upon returning to Iran that he had been kidnapped,” wrote Abraham H. Miller, emeritus professor of political science at the University of Cincinnati and a distinguished fellow with the Haym Salomon Center. “That story was blown in Hillary Clinton’s emails, which referred to Amiri as ‘our friend’ and discussed his providing information about Iran’s nuclear program. . . . Iran confirmed his execution and his mother confirmed receiving his body. The State Department is still withholding confirmation, as if anyone cares. The tragedy of Amiri’s death is compounded by the immeasurable harm it will do to America’s ability to recruit, now and in the future, human assets. A nation’s security is often dependent on people willing to take risks that benefit it. The likelihood of that has been greatly diminished by Hillary Clinton’s flagrant disregard of the national security consequences of her reckless email use.”