Former Virginia Chairman for the Trump campaign Corey Stewart claims the Republican Party “slithered” its way into the campaign, and siphoned off funds during a protest in front of the Republican National Committee offices in DC Monday afternoon.

“A few moments ago, now some people might know, the RNC, after Mr. Trump won the nomination, they filtered, let me just say that in a different word—the RNC slithered its way into the Trump campaign,” Stewart began.

“And let me tell you this. Let me tell you this. Just a few moments ago — because those RNC, establishment pukes, who have worked their way into the Trump campaign, just moments ago, threatened me. And they said, that if we continue with this rally, that they’re gonna terminate me as chairman of the campaign of Virginia.”

Shortly after the protest had concluded, the Trump campaign announced through the Washington Post that it had fired Stewart for his direct involvement with the anti-RNC, pro-Trump protest.

“Former Virginia State Chairman Corey Stewart is no longer affiliated with the Donald J. Trump for President campaign,” said Trump’s deputy campaign manager, David Bossie, in a statement. “He is being replaced, effective immediately. Corey made this decision when he staged a stunt in front of the RNC without the knowledge or the approval of the Trump campaign.”

An unnamed representative with the Trump campaign repeatedly asked Stewart and others to leave both before and after Stewart’s speech, Members of the crowd surrounded and harassed the representative, demanding to see her ID, or any other credentials. 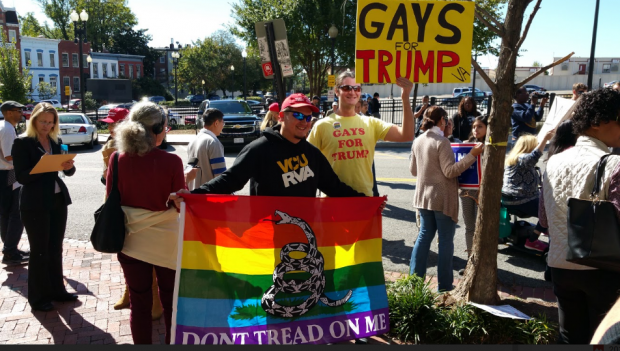 An unnamed protester spoke during the video, reading Trump’s tweets against Speaker of the House Paul Ryan, and exclaimed that it didn’t look like Trump himself wanted the protest to end.

“The latest tweet that I see here from Mr. Trump, which I just read but the lights not good now, said something to the effect that ‘Paul Ryan should spend more time focusing on the budget and fixing illegal immigration, than on attacking the Republican nominee.'”

“Wherever that very unpleasant traitorous woman is, who is screaming at us saying Donald Trump, she speaks for him and he’s ordered us to leave, ma’am, it doesn’t sound like he wants us to leave!”

Several coalitions turned out, but the event was organized by the very vocal, “Virginia Women for Trump” organization.

“I’m here to support Trump and get the RNC to realize we are very serious about putting this man over the finish line, I think there is too much turmoil going on about them wanting to do the political thing, so we are here to encourage them to do the right thing, to go with the candidate that we selected, and we voted on. The candidate that we intend to see over the finish line,” Protester Rita Solon told The Daily Caller News Foundation.

One gentleman held up a sign that read, “Better to grab a pussy than be one,” and he had some choice words in his support of Trump. 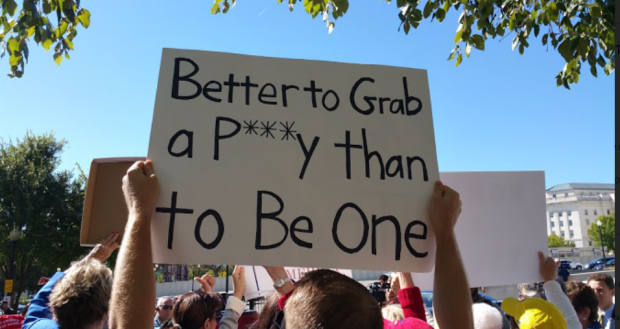 “Better to grab a pussy than to be one” Phillip Stucky

“I’m here to support Trump against these cowards who would fold like a cheap tent soon as the going gets tough. The same people who have been marching from one loss to the next for the past 20 years. GOP elite, beltway elite, conservatism, INC. Beautiful losers.”