Daily Mail‘s David Martosko is persona non grata within the Hillary Clinton presidential campaign. He thought it was all cool that he drove fast behind Clinton’s motorcade.

But they actually found him completely irritating.

So much so that in the summer of 2015, the Clinton campaign contemplated having him physically removed from the press pool.

In the latest WikiLeaks email dump, aides made it clear that they found him “disturbing.”

They even made plans to alert the Daily Mail.

Palmieri wrote, “Elias – we would like to do a call with you to discuss the letter pasted below that we are considering sending to the Daily Mail. Varun – can you set up a call with Marc sometime tomorrow or Wednesday? Thanks, Jen.”

Podesta chimed in, “Should we say we find them disturbing and hope that you will take steps to end this behavior?”

Palmieri explained what she really wanted.

Which was Martosko way the hell away from the Clinton campaign:

“So I did not do that because what I really want is just a reason to exclude him from the pool and don’t want them to fix the problem,” she wrote.

Here’s the letter they devised:

“On two separate occasions during trips to Iowa and New Hampshire, David attempted to trail the motorcade between event stops, getting dangerously close to the point where the state police escorting the motorcade had to pull him over on more than one occasion. He also made a false report about the speed of the motorcade, claiming that it was traveling at speeds higher than it was, and posted video that indicated he was speeding in pursuit of the vehicles, which the Iowa Department of Transportation and others refuted and cited concerns about.

“We strive to run an open campaign that facilitates journalists’ ability to cover us in a safe and professional environment. At times David has conducted himself perfectly professionally at our events. At times he has been disruptive – shouting over and disrupting other reporters to the point that other journalists have complained to the campaign. We expect that kind of exchange during the rough and tumble of a presidential campaign. But we find the motorcade incidents disturbing and wanted to bring them to your attention.”

Martosko claimed on Twitter that police never pulled him over for trailing the Clinton motorcade too closely. He also says he prefers to be called “investigative journalist” as opposed to “stalker.” 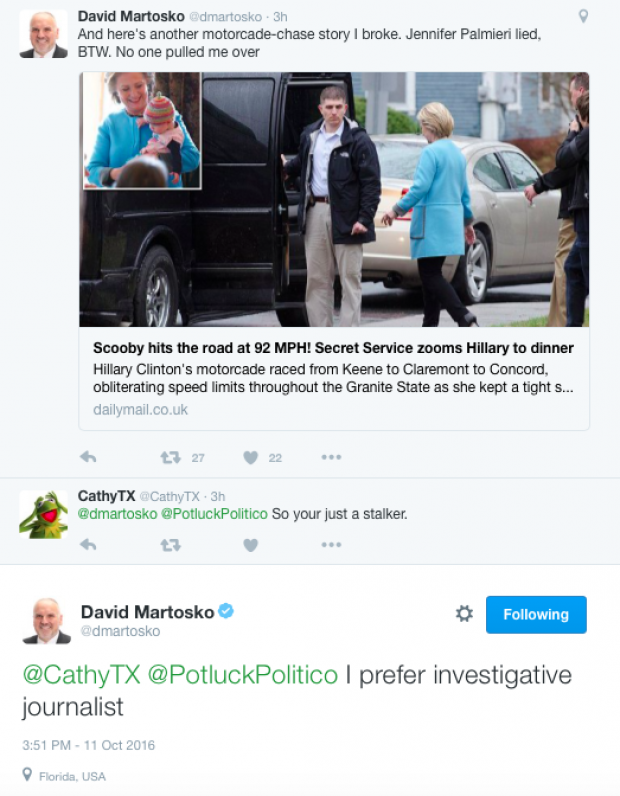