“Women of all political stripes have told me that #Trump’s scowling, hovering presence near #Hillary Sunday scared them. Men didn’t notice.”

“I would say it’s an overstatement to say he was colluding with the campaign.” — Craig Melvin on MSNBC Wednesday.

Washington Examiner correspondent takes a baseball bat to the NYT

MSNBC’s Brian Williams: “When do we reach toxicity?”

MSNBC analyst Nicolle Wallace: “We are already there. We are chocking on it.”

“Trump sounds exactly like strung out Elvis when he used to spend half of his show trying to convince the crowd he wasn’t strung out.” — Peter Ogburn, executive producer, The Bill Press Show.

“I could get more graphic but I don’t want to get weird here.” — Anonymous.

Breitbart News is a POS publication

This is how Trump denies sexual assaulting a female reporter 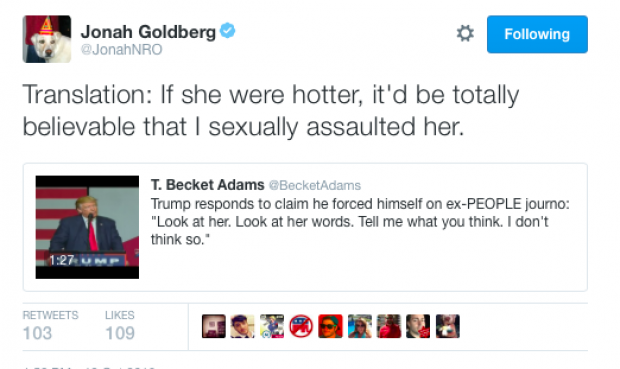 And there’s this on Trump’s speech…

“Just a reminder: this Trump speech is from the teleprompter.” — Julia Ioffe, contributing writer, Politico Magazine. 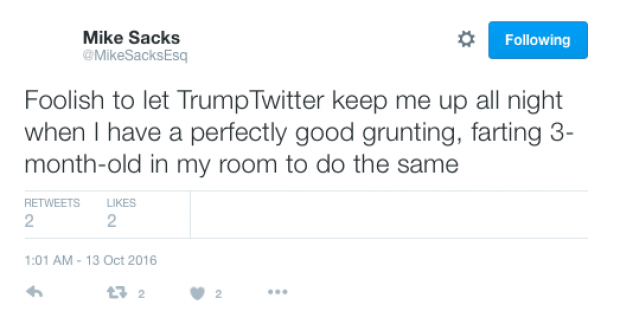 “The poop is just gonna keep on coming.” — Whoopi Goldberg, ABC’s The View.