Every time Kevin Durant does or says anything with or about his new team reporters run to his old teammate Russell Westbrook for comment. And Russell is done with it.

The latest Durant news that reporters questioned Westbrook about came from comments Durant made at an award ceremony for the Golden State Warriors on Tuesday, according to Deadspin.

“You can feel it when you walk in the door, in the practice facility, everybody is just together. That’s something that I can appreciate as a basketball player and someone who values relationships. You can tell that that’s what they stand on, that’s what we stand on. I feel really grateful to play for a team like that and play with a bunch of players who are selfless and enjoy the game in its purest form.”

Not really much to see there, but that didn’t stop reporters from asking Westbrook about it after Oklahoma City’s practice Thursday.

Westbrook on Durant’s comments this week: “That’s cute. We’re gonna worry about all the selfish guys we’ve got over here, apparently.” pic.twitter.com/FLjzjAZgla

One reporter read part of Durant’s comments to Westbrook to which he said “that’s cute, man. That’s cute. My job is to worry be able to worry about what’s going on here. We’re going to worry about all of the selfish guys we got over here, apparently.”

Reporters didn’t feel like they got what they were looking for there and continued to question the Thunder star about his old teammate before Westbrook stopped them.

“I don’t care. To me it doesn’t matter. My job is to worry about here. Honestly, I’m really tired talking about it. So, anytime anybody asks me another question I’m not gonna answer. Just FYI. So, I’m not taking about it no more,” he concluded. 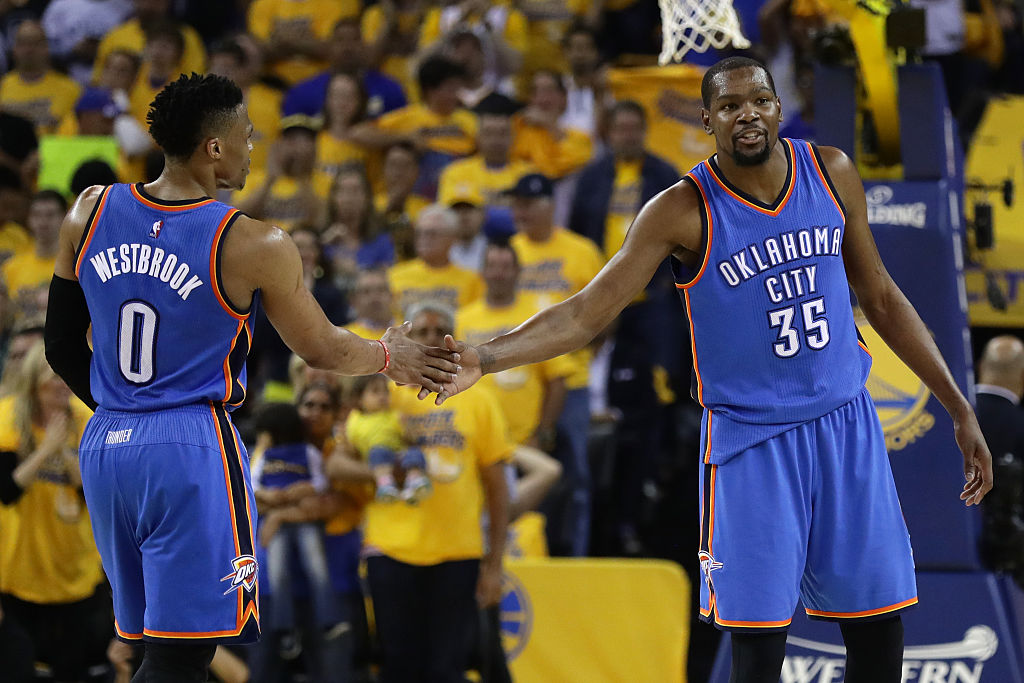 Durant and Westbrook on the court during Game Five of the Western Conference Finals against Golden State. (Photo by Ezra Shaw/Getty Images)

The Oklahoma City point guard claims he hasn’t talked to Durant since he decided to leave for Golden State. The two will face each other for the first time on November 3 in Oakland.