Twitter suspended the account of conservative activist James O’Keefe in the hours before and during his release of a video of a Democratic senatorial candidate saying Hillary Clinton might use executive power on guns.

O’Keefe went undercover to a August fundraiser for Wisconsin Democratic senatorial candidate and former Sen. Russ Feingold in California. O’Keefe asked Feingold what Clinton could do about gun control and Feingold replied, “Well, there might be an executive order.”

[dcquiz] Amy Rao, the host of the fundraiser and a Clinton donor, is also featured in the video. Rao told O’Keefe, “Hillary wants to shut it down. If we can get guns away from everyone in this country, she’ll close the loopholes, she’ll get rid of assault weapons, she will get rid of being able to buy you know, unlimited bullets, she’s gonna make all that stop.”

Twelve hours before the release of the video, Twitter suspended O’Keefe’s account and as of Thursday afternoon it remains suspended. 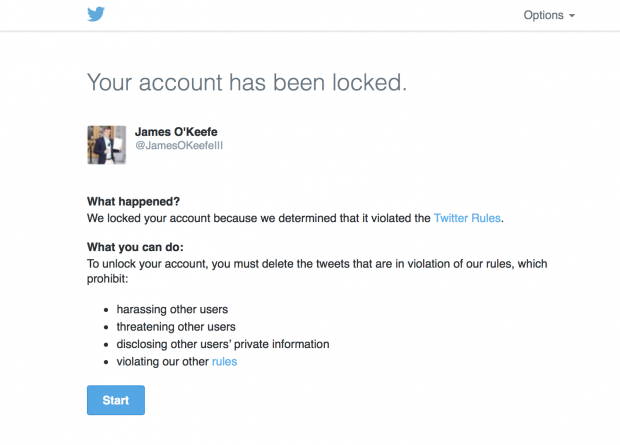 Twitter does not comment on the suspension of individual accounts. A spokesman for the social media site pointed The Daily Caller to their rules on posting private information. This rules include “intimate photos or videos that were taken or distributed without the subject’s consent.” This would imply that O’Keefe’s style of hidden camera journalism is against Twitter’s rules.