Emails released by the State Department — some of which were provided to the watchdog group Citizens United — show that Dow’s CEO, Andrew Liveris, had such access to Hillary Clinton that he was able to personally pass the then-secretary of state a letter in 2010 that he hoped would help his company as it faced a political firestorm in India.

The emails also show that Doug Band, Bill Clinton’s former body man and a Clinton Foundation adviser, reached out to Hillary Clinton’s deputy chief of staff, Huma Abedin, to inquire on Liveris’ behalf about the letter, which was intended for Manmohan Singh, India’s prime minister at the time.

The document concerned the 1984 Bhopal gas leak, which led to the deaths of 8,000 rural Indians. Dow Chemical bought the faulty pesticide plant from Union Carbide in 2001. But activists and some Indian politicians wanted Dow to be held responsible for the tragedy. Liveris hoped to limit the company’s exposure.

At the same time that Band was leaning on Hillary Clinton via Abedin, he was in the final stages of creating Teneo Holdings, a consulting firm that would later have Dow Chemical as a client and former President Clinton as an “honorary chairman.”

J.T. Mastranadi, the political director at Citizens United, said that emails his group obtained show that the Clintons cultivated relationships like the one with Liveris and Dow for financial and political gain.

“It appears that part of the Clinton mission during the four years at the State Department was finding ways to keep big donors engaged for the future,” Mastranadi told The Daily Caller.

Liveris has appeared at several Clinton Foundation and Clinton Global Initiative functions. He also loaned Bill Clinton a Dow company airplane to help out with a humanitarian mission in 2009 to free two American citizens from North Korea.

Dow Chairman and CEO Liveris participates in discussion during the second day of the Clinton Global Initiative 2012 (CGI) in New York. (REUTERS)

Dow paid even more money to Teneo than it did to the Clinton Foundation and Clinton Global Initiative. And it is the Clintons’ relationship with the consulting firm that padded the former first family’s pockets.

Reuters reported last year that Dow paid Teneo $2.8 million in 2011 and another $16 million in 2012. During that same time period, Bill Clinton was set to be paid $3.5 million as honorary chairman at Teneo, which Doug Band co-founded with Declan Kelly, a former Hillary Clinton campaign financier and State Department appointee.

Kelly’s multiple roles in the Clinton orbit expose another potential conflict of interest.

Kelly, who was appointed by Clinton as the State Department’s special economic envoy to Northern Ireland in 2009, was paid $2.4 million by Dow, Politico reported earlier this year.

And he appears to have been working on Dow’s behalf at the same time he was at State. In March 2011, Kelly was quoted in a news article as Liveris’ spokesman. He left the State Department that May.

Huma Abedin, who is now vice chair of Hillary Clinton’s campaign, also pulled double duty. She was hired by Teneo in 2012, while still at State and while she held a position at the Clinton Foundation.

Teneo benefited enormously from its relationship with Bill Clinton.

“They used the Clinton connection to launch it,” a former Teneo employee told Politico. “The pitch was: ‘Yes, we’ll be just as good as anybody else at doing the substantive work that you need a consulting firm to do for you — but we’re going to bring all these relationships to the table at the same time.”

Clinton reportedly kept only $100,000 of the $3.5 million because of the controversy that later erupted over his relationship with the firm.

Band sought access to the Clinton State Department, and Hillary Clinton herself, even before he launched Teneo. 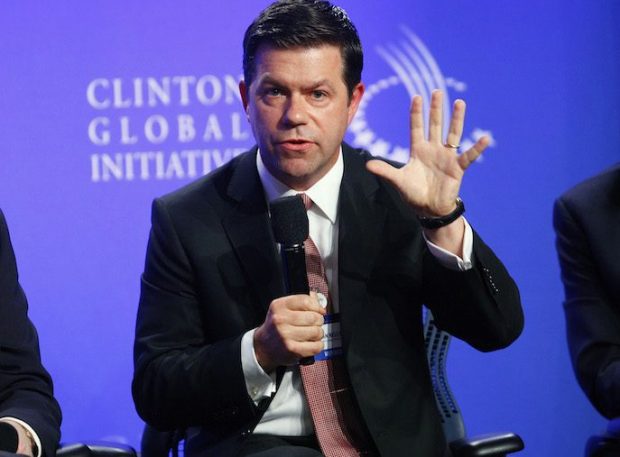 “Need show him love,” Band wrote to Abedin in a July 26, 2009 email that the State Department provided to Citizens United.

“Can you all pull him to say hello to her backstage or greet and have her mention both me and wjc?” Band asked.

“Yes for sure on your guy,” Abedin replied.

The next year, Band reached out to Abedin to inquire about the Bhopal letter Liveris hand-delivered to Hillary Clinton.

In an Oct. 5, 2010 email exchange, Abedin forwarded an email from a State Department aide showing that Clinton had not given Singh, India’s prime minister, the letter.

“But why,” Band responded to Abedin.

“As I understand it, hrc is the one who strongly opposes,” Abedin responded. “She is the one who told me she told [State Department deputy under secretary of state Bill Burns] to tell Andrew [Liveris] we couldn’t help. She didn’t actually give the letter to anyone. She still has it.”

The email chain is the first released to date which shows that Liveris asked for something from the Clintons or the Clinton State Department.

“I will ask her directly. Cause everyone is deferring to her,” wrote Abedin.

“[Under secretary Robert Hormats] spoke to Liveris directly last week to tell him that we would not be passing any paper. U/S Hormats then discussed the Dow issue when he met with Montek Ahluwalia on Saturday, Oct 9,” Loren Giallanella Murad, the State Department’s India desk officer, wrote in a Nov. 4, 2010 email.

The pressure to punish Dow was not limited only to compensation to the victims of the gas leak. Activists disrupted other Dow Chemical operations, including other manufacturing plants on the sub-continent.

Ahluwalia served at that time as India’s deputy chairman of the planning commission, a powerful role on the level of a U.S. cabinet position.

“[Hormats] articulated that it would look really bad to reopen a settlement and Ahlowalia took that in, but made no commitments,” Murad wrote in the email.

It is unclear if Clinton ended up passing Liveris’ letter forward or if she intervened on Dow’s behalf on the matter in any other way. Dow Chemical did not respond to a request for comment on the contents of the letter or about its relationship with Clintonworld.

Band also did not respond to a request for comment.

While the State Department and Obama administration did not publicly intervene on Dow Chemical’s behalf in the Bhopal issue, no action was taken by the United States to punish the company or to help out Indian activists who wanted resolution in the case.

The emails provide a glimpse into the Clinton’s “sleazy world of high-level access and influence,” says Tim Edwards, a spokesman for the International Campaign for Justice for Bhopal.

“For twelve years Dow Chemical CEO Liveris has acted to prevent survivors of Union Carbide’s 1984 gas disaster in Bhopal, India — some of the poorest people on the planet — obtaining adequate medical care, compensation and justice from his company,” Edwards told TheDC.

“Payments by Dow to the Clinton’s Global Initiative appear to have persuaded both Bill and Hilary Clinton to take a supporting role in Liveris’ deplorable work,” he added.

Teneo’s relationship, with Dow Chemical and other companies, appears to have caused a rift in the Clinton orbit, emails hacked from Clinton campaign chairman John Podesta show.

One of those emails, published by WikiLeaks last week, shows that in Dec. 2011, Chelsea Clinton complained to Podesta about Band, Kelly, and Teneo. She also mentioned Liveris and Dow. (RELATED: Former Clinton Foundation Adviser Complained About Chelsea ‘Sticking A Knife In The Back And Front’)

“On another note, I was in London Sunday and did a Foundation event Sunday evening and two people separately voiced concerns directly to me about Teneo, neither of whom I know well,” wrote Clinton, who took on a more active role with the Clinton Foundation in 2011.

[dcquiz] Clinton reported that a Teneo employee identified as Ilya Aspis “has called Members of the House and Members of Parliament, ‘on behalf of President Clinton,’ for Teneo clients.”

She cited “Andrew Liveris and Dow” as an example of those clients.

Clinton said that the contact was made “without my father’s knowledge and inelegantly and ineffectually at best” and that “worse,” the exchange led to “people in London making comparisons between my father and Tony Blair’s profit motivations.”

Saying that such allegations “would horrify my father,” Clinton went on to claim that an ex-Teneo employee who she knew had quit the firm because “of what Doug and Declan asked her to do/ pretend was happening for their clients at Davos.”

The ex-employee was Sara Latham. She now works for the Clinton campaign.

The reference to Blair is not made entirely clear in the emails. But the former U.K. prime minister also worked for Teneo as a consultant. That relationship caused a media firestorm in the U.K. and India when it was revealed in 2012 because of Dow’s connection to the Bhopal gas leak.

A Financial Times article detailed how Blair came under heavy scrutiny from Bhopal activists after he signed on as an adviser to Teneo. They were particularly upset that Dow Chemical had become a sponsor of the Olympics.