Rep. Sheila Jackson Lee (D-Texas) appeared on MSNBC Friday with a giant yellow flower on her shoulder to answer to a bizarre charge: Is she a stalker?

Even anchor Craig Melvin noticed the honking blossom and complimented the congresswoman on her, er, wonderful fashion taste.

She laughed and thanked him.

But it was time to get down to business. Namely, WikiLeaks.

Jackson Lee turned up in an email in which Hillary Clinton‘s Campaign Chairman John Podesta called Jackson Lee a “stalker” for her pushiness in getting Hillary to attend an event at Texas Southern University.

Melvin asked her — seriously — is she a stalker?

“Well I tell you I am one hard worker when it comes to helping young people,” Jackson Lee replied, denying the charge. “Texas Southern University is a school that Barbara Jordan went to and we honor her …and they give the Barbara Jordan medallion and frankly it was an exciting event. Three thousand people came and it was an opportunity for Hillary Clinton to give her most magnificent  and detailed agenda regarding protecting voting rights in America.”

But really, Melvin pushed, is she a stalker?

Jackson Lee may not be a “stalker” but she has been known to swear at her male staff members, calling them names like “you stupid motherfucker.” (Hey, you can’t say she doesn’t fight for her constituents even if she verbally abuses male underlings in the process.) In 2014, Washingtonian named her the “meanest” member of Congress. In 2011, analysis by her hometown Houston Chronicle showed her to have the highest staff turnover in the span of a decade in her state’s delegation. 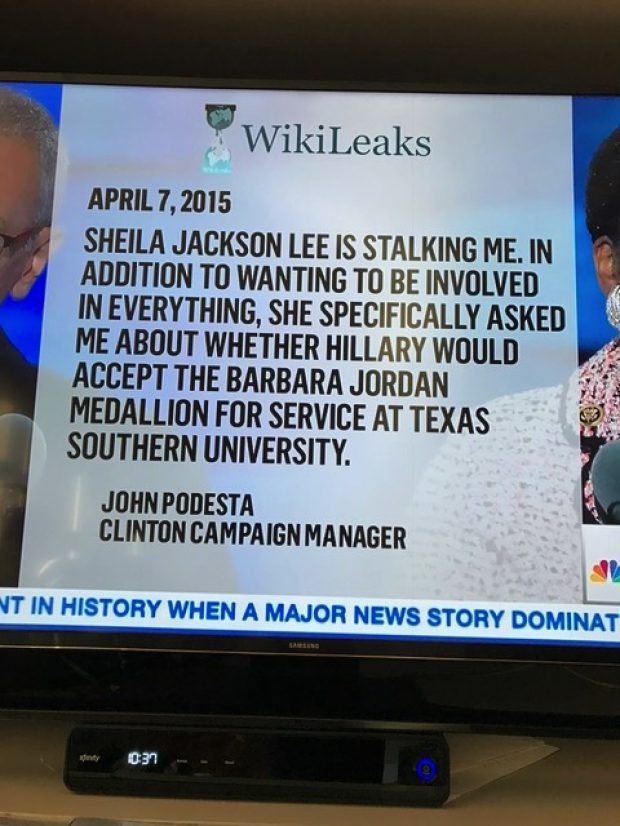 As for that giant flower, this is not the first time her fashion sense has been called into question.

In 2014, Jackson Lee wore a proper suit on top but slipped on flip-flops and made her way to the House floor. Wearing flip-flops in the Speaker’s Lobby is a serious no-no much less inside the House Chamber. The news emerged on a few gossip blogs. The Hill‘s “In the Know” blog referred to her shoes as “summer recess-worthy thongs.”

To be fair, she wasn’t the only one who incorporated a jumbo-sized flower into her Friday ensemble. Anchor Tamron Hall did as well (see below).

On the upside,  Jackson Lee said cheerily of Team Clinton, “They followed through. They got it done. She had a great time. It reflected on the university.”

The congresswoman made a sharp pivot to attacking Donald Trump.

“How terrible it is to use a term, ‘nasty woman,'” she said. “The American people, the voters, won’t forget that when they go to vote.”

And if they watched the congresswoman on MSNBC Friday, they also won’t forget that flower. 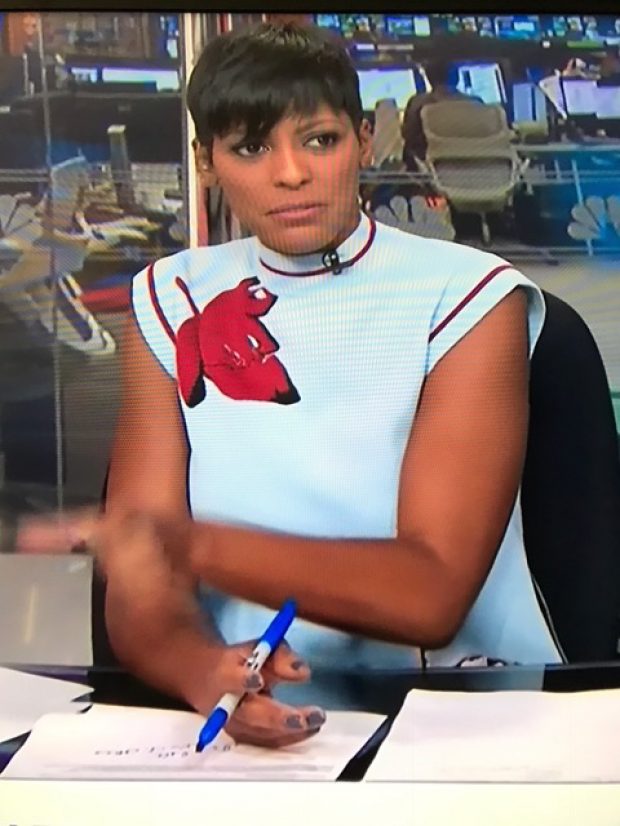