A more confident and slightly spicy Gary Johnson emerged Monday morning at a packed event at The Washington Post.

This Gary Johnson — the Libertarian candidate who is polling at 5 percent — is no longer embarrassed about his “And what is Aleppo?” moment. And this Gary Johnson isn’t mortified that he choked when MSNBC’s Chris Matthews badgered him to name his favorite living foreign leader.

His fans don’t give a crap. And neither does he. They ate up his honesty. They inhaled his genuineness. Most of all, they are visibly relieved he’s not Donald Trump or Hillary Clinton.

Hundreds of well-behaved voters showed up to a theater at Washington Post headquarters in downtown D.C. to watch Johnson being interviewed by “The Daily 202’s” James Hohmann. There were no real gotcha questions. No hecklers. No one being escorted out. No one punched in the face. No one being called a “pussy.” It was just Johnson being his most Johnson-y self — flaws be damned.

Johnson is no diva — he arrived well before his 9:45 a.m. call time. His staff was exceedingly pleasant to WaPo event organizers. 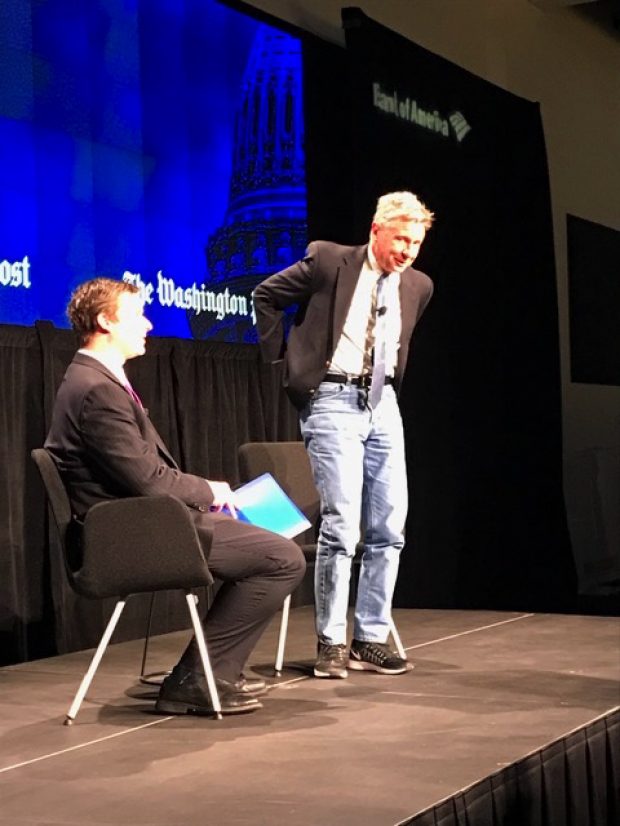 Looking very business on top, party on the bottom, Johnson’s fashion style is professionally relaxed goofball. He wore a black blazer, white button down, red tie, and sky blue mom jeans. He finished off his ensemble with black Nike running shoes. Before the event officially began, he stood on stage and tucked his shirt into his jeans.

Johnson was introspective as he recalled his experience with politics. “I held a lot of people on pedestals,” he said, recalling when he first became Governor of New Mexico. “What I found were a lot of empty suits, people who were interested in getting reelected.”

He does not think of himself as a “spoiler” in the race.

“No,” he said. “Nothing is going to change if you don’t vote for the person you believe in.”

When Johnson spoke about immigration, he brought up New Mexico’s strong hispanic population. “It would be sending you to Mars,” he said, adding incredulously, “Send you to Mexico and you’ve never even been there? We are a country of immigrants. Building a fence across the border is nuts and they won’t pay for it.” 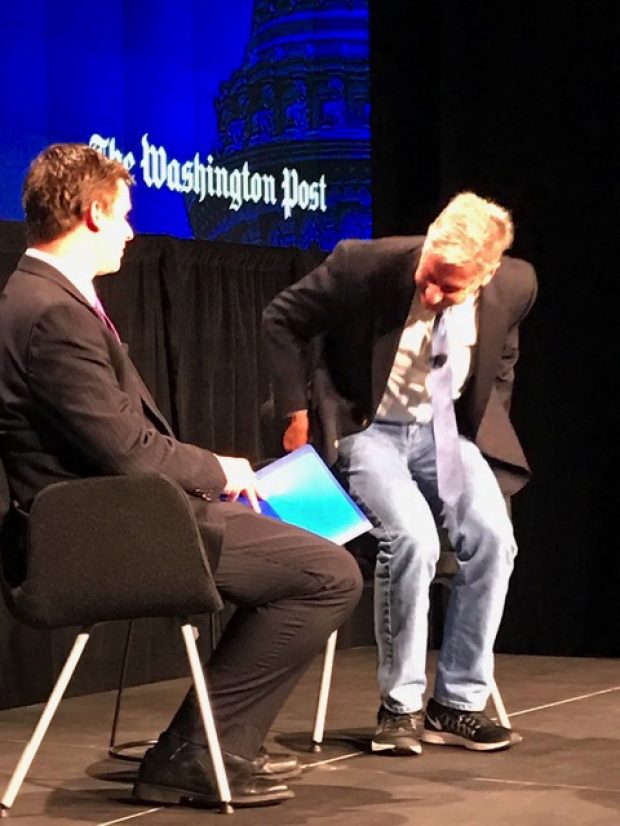 Marijuana came up quick. As did heroin, cocaine and opioids.

Talking about himself in third person, Johnson said, “I think it’s about Gary Johnson and he’s the only one who knows anything about this issue.” He asked, “Are we going to talk about marijuana then?”

Hohmann, an easygoing interviewer, let him have the floor on pot. “Apparently pot users don’t vote,” he said, noting that he presumed everyone who ever smoked weed would give him a dollar but it didn’t happen.

Johnson believes that 90 percent of the drug problem in this country is “prohibition related” and not “use related.”

He went on: “Let me just tell you something about cocaine. Cocaine puts holes in your heart. Whitney Houston — that’s your typical cocaine user who dies at 50 from a heart attack.”

At this moment it was hard for Johnson to top Johnson. He moved on to heroin. He spoke of a program in Zurich in which they hand out free heroin and needles. “Zurich is a much better place today,” he said.

Hohmann played clips of the final debate and asked Johnson to react.

He and the audience listened to Trump call Hillary “such a nasty woman.”

Johnson said, “Such a nasty man.” The crowd roared.

He had the audience in the palm of his hand when he declared, “I do believe that Trump is toast.” 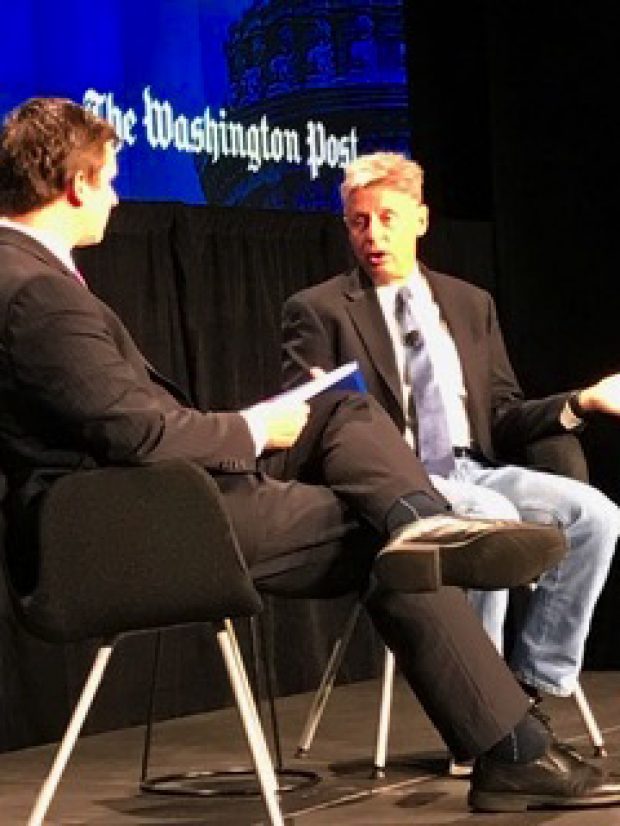 The most uncomfortable moment came when Hohmann made Johnson relive MSNBC’s Matthews bullying him into naming a foreign leader and Matthews kept ratcheting up his assholeish-ness. The audience was stone cold silent as Johnson looked down at his feet as the awkward moment played on a jumbo screen behind him.

“For the most part, politics is about getting elected or reelected,” he said. “That you should be able to dot your i’s and cross your t’s on the names of foreign leaders or geography…that makes you qualified. That lets you demand regime change. THAT PISSES ME OFF.”

In an elevator ride up to the event, an older white guy in a checkered shirt said, “Come on, let all the Japanese into the elevator.” There were no Japanese people in the elevator. His wife half-punched him in the ribs to shut up.

The door opened. “This way,” a female WaPo chaperone said, ushering the crowd in to a breakfast buffet of granola, yogurt, apples, biscuits, juice and coffee.

Getting all meta, a man in a bright red turban gestured to the scene and told his friend, “This is the whole problem with the election.” His friend replied, “Herds.” Turban-man said, “I guess they’re separate herds.”

The guy in the turban is a big defender of Gary Johnson flubs. “I was in a class and on my final exam I blanked,” RunDeep Singh told The Mirror, explaining that he majored in Jewish studies at Hunter College. “He recovered and answered to his mistakes.”

He does know Johnson will likely lose, right?

“I don’t know anything,” Singh replied. “I don’t believe in polls having worked in media for 20 years.”

The closest thing to an argument was quiet discussion.

Husband: “Somebody stole our seats.”

Husband: “I thought about that.”

After the show was over, fans congealed in a hallway to see Johnson. Among them: Independent Journal Review‘s Benny Johnson, who blended in well in the most casual, anti-Washington jean outfit ever. Thankfully there was only one way out.

“He really won me over with free heroin,” a woman said of the candidate on her way out of the auditorium.

Michael Vanscoyoc, a college student in from Gettysburg, Va., said he was on the fence before Monday’s interview. Now he’s voting for him. “I thought he was great,” he said. “He’s not extreme on either side. He’s very honest.”

Two women in an elevator cooed, “Such a sweetheart” and “down to earth.”

Johnson came out and was immediately hounded.

“One picture,” yelled McMaon. “He’s gotta go to the bathroom.”

Another guideline for the crowd: “No policy discussions because of time. Just ‘hi.'”

A good natured Johnson came out of the bathroom all free and easy. He worked the crowd, laughing and smiling and taking as many pictures as his fans wanted. 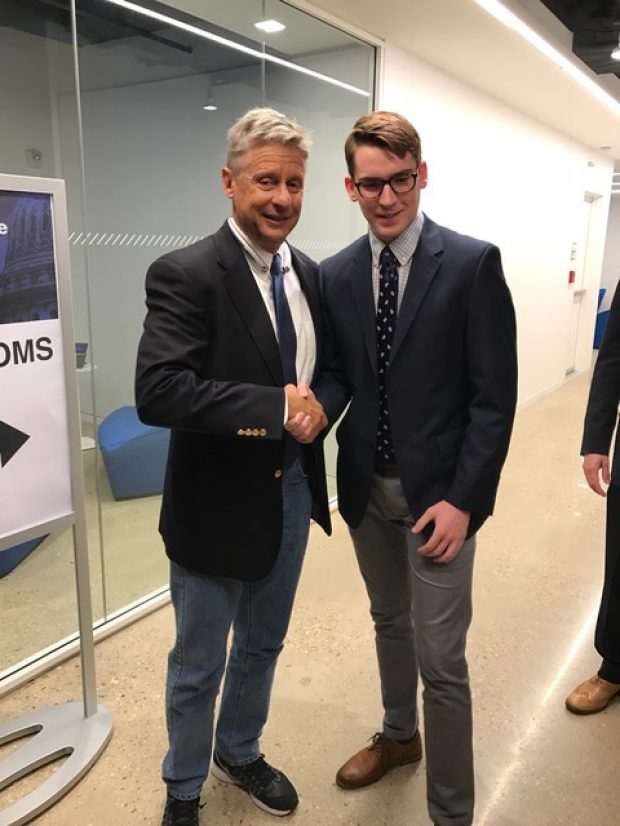 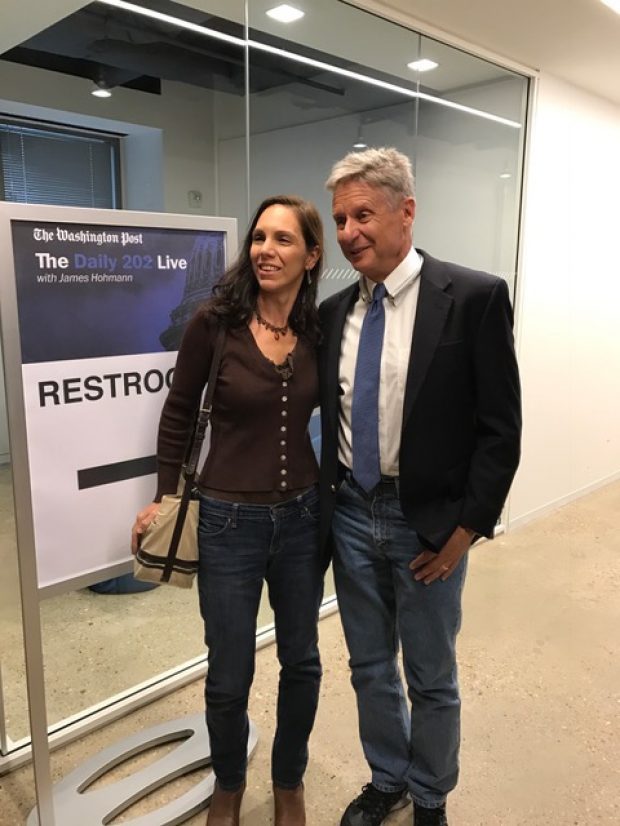 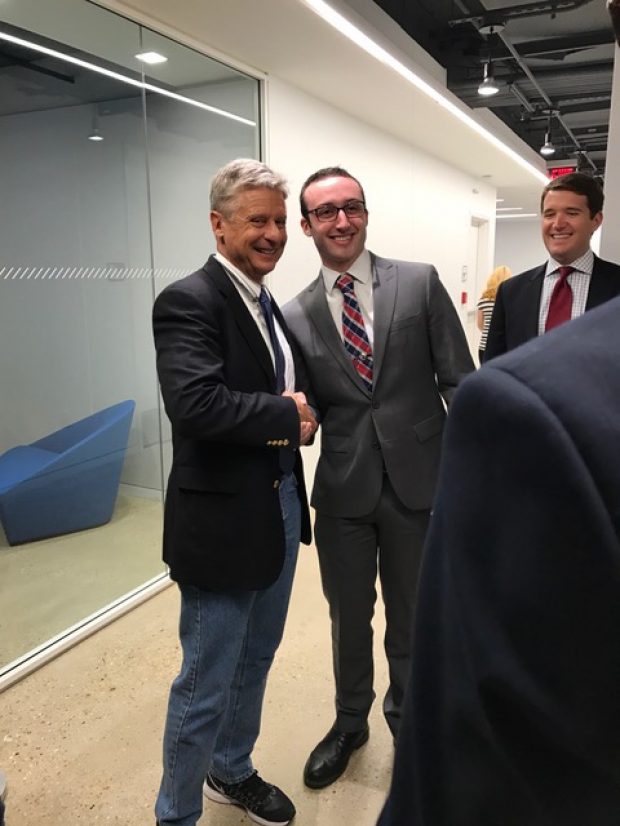 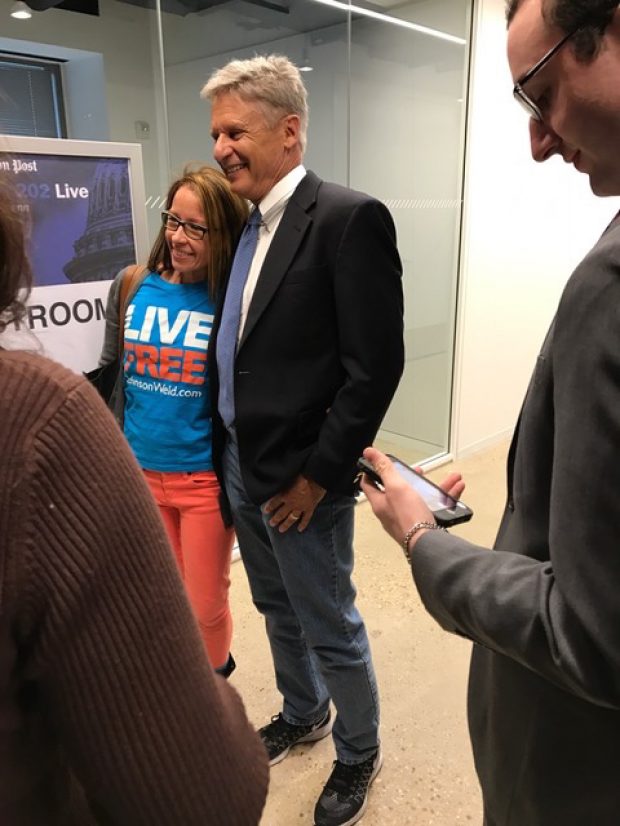 The Mirror asked why he stuck his tongue out at MSNBC’s Kasie Hunt during an interview in which she physically pulled her face away from him.

“She asked me what I’d need to do in a debate,” he said, sticking out his tongue to further explain himself. “I thought it was kind of funny.”

Johnson described his feeling going into the election as water rising.

“If I win one state, I’ll probably win eight states,” he said. “…I’d love to be president, I really would. Regardless, I think the Libertarian Party will be a real force going forward.”

He snuffed out any chance that he’d ever run for anything again.