FARRELL: It Will Take An Act Of Courage From Trump To Get America Working Again

A federal government agency spent more than $4,000 creating an online bot that would police people’s language, encouraging them to avoid words like “guys” and “dudez” because they exclude women.

The revelation is part of a new report from the investigator general of the General Services Administration (GSA). The report analyzed 18F, a federal organization that tried to imitate tech start-up culture within the federal government by recruiting tech-savvy employees who could respond quickly to various government tech needs. The hope was that 18F could also break even or turn a profit by selling its services outside the federal government.

Instead, the report found that 18F employees waste tremendous amounts of time and money on products and endeavors of very dubious utility. One such product, the report says, was a digital “bot” created to police employee language when using the Slack messaging app.

“The ‘Slackbot’ polices a user’s text for the pronouns ‘guys,’ ‘guyz,’ and ‘dudes.’ When the bot detects these pronouns, it prompts the user to consider replacing the pronoun with an option, like ‘team,'” the report says.

The report even includes a screenshot of the bot in action. 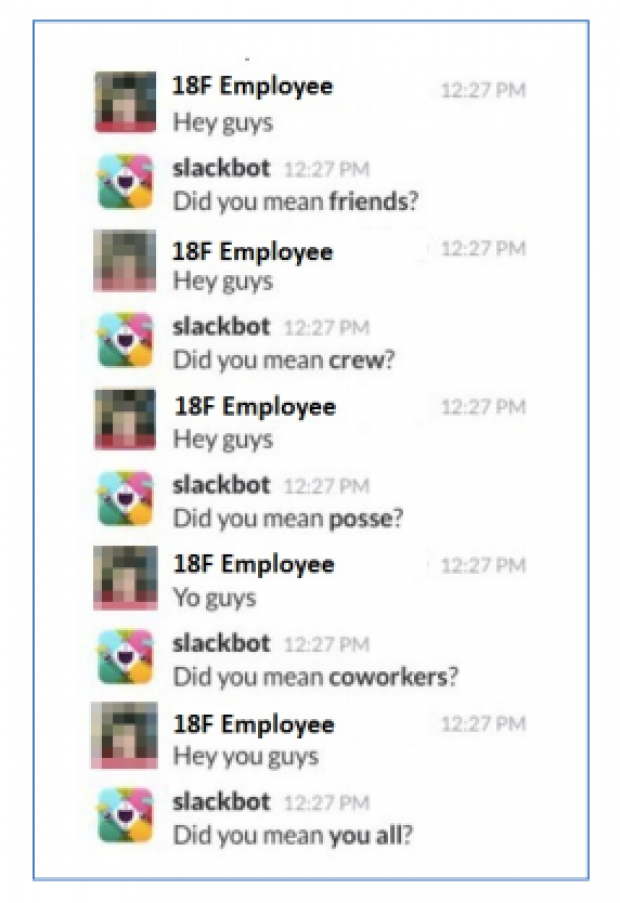 The report includes an exhaustive list of the bot’s suggested alternative phrases, which include: all, buds, compatriots, coworkers, crew, fellow humans, folks, friends, gang, mates, pals, people, posse, team, y’all, you all, mateys, persons of any kind, organic carbon based life-forms living on the third planet from the sun, comrades, and cats.

18F boasted previously about designing the bot, though it garnered little attention at the time.