The interview, which devolved into a shouting match over Kelly referring to Trump as a “sexual predator,” struck a nerve with Jones, who sided with Gingrich.

“Woohoo, he slammed this nasty heifer!” Jones said of Gingrich in a tweet she has since deleted but is screen captured below. 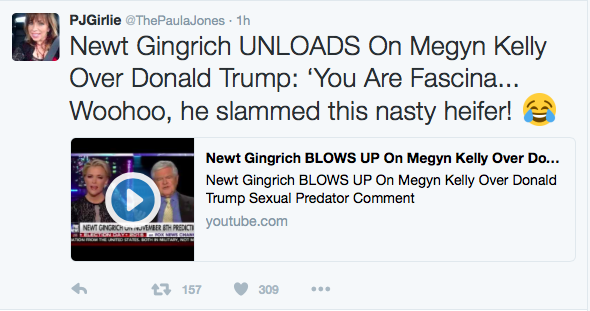 Jones then launched another attack on Kelly, saying she only cares about Trump’s alleged victims.

Lets get this straight…Megyn Kelly isn’t for all women…she hates Trump, so she’s only for those so called victims! NEVER for me!

@sandykaye38 you have him confused with Bill Clinton!

@Ravenscroft1966 that’s not a bad name…I’m getting called horrible names, oh, but that OK! Huh??

@GOPbaldspot why is heifer a bad name…there are many more that are so much worse!

@KingBabaBooey nope…I have a state police who took me up there, sorry to disappoint you!