“I abhor everything that Donald Trump stands for,” Bill Murray, an Arlington resident, told The Daily Caller News Foundation. “Any small thing I can do to get the word out that he is an abomination and the head of the basket of deplorables, that does exist, is why I’m here.” 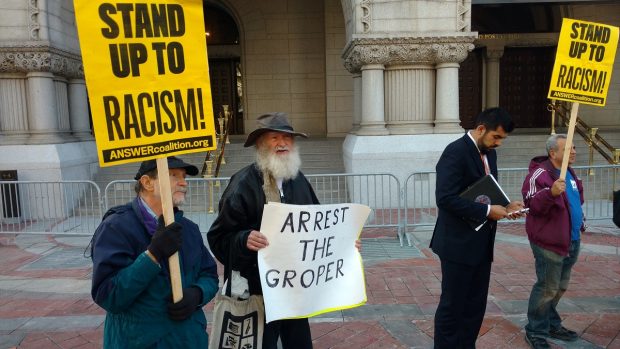 Activists from the organizing group ANSWER Coalition stood with members of Code Pink and other protesters, waving signs and calling Trump racist while speakers repeated that they were “building a wall against racism and bigotry.”

Trump International Hotel hosted a grand opening ribbon cutting ceremony Wednesday, but many protesters said they remain committed to shutting down the hotel. Some believe his campaign will lead to vacancies, which will eventually put a financial drain on the nominee. In the meantime, some speakers called on the hotel to open its doors to the homeless in D.C.

Mayor Muriel Bowser attended a ceremony when Trump broke ground on the hotel in 2014, but did not make an appearance at the ribbon cutting ceremony Wednesday.

“I haven’t heard a word of anything specific on how he would create jobs here,” Chris Hager, a protester and resident from Falls Church Virginia, told TheDCNF. “Now I don’t know how much Hillary can do to improve the game but at least she has a big circle of people who are experienced. If she has the judgement, which she has not always shown, to take the best advise, we’ll be able to make improvements.” 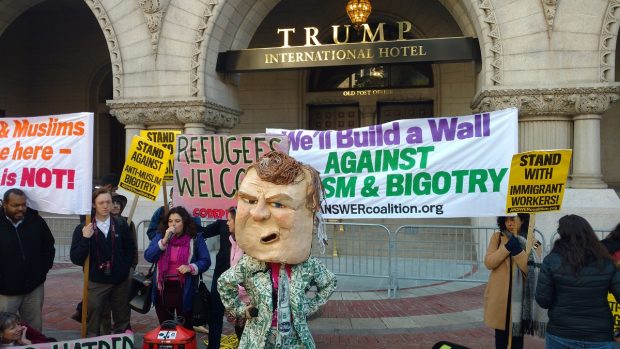 A number of the nominee’s supporters attended the protest and picketed the area where the anti-Trump activists gathered. Critics of the Trump campaign have questioned the rationale behind spending campaign time at a hotel venture this late in the election, however, a Trump spokesman said it serves to highlight his business experience.

“This is actually a monument to what Trump can do,” Don Davis, a Tennessee resident and Trump supporter, told TheDCNF. “He took a run down government building and turned it into a five star hotel. He’s done it all over the country, and I’d really like to see what he can do as president.” 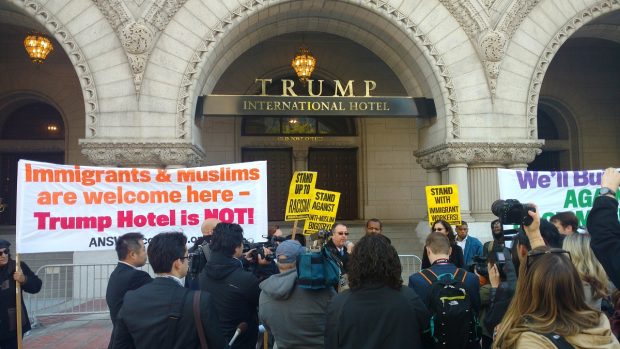 The hotel, built at the historical Old Post Office Pavilion, has been a rallying point for anti-Trump activists throughout the election. A soft opening for the property in early September drew similar crowds of angry protesters. Later in the protest activists gathered around the entrance to the hotel creating a barricade while people chanted, “If we don’t get no justice, you don’t get no peace.”

“This hotel in general is kind of a symbol of everything he stands for, you know, hate, bigotry and racism, which I don’t agree with,” said Hannah Jacks, a student at American University. “He’s not an ideal candidate, he’s not even an acceptable candidate.”