“Anybody know any progressive Occupy-type activists looking for a little quick work? If so, please meet me at Georgetown Harbor after sundown. There will be a bag and supplies waiting for you. If anyone asks, my name is Raul and you never got a last name. Thanks!” — Patrick Howley.

“Just asked Newt Gingrich what his feelings were on Harambe. He walked away.” — IJR‘s Benny Johnson.

A woman working for Trump walks into a bar…

“Nothing like having the bartender randomly ask you ‘why you canceled on Chuck Todd today?” #WeirdLife. Much love to Chuck, FYI.” — A.J. Delgado, aide to Donald Trump.

“’To me, sticking to facts and smart, fact-based analysis is the safe, smart place to be, he said via email. ‘But snark seems to be winning — decisively.'” — Jim VandeHei, founder of an undisclosed media startup, in a story by WaPo‘s Paul Farhi on journalists who openly insult Trump on Twitter.

“It’s almost like an arbitrary limit to one week offers an unfair and biased view. Somewhat ironic. And noticed you exempted WP journalists” — Ben White, Politico.

Journalist stuck at home because of rain and shitty footwear

“Promise not to laugh? I am literally stuck at my house because it’s raining and all of my shoes have holes in them. Every. Single. Pair.” — Bill McMorris, Washington Free Beacon.

So this @FarhiP piece implying journalists show anti-Trump bias on Twitter is poorly executed for the following reasons:

The majority of the examples are just clever assessments on what by standards of American politics is an incompetently run campaign.

The tweets don’t show partisan bias so much as a well-informed understanding of Trump’s campaign failures or examples of perfidy.

Finally, it might of been advisable for @farhip to at least note examples from some of his own colleagues, as well.

And directly to Farhi: “I didn’t say the topic wasn’t worthy of exploration. I said it was poorly executed. Just my assessment.”

Rep. Jason Chaffetz gets crap for changing his mind about Trump

“There’s a new morning routine for DC elites: Wake up, check for your name in WikiLeaks, wince.” — CNN Politics. See the story by Tal Kopan. 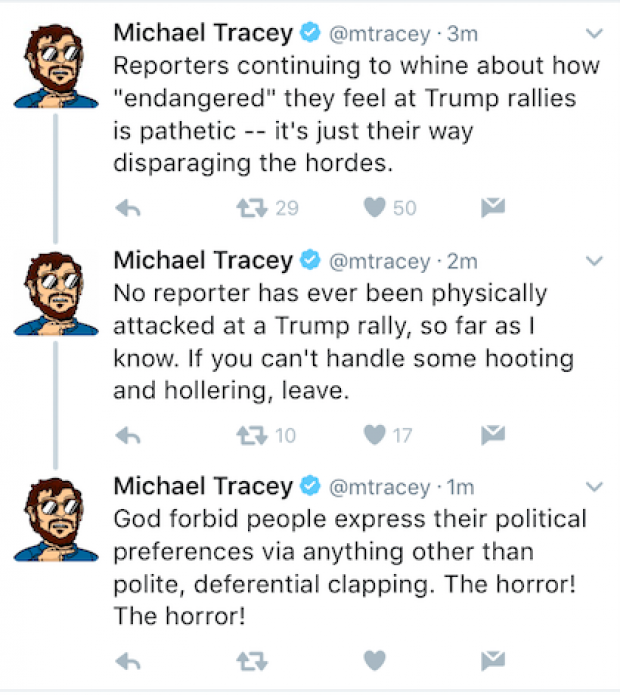 The Daily Beast blasted him with this story.

Halperin is totally ignoring the ridicule.