Harstad, of Harstad Strategic Research, made the appraisal in an email to Democratic presidential nominee Hillary Clinton’s campaign chair John Podesta on June 11, 2014. The correspondence was part of Thursday’s WikiLeaks release of Podesta’s emails.

Harstad suggested President Barack Obama call Graham to congratulate him on winning the Republican primary election during his fight for re-election in 2014.

“I presume it has occurred to you all, but I would urge the POTUS [President of the United States] to discreetly talk with Lindsay Graham [sic] in the next few days to congratulate him on his impressive primary win. He perhaps shouldn’t directly put a call into Graham — which would probably get out — but perhaps pass the word to invite Graham to call him. Graham is the best future Republican ally of the administration for the next two years, and in a close Senate may provide a critical vote on a number of occasions.” 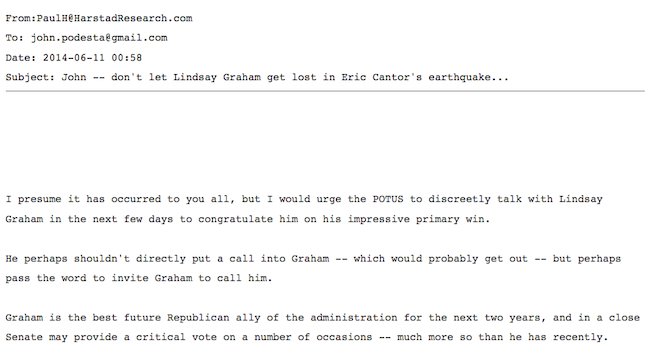 But Harstad seems aware that it might be problematic for a Democratic president to be seen as too friendly with a Republican senator: “Keeping the call discreet may be in Graham’s best interest and future latitude. You know far better than I how to make it happen, but I think it’s important that it happen.”

Graham has been one of the most vocal opponents of Republican presidential nominee Donald Trump, comparing him to anti-communist Sen. Joe McCarthy. Graham has refused to endorse Trump and last June he encouraged prominent Republicans who had endorsed the GOP candidate to rescind their support.

Harstad is described on his company website as having “the best win-loss record in November elections of any Democratic pollster in America.”