A top official at the Atlantic Council violated the think tank’s “ethos and policies” by not disclosing email exchanges with the Hillary Clinton campaign in which he offered himself up as a campaign surrogate and also proposed hosting an event that would be critical of Donald Trump.

The emails, sent by Peter Schechter, the director of the Atlantic Council’s Adrienne Arsht Latin America Center, raise questions about whether the think tank violated IRS regulations prohibiting tax-exempt 501(c)(3) organizations from engaging in political activity in support of or opposition to political candidates.

The emails were released earlier this month by the website DC Leaks. They were hacked from the Gmail account of Capricia Marshall, a Clinton campaign fundraiser and ambassador-in-residence with the Atlantic Council’s Adrienne Arsht Latin America Center.

In a March 17 email, Schechter offered his services as a campaign surrogate to Clinton campaign foreign policy adviser Jake Sullivan and his deputy, Laura Rosenberger.

He also proposed hosting a forum at the Atlantic Council which would focus on “US-Latin American relations in a Trump era.”

The event was held on June 27 at the Washington D.C.-based think tank. It was not an overt attack on Trump. Instead, Schechter and his panelists, which included four former George W. Bush administration officials, chipped away at Trump’s policy positions on immigration and trade with Mexico.

“Presuming an inevitable Trump nomination, I would try to get some well-known Latin American former presidents and ministers to participate in an event about ‘How Latin America sees Relations with US after Trump’s Success,'” Schechter wrote in the email to Sullivan and Rosenberger.

“At very least, we would get massive coverage on Spanish language media; though I think it would fly on mainstream media also.”

Sullivan liked the proposal, writing to Schechter that they were “very good ideas and we will follow up.”

“We should quickly figure out timing. Presume June is good,” Schechter wrote.

Schechter offered more in a March 28 email to Sullivan and Rosenberger.

“Foreign policy will play a role in differentiating HRC from others – particularly Trump,” he wrote.

“I want to work to make HRC even better able to exploit this difference,” he added, touting his foreign policy experience and asserting that he could serve as a press surrogate for the campaign.

Schechter’s offer to organize what he touted as anti-Trump programming appears to be a violation of the Internal Revenue Code, one expert on tax-exempt organizations tells The Daily Caller.

“The Internal Revenue Code provides that a tax-exempt public charity may ‘not participate in, or intervene in (including the publishing or distributing of statements) andy political campaign on behalf of (or in opposition to) any candidate for public office,'” Bruce Hopkins, a professor at the University of Kansas and a longtime consultant to non-profit organizations, told TheDC. 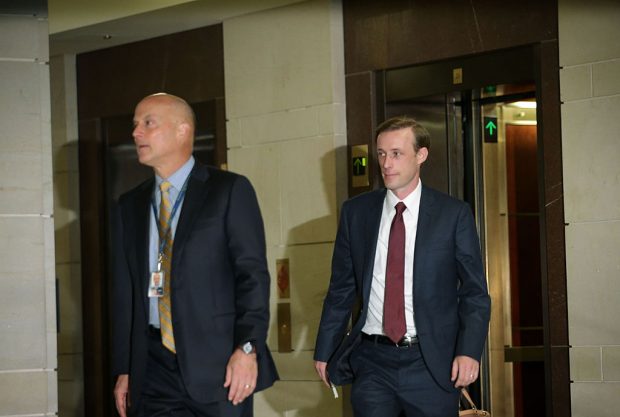 “Conducting a forum for the purpose of ‘hammering’ a political candidate seems to me to be a violation of this law.”

Violating the code can have drastic consequences for tax-exempt organizations, according to the IRS’s website.

“Violating this prohibition may result in denial or revocation of tax-exempt status and the imposition of certain excise taxes,” the IRS’s website reads.
It is unclear whether the Clinton campaign had any other input into Schechter’s event beyond Sullivan’s encouragement.

“Our employees, like other Americans, have responded to this extraordinary election year with a great deal of personal passion,” Hobbs said, adding that “Peter Schechter’s emails reflected that ferment.”

She added that the question of IRS violations “is moot” because “the Atlantic Council never organized any event targeted positively or negatively toward any candidate.”

“Our work on Latin America was true to that approach.”

She said that the June 27 event, which was called “Depoliticizing the US-Mexico Relationship,” included “the broad diversity of voices that is always our preference.”

Tom Ridge and Michael Chertoff, who served as secretaries of Homeland Security in the George W. Bush administration, were interviewed along with John Negroponte, a Republican diplomat, in a panel moderated by Washington Post reporter Mary Jordan.

Schechter hosted the second panel which included Carlos Gutierrez, a secretary of commerce in the George W. Bush administration.

Gutierrez was perhaps the most vocal Trump opponent.

“That’s where the Trump rhetoric is so alarming because if there are two things that have helped this economy for the last 200 years, it’s immigration and it’s trade and that’s the two things he wants to go after,” Gutierrez said in response to one question from Schechter.

Had it, the Atlantic Council’s conflict-of-interest policies regarding political campaign involvement would either have had to take leave from the think tank or conduct the surrogacy in his free time and without making reference to his day job.

But Hobbs did say that Schechter regrets not informing the think tank about his contact with the Clinton campaign.

“Mr. Schechter regrets that he didn’t inform his superiors of these email exchanges with the campaign, which were inconsistent with the Atlantic Council ethos and policies,” Hobbs told TheDC.

“In the end, however, the event he organized was consistent with our bipartisan approach, focusing on issues, and he never worked with or for the Clinton campaign.”