A branch of a prominent conservative gay advocacy group is questioning whether gay activists should really boycott the Yuengling brewery over the owner’s endorsement of Republican presidential candidate Donald Trump.

Richard “Dick” Yuengling, the fifth-generation owner of the oldest brewery in America, unofficially endorsed the nominee Monday when son Eric Trump was stumping throughout Pennsylvania.

“Our guys are behind your father. We need him in there,” Yuengling told Eric, according to the Reading Eagle.

Following the news of the support, tons of people took to social media to express disapproval of the endorsement and their intent to boycott the brewery’s alcoholic beverages.

One of the Keystone state’s first openly gay legislators, Brian Sims, wrote a fairly lengthy diatribe on Facebook condemning the brewery for its decision. 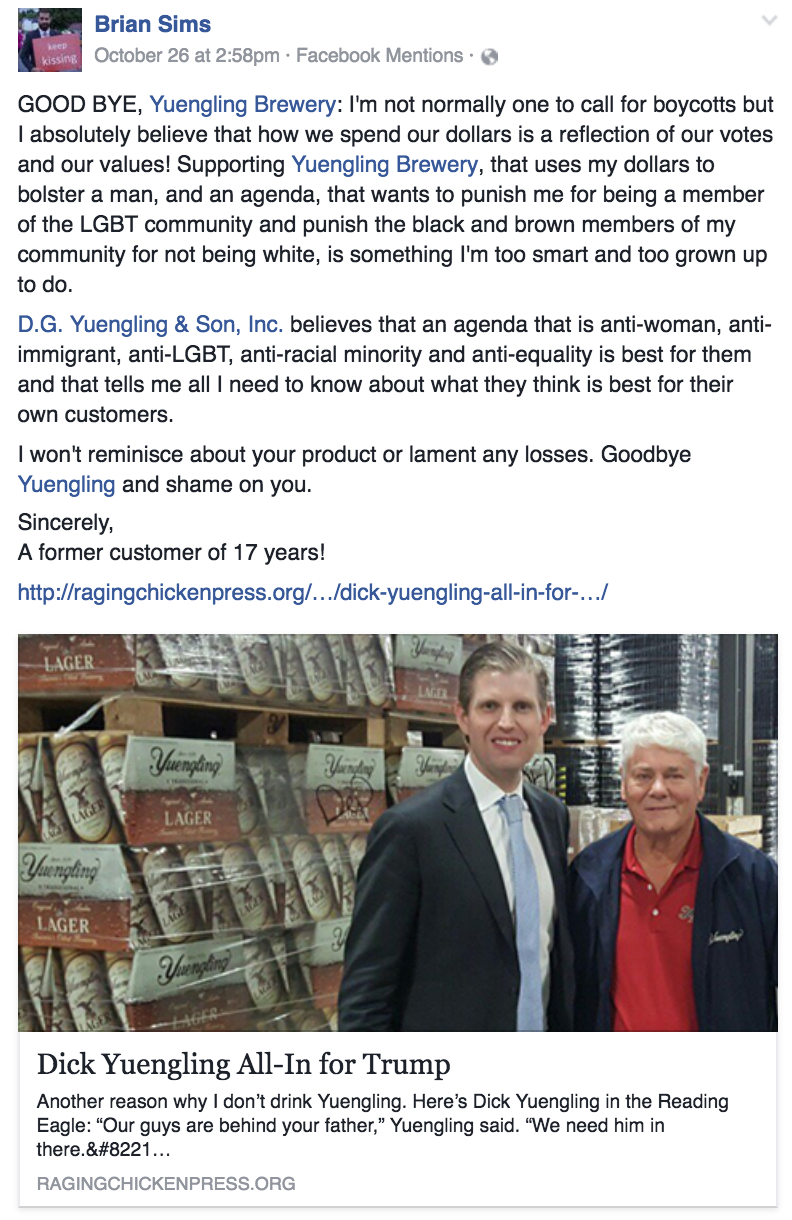 “Boycotts are a powerful and symbolic tool and should only be used in well thought out campaigns with clear and justified goals,” Chris Allen, President of the D.C. Log Cabin Republicans, explained in an email to The Daily Caller News Foundation.

Donald Trump is arguably one of the most pro-gay Republican candidates ever.

In a recent interview with The Daily Caller News Foundation, Gregory Angelo, president of the Log Cabin Republicans, called Trump the “most pro-LGBTQ nominee that the Republican Party has put forth in its history,” adding that Trump “has never distanced himself from the gay community.”

Allen agrees and questions if it is actually appropriate to protest the beverage company.

“Is it really justified to boycott a company that has supported our community for many years and most recently as a corporate sponsor of the 2016 Philadelphia Gay Pride, over the informal comments of support for a candidate, and not a specific LGBT related issue or stance,” Allen said in an email.

Allen calls the boycott a “knee-jerk” reaction that is “more about petty politics than principle.” He also outlines how Yuengling brewery is consistently supportive of the gay community, including being a corporate sponsor of “the 2016 Philadelphia Gay Pride.”

“We also thank D.G. Yuengling & Son, Inc. for their years of support for the LGBT community,” Allen concluded.