The University of Redlands has torpedoed student efforts to hold a “funeral” for the Halloween holiday, saying such a display would cause “emotional and psychological harm” to other students.

Redlands’ chapter of Young Americans for Freedom, a conservative group, wanted to hold the “funeral” as a protest against political correctness, which they claim has effectively “killed” the holiday.

But when they sought to have their event approved, they were told by school officials they would not be allowed to hold it because other students could find the event and the fliers advertising it triggering and offensive. (RELATED: Principal Bans Halloween Because It’s Maybe Religious Or Something)

“We aim to foster and ensure a safe and healthy student climate,” Assistant Director of Student Activities Dan Burfeind told YAF’s chairwoman in an email sent Friday. “The program and flyer you presented to use will leave [sic] to emotional and psychological harm to students, especially given the current campus climate.” 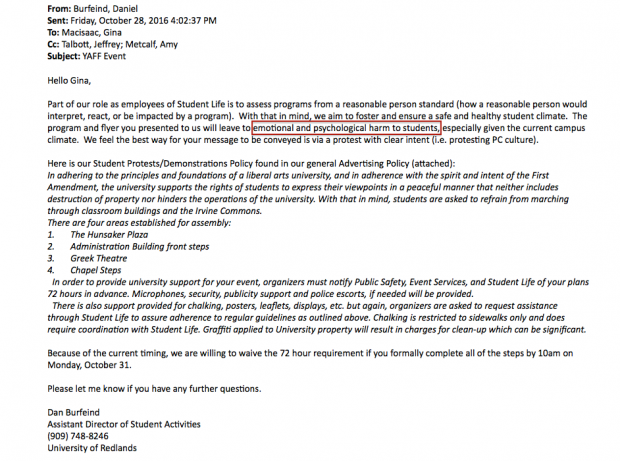 Burfeind took issue with a mock “obituary” (written by Young America’s Foundation, YAF’s parent group) YAF was going to distribute for the Halloween holiday, lamenting its supposed demise at the hands of political correctness, “humorless university administrators,” and “out of touch liberals who see racism in so many innocent aspects of everyday life:” 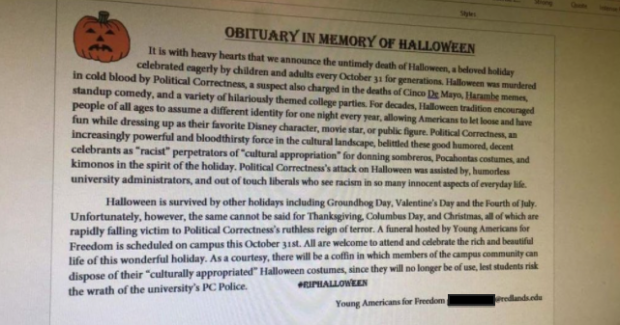 The YAF mock obituary for Halloween. [Courtesy of Young Americans for Freedom]

Burfeind said YAF would have to amend its flier and planned protest to something more generic (such as a general protest against political correctness, minus the mock funeral), or else they wouldn’t be allowed to hold their event.

“The intent of your protest should be to educate not to insight [sic] frustration/anger in people,” he said in another email message sent Sunday night.

Ironically, while shooting down YAF’s protest, Burfeind included the text of Redlands’ free speech policy, which states the school’s support for the First Amendment and welcomes all protests that are non-violent and do not disrupt the operations of the school (such as by parading through campus buildings).

“Of course, it’s highly unlikely Burfeind would ever enforce these selective and narrow restrictions on a liberal group proposing to host an event that could cause ‘frustration’ or ‘anger’ in conservative students,” Young America’s Foundation argued in a post on its website.