The email threads also show that Brazile, a former CNN contributor, revealed to the Clinton campaign the name of the person who provided her with a question that was asked of Clinton at a March 13 town hall co-hosted by CNN and TV One. Brazile also shared a question from a debate hosted by CNN a week earlier.

A March 12 email exchange shows Brazile stating that she received a town hall question from Roland Martin, a TV One host who co-moderated a March 13 town hall with CNN’s Jake Tapper.

A March 5 email shows that she shared a question with Clinton campaign chairman John Podesta and communications director Jennifer Palmieri that was to be asked in a March 6 debate hosted by CNN in Flint, Mich. 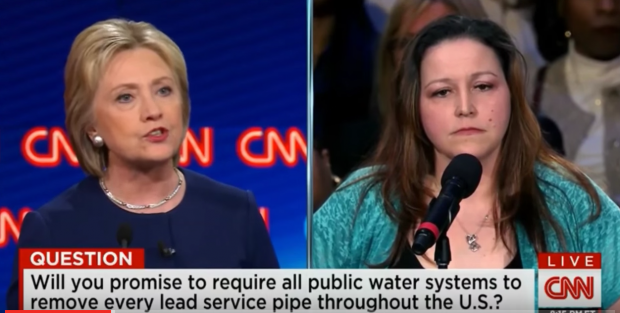 When part of the March 12 email was released earlier this month, Brazile initially vehemently denied that she shared a question with the campaign. “What a stretch,” is what she told The Daily Caller when asked about it. (RELATED: Donna Brazile Shared Town Hall Questions With Clinton Campaign)

She has since said that the email may have been doctored by Russian hackers. She also complained that she is being “persecuted” over the matter.

Brazile has recently stopped short of denying that she received the debate question and shared it with the Clinton campaign. But in an interview with PBS’s Tavis Smiley last week, she said that CNN did not provide her the question. Notably, she did not deny that Martin gave it to her. Martin has given waffling answers on whether he shared the question with Brazile. (RELATED: Donna Brazile Claims She’s Being ‘Persecuted’ Over Leaks To Clinton Campaign)

In the March 12 exchange, Brazile mentions Martin by name and offers to provide more than just the one town hall question that she is known to have shared with the campaign.

“I’ll send a few more. Though some questions Roland submitted,” Brazile wrote to Palmieri in the March 12 email thread, which is entitled “From time to time I get the questions in advance.”

The question she provided to Palmieri matched verbatim a question that an exonerated death row inmate asked Clinton the next night.

CNN and host Jake Tapper have strongly denied sharing that question or any other with Brazile or anyone else.

But an email released on Monday casts new doubt on the network’s claims that it never shares questions with outsiders.

On March 5, Brazile tipped the Clinton team off to a question that was to be asked the next day at a debate that was hosted by CNN’s Don Lemon and Anderson Cooper.

“One of the questions directed to HRC tomorrow is from a woman with a rash,” Brazile wrote to Podesta and Palmieri.

“Her family has lead poison and she will ask what, if anything, will Hillary do as president to help the ppl of Flint.”

A transcript of the debate shows that two women whose families were afflicted by lead poisoning, Lee-Anne Walters and Mikki Wade, asked questions about the water crisis of both Clinton and Sanders.

“After my family, the city of Flint and the children in D.C. were poisoned by lead, will you make a personal promise to me right now that, as president, in your first 100 days in office, you will make it a requirement that all public water systems must remove all lead service lines throughout the entire United States, and notification made to the – the citizens that have said service lines,” Walters asked. (RELATED: Jake Tapper Says DNC Chair’s Town Hall Leak Is ‘Very, Very Troubling’)

Brazile, who claimed during the Democratic primaries that she was neutral, has defended herself during the email controversy by claiming that she was in regular communication with all Democratic candidates. But there has been no evidence produced so far that she shared debate and town hall questions with Sanders.

Neither Brazile nor the DNC returned requests for comment.

Update: CNN slammed Brazile in a statement while denying that the network leaked any information.

“CNN never gave Brazile access to any questions, prep material, attendee list, background information or meetings in advance of a town hall or debate,” Lauren Pratapas, a spokeswoman for the network, told TheDC.

“We are completely uncomfortable with what we have learned about her interactions with the Clinton campaign while she was a CNN contributor.”

She said that CNN accepted Brazile’s official resignation on Oct. 14. The longtime Democratic consultant’s deal was suspended in July when she became interim head of the DNC.

Questions still remain about how Brazile obtained the question in advance of the debate. TheDC is told that a CNN employee spotted Brazile talking with a Flint resident at a community event on March 5, the day before the debate. The woman allegedly mentioned to Brazile that she had a rash and that she and her children suffered from lead poisoning.

It is still unclear whether that woman was Lee-Anne Walters and how Brazile would have known that she would appear at the debate and be asked to pose a question to Clinton and Sanders.

Brazile commented on the scandal on Twitter. She also referred reporters to comments she made on Oct. 11, after her leak to the Clinton campaign was first revealed. She denied leaking questions to any candidate in that statement.

Update: TheDC reached Walters by phone on Monday. The mother of four, who helped bring Flint’s lead crisis to national attention, walked TheDC through her communications with CNN ahead of the debate during a phone interview on Monday.

Walters searched back through her text messages and told TheDC that she was first contacted by CNN on Feb. 25 by someone who identified themselves as Danelle.

Walters says that she was told on Feb. 29 that she had been selected to ask a question at the debate. She submitted three questions. On March 5, the day of the Brazile email, Walters told Danelle through text message which question she wanted to ask.

Asked if she was the woman who CNN says Brazile may have talked to at the community event on March 5, Walters says that she is “99 percent sure” that she did not talk to Brazile.

TheDC reached out to Mikki Ward through email but was not able to get in touch with her.

CNN declined to talk on the record about Walters’ claims about the text message exchanges with the network staffer. Pratapas referred back to the network’s statement from earlier in the day.