Schmidt sent the memo to Clinton aide Cheryl Mills on April 15, 2014, more than a year before Clinton formally announced her candidacy in June 2015. The email was published Monday by WikiLeaks under the heading “Notes for a 2016 Democratic Campaign.”

“The campaign headquarters will have about a thousand people, mostly young and hardworking and enthusiastic. Its important to have a very large hiring pool (such as Chicago or NYC) from which to choose enthusiastic, smart and low paid permanent employees,” Schmidt wrote.

He also recommended moving the campaign team out of the nation’s capital and finding an employment pool of people “dying to work” for the campaign.

“DC is a poor choice as it’s full of distractions and interruptions,” Schmidt wrote. “Moving the location from DC elsewhere guarantees visitors have taken the time to travel and to help. The key is a large population of talented people who are dying to work for you. Any outer borough of NYC, Philadelphia, Atlanta, Boston are all good examples of a large, blue state city to base in.” 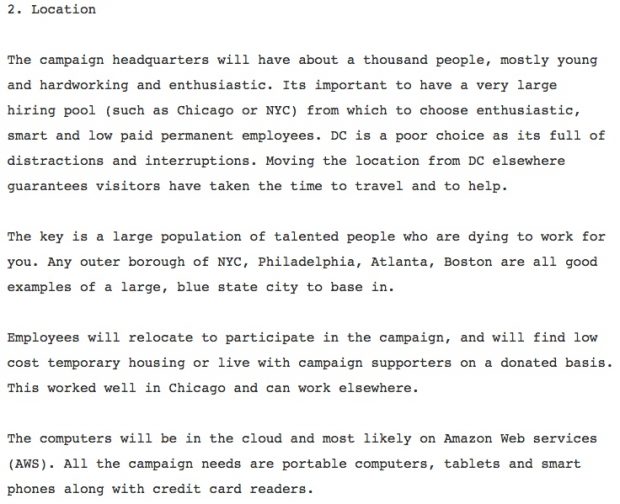 Google has been criticized in the past for collecting and sharing data from its users. Schmidt, as a former company czar, is especially careful to advise the Democrats to compile voter information banks based on information available from their personnel communication devices.

“Key is the development of a single record for a voter that aggregates all that is known about them. In 2016 smart phones will be used to identify, meet, and update profiles on the voter. A dynamic volunteer can easily speak with a voter and, with their email or other digital handle, get the voter videos and other answers to areas they care about (‘the benefits of ACA to you’ etc.).” 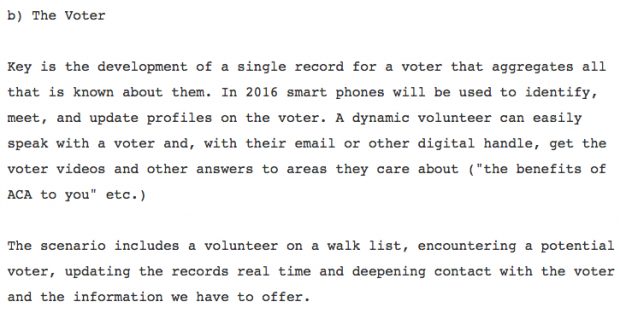