Imagine that the Trump campaign, the RNC and shadowy “political action” groups conspired to send people to Hillary Clinton’s rallies for the sole purpose of causing violent confrontations. If they did, Trump would no longer be a candidate for president. Not so on the other side.

Meet Bob Creamer. In the first Project Veritas Action video, we learned that Bob Creamer was a political operative involved in paying and training actors to cause violence as fake “protesters” at Trump events. He was working with the DNC and Hillary Clinton campaign through his own side organization, Democracy Partners. The violent interactions between these paid actors and real Trump supporters were in turn broadcast by the mainstream media as evidence that Trump was causing violence with his “dangerous” rhetoric.

The biggest operation Creamer and his team pulled off was the Chicago “protest” that resulted in multiple injuries—including injuries to a police officer (pictured below)—and even cancellation of the rally. 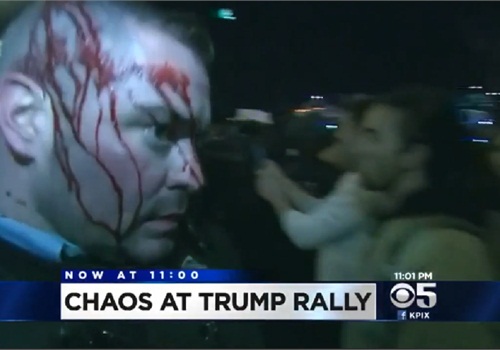 The “protesters” at the Chicago rally identified themselves at the event as Sanders’ supporters, shouting chants of “Bernie! Bernie!”

The mainstream media claimed such violence was “hardly surprising” and “entirely predictable,” suggesting that Trump was the one provoking the violence.

We now know none of this was true. Veritas has confirmed that violent protesters were goons hired to incite violence by the Clinton campaign, DNC and Bob Creamer’s Democracy Partners.

Over the past few days, Katica and I engaged in some internet sleuthing that proves (1) Bob Creamer is connected to a who’s who of sleazy Democrat politicians and the DNC itself and (2) he was once married to the sister-in-law of one of Hillary’s best friends.

Before he opened the deceptively-named Democracy Partners in 2011, Creamer ran a similar company named Strategic Consulting Group. The website for the company is still up, as well as the owner’s bio, client list and a description of services offered.

In his bio, Creamer brags about working for the Democratic National Committee in 2008 as National Coordinator for “field based rapid response” to Republican candidates McCain and Palin.

Notably, during that period several violent encounters occurred at McCain-Palin rallies (such as this one). Just like they did with Trump, the media narrative painted McCain-Palin supporters as violent racists and the campaign as one that was out of control. Given the DNC’s current involvement in “rapid response” thuggery at Trump events, it’s a safe assumption that the same scenario may have played out in 2008.

What can these politicians and groups get for their money? Among other services, Creamer’s clients could employ him for “field for issue campaigns,” which include “actions” at the offices of “public officials” and “rallies.”

In the third Project Veritas Action video, Creamer discussed having direct access to the Hillary Clinton’s campaign. He said he participated in phone conferences every day with the Clinton campaign. He even claimed to be getting orders from Hillary to create a bizarre “Donald Duck” campaign about Trump’s tax returns.

The Clinton campaign and media have sought to downplay Creamer’s connections to Hillary as bragging and exaggeration, as if though he were bragging about access he didn’t have with a candidate he didn’t even really know, thereby implying that Hillary had nothing to do with Bob Creamer. However, Creamer has been at the top of the Democrat Party circles for years, and even has a past marital connection to Clinton.

Bob Creamer is currently married to a Democrat representative in Congress, Jan Schakowsky, who represents the 9th District in Illinois, which covers suburban areas north of Chicago.

Before his marriage to Schakowsky, Creamer was married to Day Piercy. Day was the sister of Glenn Piercy, who passed away in 2008. When he passed, Glenn Piercy was married to Jan Piercy. Jan was Hillary Clinton’s college roommate at Wellesley College in the 1960’s.

While this sounds like six degrees of separation, it isn’t. Day Piercy was quoted at length in a USA Today article in April 2016, praising Hillary and criticizing Sanders after an event in New York. Her former sister-in-law Jan Piercy worked in Bill Clinton’s administration. Jan is mentioned several times in Hillary’s “work related” emails during the latter’s tenure as Secretary of State. Jan was described as a “close friend” of Hillary Clinton as recently as August 2016. Jan arranged at least one meeting between a billionaire donor to the Clinton Foundation and Hillary Clinton. Jan even forwarded an email to Hillary from Day Piercy while Hillary was Secretary of State.

It is difficult to imagine that Creamer was a virtual stranger to Hillary Clinton, considering that he was married to her good friend’s sister-in-law. Further, Creamer visited the White House 342 times—and with President Obama directly 47 times—during the Obama presidency. The Veritas videos indicate he was involved with daily calls with Hillary’s campaign. All of this suggests Creamer operates at the very top of the Democratic Party power structure, and that he would not be exaggerating his access to Hillary Clinton on the videos.

Provoking violence at an opposition party’s rallies is something only a dictator would do, and media complicity in that violence is something that only happens in a dictatorship. The Veritas tapes and WikiLeaks revelations should merit an aggressive investigation by the FBI into the Clinton campaign, DNC and Democracy Partners. Unfortunately, we have a government that is so corrupt that not even inciting violence against its own citizens and police officers or massive fundraising irregularities are enough to prompt the president to act or the media to care.

It’s becoming clearer and clearer that nothing will change until we drain the swamp.