Alicia Machado said Donald Trump is a danger to women. 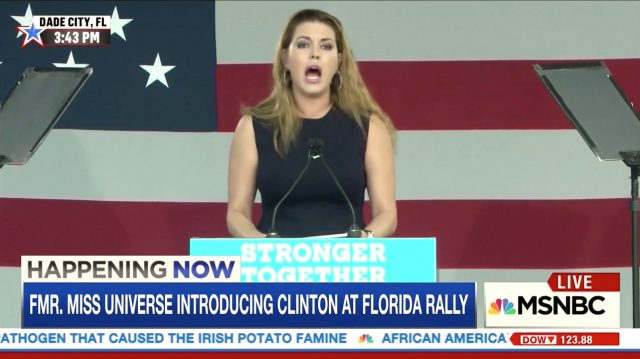 The former Miss Universe — who made multiple headlines after Hillary Clinton brought up her name during the first presidential debate — attacked the Republican nominee as she introduced Clinton at a rally in Florida Tuesday.

“You know, I was at home with my mom and my daughter watching the first presidential debate when I was absolutely surprised to hear Hillary Clinton say my name,” Machado said. “It was such an honor. During that debate, Hillary said about me — and I quote — ‘She has become a U.S. citizen, and you can bet she is going to vote this November.'”

“Well, she’s right.” (RELATED: When Megyn Kelly Asked Miss Universe This Question About Donald Trump, She Had No Answer)

Machado recalled the insults that Trump allegedly made towards her when she was Miss Universe.

“I was the first Miss Universe after Trump bought the pageant,” she said.

“It was such a gift, an honor, to represent my country Venezuela and to be Miss Universe 1996, but I was only 18 years old, a little girl. There was still so much I didn’t know. Trump was overwhelming. I was scared of him. He made fun of me and I didn’t know how to respond. He told me that I looked ugly and I was massive. He even called me names. He said to me, Miss Piggy, Miss Housekeeping, Miss Machine. Soon — soon it became a joke. Alicia Machado was a fat Miss Universe. It was really painful for me. He was cruel. For years afterwards I was sick, fighting back eating disorders.” 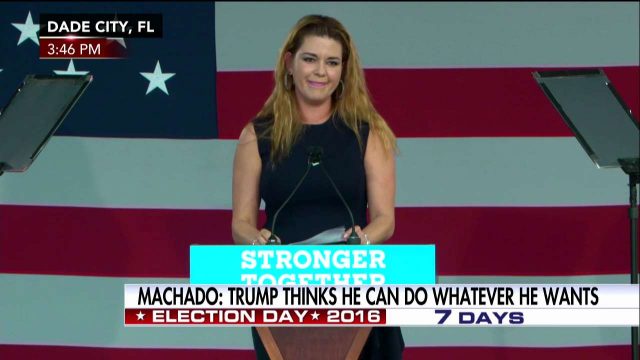 “He thinks he can do whatever he wants and get away with it,” she told the crowd. “I’m standing here on behalf of women and Latinos in the country who have been horrified with his dangerous ideas and vision of America. And together we are going to say, loudly and clearly, no Trump. He’s not getting away with it.”

Clinton then thanked Machado for the introduction.

“I want to thank Alicia Machado for that introduction and for sharing her story with us,” Clinton said as she took the stage. “Alicia will be voting for the very first time in this election and I am very grateful for her support.” (RELATED: Alicia Machado Was Just Spotted On The Red Carpet For First Time Since Feuding With Trump)