One of the great things about living in 2016 America is that you can self-identify as anything you want. For example, if you were born as a male, and you spent your first six decades or so as a male, it’s never too late to declare that you’re actually female. Even better: Everybody else is obliged to publicly and enthusiastically agree that you’re female and always have been! So even if you… oh, let’s say even if you won an Olympic gold medal in a male category, and made a fortune from it, 40 years later you can claim that you were actually a woman when you did it.

And anybody who questions you in any way is a bigot.

With that in mind, I’m happy to pass along the following news about Rachel Dolezal: 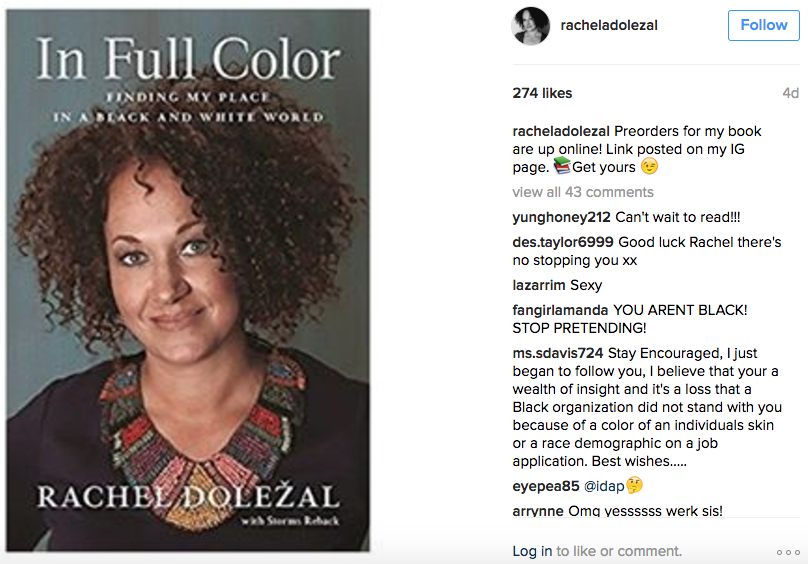 The book is called In Full Color: Finding My Place in a Black and White World. You can learn more about it at her brand new site, racheldolezal.com.

I applaud Ms. Dolezal for standing up for herself and refusing to let other people tell her who and what she can be. She continues to face the most disgusting, hateful rhetoric because of her self-identification. No matter how far we think we’ve come as a society, there are still some small-minded people who can’t let go of the old ways.

Rachel Dolezal is black. She has always been black, even when she wasn’t black. Now you need to just accept that, show her some respect, and call her what she prefers to be called. Don’t hurt her feelings. Or else you’re a bigot.

P.S. See? Anybody can be anything, at any time, for any reason.

i now identify as a woman
THAT'S WONDERFUL AND BEAUTIFUL AND WE SUPPORT YOU
specifically, a black woman
WHOA HOLD ON THERE BRO

i now identify as a woman
THAT'S WONDERFUL AND BEAUTIFUL AND WE SUPPORT YOU
specifically, a black woman
WHOA HOLD ON THERE BRO