Sure, the right wing’s line on FBI Director James Comey has undergone somewhat of a reversal since the announcement of a renewed investigation into Hillary Clinton’s emails. But nothing quite compares to the sudden replacement of measured, high-minded praise with breathless lamentations from liberal leaning media.

Now, among the liberal elite, there’s even whispers of prosecuting Comey, one-time unassailable, nonpartisan arbiter of law, under the “Hatch Act.”

The coverage of Comey overall is an incredible display of political bias in media, highlighting how journalists at both liberal and conservative outlets can come to a completely different reading of the same facts.

Here’s a sampling of how these media powerhouses regarded Comey’s announcement in July he would not recommend charges against Clinton.

“The careful approach to publicly explaining his thinking fit a pattern for Mr. Comey, who, throughout his three decades as a law enforcement official, has refused to shy away from politically fraught issues,” reported The New York Times, noting he was “immediately praised” for his “candor and transparency” after the announcement.

The Washington Post credited Comey as a “plain-speaking” nonpartisan straight shooter, while Vox smothered him in love, calling it “difficult” to successfully characterize Comey as a partisan hack.

A jubilant Huffington Post went well over the top: “Comey, a 6-foot-8 Irish-American with impeccable bipartisan (but mostly Republican) credentials, has effectively avoided turning the nightmarish circus of the 2016 campaign into a full-blown apocalypse.”

Journalists at these outlets quickly changed their tune following Comey’s decision to drop a bombshell 11 days before the election. After previously hailing Comey’s judgment and character, some journalists were quick to accuse him of intentionally trying to influence the results of the election.

“I’ve long believed in Comey’s integrity,” Dana Milbank wrote in The Washington Post. “But if he doesn’t step forward and explain his October Surprise, he may inadvertently wind up interfering in the political process — perhaps even reversing the outcome of a presidential election — in a way that would have made J. Edgar Hoover gape.”

New York Times columnist Paul Krugman also accused Comey of “trying to swing” the election in a furious tweet storm after the news broke, calling his behavior “inexcusable.” In a column Monday, he declared Comey has “destroyed his reputation.”

The Washington Post editorial board demonstrated perhaps the most stunning reversal. The July headline: “Republicans attack Mr. Comey for doing his job”. And following his announcement Friday: “The damage Comey’s bad timing could do”.

In July, The Huffington Post went so far as to levy blogging’s most overused trope, “dismantled” in a headline. “FBI Director Dismantles Most Damaging Claims Against Clinton,” followed by the ever-measured “Presidential Election Not Total Chaos.”

Now, The Huffington Post appears to be having a complete meltdown. 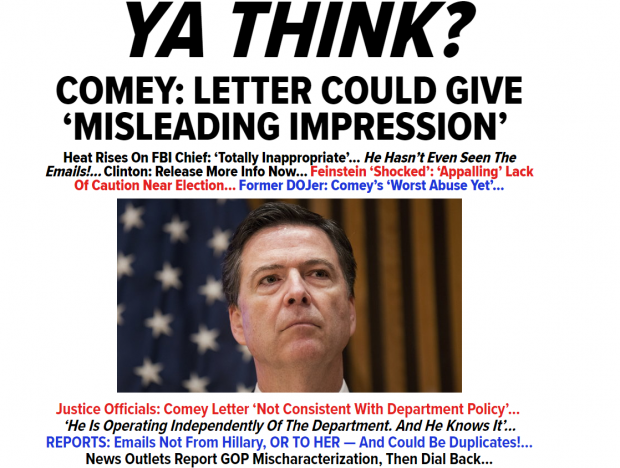 A slightly calmer, if not ironic, assessment from Vox, a website that “explains” things, asserts simply that the once unassailable head of America’s top investigative bureau “needs to explain himself.”

Straight news headlines reflect the shift in opinion as well. The Washington Post and a host of other outlets including CNN, Bloomberg and The Wall Street Journal are playing up an accusation from Democratic minority leader Harry Reid accusing Comey of violating federal law by sending the letter to Congress.

Of course, it’s not just journalists at liberal outlets who are revealing how much personal politics sway their reading of the facts, and that’s what makes the Comey case such a great example of media bias. Conservative-leaning outlets and journalists are now the ones justifying Comey’s decision and defending him from attacks coming from the other side of the aisle.

The Washington Times questioned Comey’s judgment when he decided not to recommend charges against Clinton. “On Hillary emails, Comey’s evidence clashes with Comey’s conclusions,” one piece read. But now the outlet is in effect defending him in a piece apparently aimed at softening the blow from a number of former prosecutors calling his latest decision into question.

“FBI Rewrites Federal Law to Let Hillary off the Hook,” read a headline from the National Review following Comey’s decision not to recommend charges. But in the wake of his decision to resume the investigation? The same reporter headlines a piece “Comey Is Not the One Whose Unorthodox Actions Are Causing a Cloud over the Election.”

Laura Ingraham and other conservative commentators questioned the integrity of Comey’s decision not to recommend charges, implying some level of corruption within the Justice Department and the Clinton campaign, if not the FBI. Fox News ran interviews with House Speaker Paul Ryan and former FBI assistant director James Kallstrom and others explaining why Comey’s decision didn’t make sense to them given the facts he found.

That criticism from the right has turned to something more like a smug silence following Comey’s latest decision. The whole thing appears to have swung full circle, although the shift in opinion is decidedly more pronounced on the left.

“Everyone talks about what Comey did as being outrageous,” MSNBC’s openly liberal Mika Brzezinski said on Morning Joe Monday. “This was a great, credible man, with great integrity a week ago. So I don’t really get that. What if there is something there? We’re not going to say it was so outrageous.”

“I was stunned by the reporting this weekend,” added her Republican cohost Joe Scarborough.