The women of “The View” turned on Kellyanne Conway Wednesday — calling her “delusional” and saying they didn’t care if Donald Trump “ever came back on the show.” 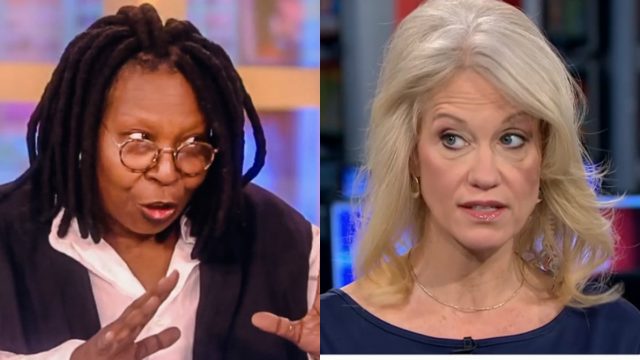 Donald Trump’s campaign manager sparred with Joy Behar and Whoopi Goldberg as she appeared on the daytime talk show just six days before the election.

Behar told Conway she was being “delusional” because she defended Trump’s comments about nuclear weapons.

Goldberg verbally attacked Conway when she accused the Clinton campaign of celebrating her lead in the polls a little too early.

[dcquiz]  “So many people shouldn’t have been getting their inaugural ball gowns and popping their champagne corks prematurely,” Conway said.

“Didn’t you guys say the polls were rigged?” Goldberg asked.

“And you love the media now too, yes?” Goldberg asked. “You remember he said we were all crooked.”

When Conway mentioned that Trump might come on the show again if he wins the presidency, Goldberg said, “I don’t care if he ever comes back on this show.”

“He’s been very nasty about people I care about.”