A Clinton Foundation memo released by WikiLeaks on Friday suggests that one-on-one meetings with Bill Clinton cost participants upwards of $100,000.

The Dec. 7, 2012 memo is included in a batch of documents prepared in advance for a Clinton Foundation board meeting held several days later in New York City.

It shows that Joe Kiani, the founder of medical device maker Masimo, and Alex Karp, the CEO of software company Palantir Technologies, paid $140,000 and $100,000, respectively, for a “Meeting with WJC.”

WJC is William Jefferson Clinton. Hillary Clinton was serving as secretary of state when the memo was written.

The document, which was hacked from the Gmail account of Hillary Clinton campaign chairman John Podesta, who once worked for the Clinton Foundation, was crafted to lay out the organization’s plan to raise $250 million for an endowment project for the Clinton family non-profit.

“The Foundation’s long-term sustainability cannot be possible without a significant and well-managed endowment,” the memo reads. “Earlier this year, we began the critical first steps towards crafting a detailed and well-informed endowment campaign plan.”

The document lists dozens of donors. The individuals and organizations shaded in blue were new contributors, the memo states. It also lists “reason for gift” for each donor. 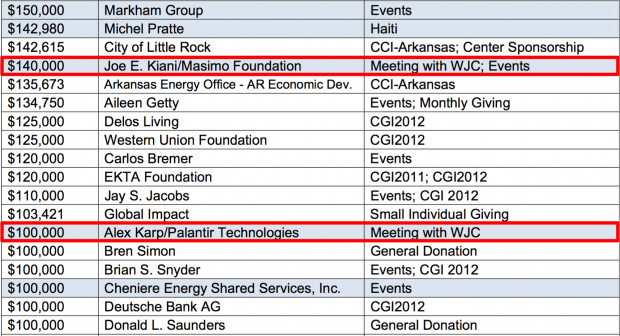 Kiani, who also ran a foundation connected to his medical device company to promote patient safety, would go on to pay Clinton $630,000 for speeches he gave in 2013 and 2014.

[dcquiz] Clinton has praised Kiani’s patient safety initiative, which the entrepreneur announced at a Clinton Global Initiative summit in 2013. But those efforts have come under scrutiny. In 2014, NPR flagged a Food and Drug Administration report which found that Masimo failed to investigate dozens of claims about defective devices. Masimo disputed the FDA’s findings, according to NPR.

After Karp’s meeting with Clinton, Palantir would go on to partner with the Clinton Foundation and the Clinton Global Initative to analyze the non-profit’s various projects. The arrangement has drawn some interest because Palantir was co-founded by Peter Thiel, a libertarian venture capitalist who now supports Donald Trump for president.