Written by longtime Bill Clinton assistant Doug Band, the Nov. 12, 2011 memo lays out the complex relationship that Clintonworld had with Marc Lasry, a billionaire who then owned a majority of the debt for American Media Inc., which publishes the National Enquirer.

“Mr. Lasry, like other Foundation donors, has a multifaceted relationship with the Foundation and the President,” reads the memo, which Band sent to two lawyers who were conducting an internal audit of the Clinton Foundation.

As part of that “multifaceted relationship,” Lasry contributed to the Clinton Foundation, hosted fundraisers at his home, hired Chelsea Clinton at his hedge fund, Avenue Capital Group, and helped Chelsea’s husband raise money for his own hedge fund.

The billionaire also used his financial leverage over National Enquirer to quash stories that portrayed Bill Clinton in a negative light, Band wrote.

“He has been helpful on a number of fronts,” wrote Band, who then listed Lasry’s help for the Clintons. 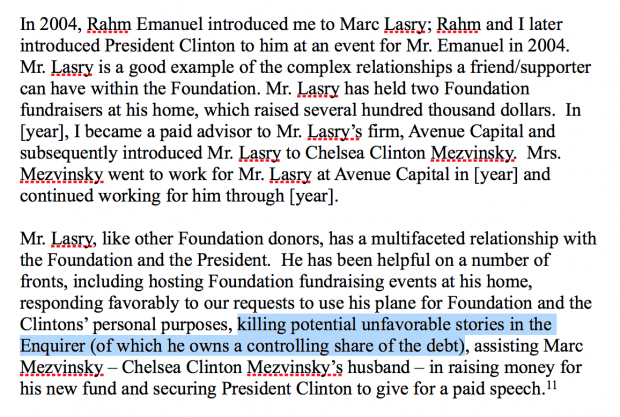 The section about Lasry was removed from the final version of Band’s memo, which was also sent to Bill and Chelsea Clinton and to John Podesta, a Clinton Foundation adviser at the time and Hillary Clinton’s campaign chairman.

It is unclear what stories Lasry forced the tabloid to scrap, though they most likely dealt with allegations of affairs or sexual misconduct.

The revelation laid out in the memo, which was published by WikiLeaks on Sunday and was hacked from Podesta’s Gmail account, is the latest to show parallels between Bill Clinton and Republican presidential candidate Donald Trump.

Earlier this week, The Wall Street Journal reported that the National Enquirer paid $150,000 to a former Playboy playmate who claimed that she had an affair with Trump in 2006. The real estate billionaire was married by that time to his wife Melania.

The National Enquirer, which is still published by American Media Inc., did not publish the story. The company’s CEO, David Pecker, is a friend of Trump’s and has supported the real estate billionaire’s presidential campaign. Lasry’s hedge fund no longer holds a financial stake in the company.